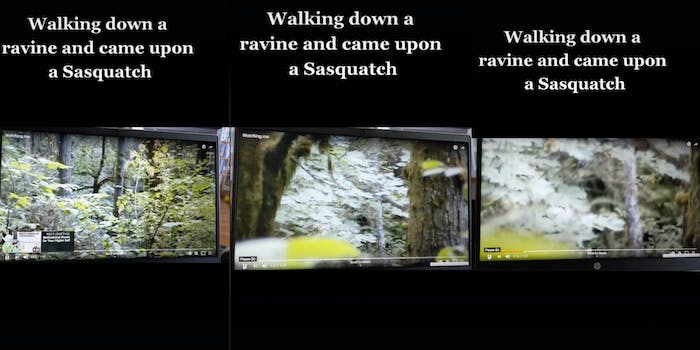 ‘It’s clearly keeping an eye on me’: Hiker posts TikTok of his supposed Bigfoot sighting

‘I didn’t want to get any closer to make it nervous or anything.'

Mike Bodewitz, a hiker in Oregon, recently shared a TikTok video that he thinks captures evidence of another “Bigfoot” sighting.

In a series of videos, Bodewitz says that he saw the creature in mid-April. In one video, he says the sasquatch is “watching” him. His most recent video claims he saw Bigfoot as he was walking to a ravine.

Bodewitz admits he cannot see any of the alleged Bigfoot’s facial features; he also says he’s not sure if the creature was a male or female.

But he’s still convinced: “I saw it with my own eyes,” he said. “I didn’t want to get any closer to make it nervous or anything, but it’s clearly keeping an eye on me. I felt that I needed to back away and move further up the hill to give it some space.”

Some commenters applauded the discovery: “Saw one years ago. They are really fast. REALLY fast,” one wrote. “It took off up a steep hill like nothing I’ve ever seen. Wish I had more than a flip phone then.”

But many viewers weren’t sold, according to Pop Culture. “This could be literally anything,” one person wrote. “Nothing is showing anything specific for people to be so excited about … just some fur between the bushes.”

“The only thing I see moving is the camera,” another said. “How can you determine what that is when the view is obstructed and the camera is so shaky?”

Their skepticism isn’t unfounded: Oregon is among the states with the most Bigfoot sightings, according to the Bend Bulletin. And there have been reported sightings from the Florida panhandle all the way to West Virginia and Northern California.