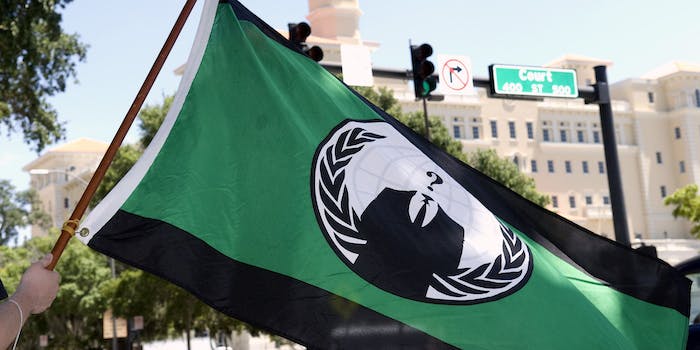 Anonymous factions could go to war over Australian hacks

Australian members of the hacktivist collective Anonymous launched a hacking campaign called #OpAustralia earlier this year to combat government spying. Now they’re issuing a plea to their Indonesian counterparts to cease their cyberattacks on the country’s businesses and nonprofit charities.

Indonesian Anonymous members defaced and otherwise attacked 178 private businesses, as well as a handful of charities that deal with childhood cancer and other issues, in response to news that Australia cooperated with the U.S. National Security Agency to spy on the majority Muslim country.

The video statement from Anonymous Australia asked Indonesia’s hackers to be reasonable and threatened them if they didn’t.

“Anonymous Indonesia,” the familiar computer-altered voice said, “you have defaced many innocent Australian websites in an effort to protest against the Australian government and their spy agency, ASIO. Innocent businesses should not be attacked. We are all bound together in an effort to bring down our tyrant governments, to shape our world as a better place. We bid you, as a fellow brother, to focus on your main target, governments and spy agencies. Leave the innocent bystanders out of this. If you choose to disagree then you should feel the full wrath of our fellow legion.”

Anonymous group fighting with anonymous group must be seen as a positive by government intelligence agencies, whose sites might be left alone during the distraction.

The original #OpAustralia hackers took down government sites to protest a surveillance measure,  attacked Coca-Cola as a protest the influence of the multinational in a failed recycling measure, hit the tiny island nation of Nauru for its part in the way the Australian government treats refugees, and even saw a 17-year-old hacker arrested for participating.