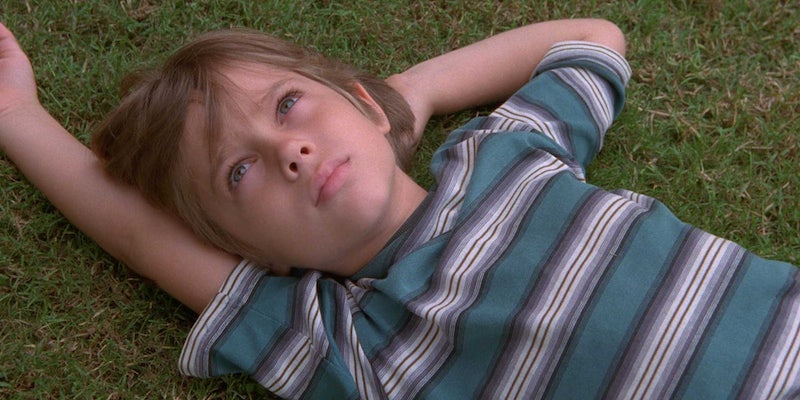 The one scene in ‘Boyhood’ no one is talking about

The movie's treatment of childhood is meant to feel universal—but for whom?

I went into Richard Linklater’s much-praised film, Boyhood, with high hopes. I was a fan of his Before trilogy and intrigued by the gambit of filming over 12 years. I knew of its rare perfect score on Metacritic, even if some of the reviews felt over-the-top. (The Daily Dot itself shared the most hyperbolic sections from those glowing reviews: “Nothing will ever be this good again,” declared Hitflix.) While I enjoyed the performances—especially, those of Ellar Coltrane and Patricia Arquette, who play the lead Mason and his mother Olivia, respectively—I left the theatre wondering if I had seen the same film as the critics, particularly in the way the lives of some secondary characters were portrayed.

About midway in the film, Olivia, a professor at a small town Texas college, has to replace a crumbling pipe on her property and calls two nameless Hispanic laborers. One, in broken English, explains that she needs to replace it with a stronger pipe. This appears an entirely routine conversation, but it wows Olivia sufficiently to tell him something along the lines of: “You’re so smart. You should go to school!” The scene lasts for 39 seconds.

Near the end of the film, about three years later in the plot, Olivia and her now fully grown children are in a restaurant, when Ernesto, the former laborer, approaches the table and tells her she “changed his life.” Since their first meeting, he became fluent in English, landed a job as an assistant manager at the restaurant, and has begun working toward his bachelor’s degree.

It’s no coincidence Ernesto appears as Mason is thinking about his future. Boyhood is about how America shapes its men, whether it turns them brittle like Olivia’s two alcoholic exes, or tames and settles them like Ethan Hawke’s character, Mason Sr. Each man represents a potential path for Mason to travel.

In this sense, Ernesto embodies the American dream, pulling himself upward in class by willpower. Part of the allure of America is its belief in itself as the land of opportunity with an optimism that anyone can succeed, even if the deck is stacked against them. Ernesto acts as reminder that non-whites desperately work to have the life Mason, a photography major, takes for granted. He also recalls a lecture Mason’s teacher gives earlier in the film about how even less-talented people can get ahead by sheer perseverance.

The reunion with Ernesto is a pointedly on-the-nose scene and highly processed feel-good moment in a film that mostly avoids them. Yet the problems run deeper than that. Logically, it feels like a stretch: the initial exchange so brief and minor that his evolution feels unearned. Worse, Ernesto’s journey relies on an audience that has internalized the idea that Olivia’s words could have such effect, a trope on race and class called-out incisively by the show Cougar Town: “If there’s anything we’ve learned from Michelle Pfeiffer in Dangerous Minds or Sandy Bullock in The Blind Side or Hilary Swank in that movie nobody ever saw, it’s that all you need to fix minority problems is a really pretty white woman.”

Furthermore, Ernesto’s return comes, plotwise, at a time when Olivia’s now adult children have a know-it-all attitude toward her. He acts as proof their mother’s wisdom, even exclaiming to them how they should listen to her. Look how just 39 seconds with her can change a stranger’s world! His success, then, acts in service of both highlighting Olivia’s goodness and being a lesson to her children.

That Ernesto is reduced to a stand-in for concepts and ideals should raise eyebrows in a film that is predominantly filled with white actors. It gets more damning given the baffling treatment of the other character of color, a black woman listed in the credits as “Professor Douglas.” A friend and colleague of Olivia’s, she watches as Mason grows up, only to lasciviously hit on him at his graduation party. An obvious stand-in for the Mrs. Robinsons whom sometimes usher young men in to sexual adulthood (or at least the fantasy of that), but her shift in behavior comes out of the blue. It’s an awkward moment not just for Mason, but for the audience, too.

There is something telling and troubling about how the film’s perception of race glides so stealthily under people’s radars. It passed that of Linklater and his actors. Furthermore, it went unnoticed—or worse, accepted as authentic—by the professional film reviewers who heralded Boyhood as a highly realized masterpiece.

The acclaim for Boyhood is so torrential that Los Angeles Times critic Kenneth Turan felt the need to post his lone dissenting view on the film with a justification that it was the “most talked-about film of the year.” So it’s important to discuss race, because it is the only thing not being talked about by critics from top outlets like the New York Times and Salon, and the even lone dissenter, Turan.

More than one reviewer noted how impressive it was to capture these “ordinary” Americans: In fact, Salon’s Andrew O’Hehir used the word three times in his review. So what does it mean when “ordinary” in 2014 still passes as the white experience? When the questionable treatment of ethnic minorities as props for the white characters nary raises a flag? Films don’t need to reflect experiences of all people, nor even the average experience. However, it is important that filmmakers be aware of how issues like race, gender, and class can matter. The benignly naive stance of Boyhood informs the luxury of living within a bubble where these issues can be ignored.

In life, as in this film, the unequal treatment of race is rarely blatant. Instead, it is something subtler, a gentle slope—the equivalent of the metaphorical boiling of the frog. It may not even be intentional. But those who face it every day quickly learn to read even the quietest of signals. We know when we exist only as props to make white people feel better about themselves. Or as punchlines to make them laugh. And then we take a step back, into the shadows, as we watch white people reinforce a world that places them front and centre and never question what that means.

Why does race even matter here, naysayers will ask reflexively, and it reminds me of how the Noah screenwriter excused an exclusively white cast by explaining that they could stand-in for all ethnicities. White people are the default: Everyone is expected to see themselves in them, but it is never expected the other way around.

In the film, Mason as a child is sunk by a cropped haircut that leads to giggling in the classroom, but he never has to worry about having classmates pull at the side of their eyes to “become Chinese” or get asked if he is related to Osama Bin Laden. Even bleaker, the little boy never has to be taught to act deferential in front of white people, especially the police.

I sat nervously as a white audience laughed at a Stand Your Ground joke that was funny presumably because the threat was directed at Mason, a white character, and thus trivial. I took the moment to think about the other boyhoods in America.