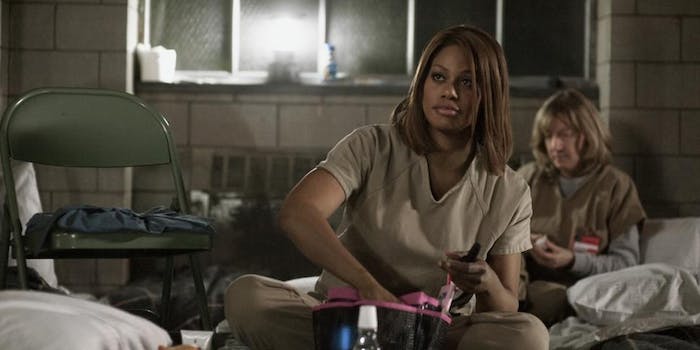 How ‘Orange Is the New Black’ tokenizes transgender people

Where was Laverne Cox in season 2 of Orange Is the New Black?

Laverne Cox is back in the second season of Orange Is the New Black, continuing her trailblazing portrayal of transgender inmate Sophia Burset. But while Cox’s mere presence on the cast of the show is a historic step forward for media representation of transgender people, her character continues to be constrained by storylines that focus almost exclusively on her gender transition.

Last year, television critics were captivated by Cox’s breakout role in the first season of Orange is the New Black. Jennifer L. Pozner on Salon, for example, wrote that “Cox’s Burset has confidence, depth and authenticity unlike anything we’ve seen in the tragic narratives of transgender people [in] corporate media.”

Even critics who critiqued the show’s treatment of race and class still found a place in their hearts for Sophia. Roxane Gay wrote that the show is “diverse in the shallowest, most tokenistic ways” but nonetheless noted that Laverne Cox is “unequivocally outstanding as Sophia Burset” in a storyline that is “genuinely unlike anything else on television.” And while The Feminist Griote calls out the stereotypical portrayals of people of color in the show’s first season, she still believes that “Sophia is the only character who isn’t trapped by stereotypes.”

It’s certainly breathtaking to see a transgender woman of color in a major television program. But despite the enthusiasm for Cox’s inclusion, the portrayal of Sophia in season one of Orange Is the New Black has its fair share of problems. Sophia’s entire storyline revolves around her gender identity: her attempts to increase her hormone dosage, her complicated relationship with her family, and her campaign for improved prison healthcare. Sophia’s sparse friendship with Sister Ingalls serves only to help Sophia understand how to manage the strain put on her marriage by her transition.

While Sophia’s transition storyline is indeed “unlike anything else on television,” the fact that it is her only storyline reduces Sophia to her transness. This reductionist approach to Sophia’s character mirrors the approach of early queer TV shows (such as Queer as Folk and The L Word in the 2000s) that focused on their characters’ queerness to the exclusion of a more in-depth exploration of their personal lives.

Orange Is the New Black has learned its lesson from early queer TV and fleshed out some of its queer female characters, giving them plots to participate in that do not directly involve their sexual orientation. If Poussey’s entire storyline revolved around her managing the stigma of her lesbianism or Nichols’ entire storyline revolved around her sleeping with female inmates, the show would be critiqued for reducing queer characters to their sexual orientation.

But because a transgender character in 2014 is new and exciting, critics give Orange Is the New Black a free pass despite the fact that it never allows Sophia to do anything other than simply be trans. Laverne Cox’s mere presence is captivating and her political work outside of the show is the most vital force in contemporary queer activism in the United States, but this doesn’t distract from the fact that she’s given a television character that serves largely as a basic vehicle for information about gender transition.

More unsettling still is the fact that almost every Sophia scene in season one of Orange Is the New Black involves another character referring to her with an anti-trans slur, whether it’s Pennsatucky calling her an “it” or Taystee calling her a “man” with a “plastic pussy.” While some might claim that this is a realistic representation of transphobia in a prison setting, Sophia’s character is never given the agency to respond to these slurs or confront anyone who misgenders her.

Season one’s Sophia, then, seems to be present in a scene for one of two reasons: to show the viewer the basic experiences of a transgender woman or to be pilloried by the other prisoners with no opportunity for rebuttal. Sophia is either a prop or a punching bag, never a vital participant in prison culture.

The just-released second season of Orange Is the New Black only takes marginal steps toward fleshing out Sophia’s character. But her primary storylines still revolve safely and securely around her transness. Other queer women on the show get up to all sorts of trouble: Nichols, Poussey, Warren, and Big Boo get caught up in the fight between Red and Vee. But Sophia is still left standing awkwardly on the sidelines, a brilliant actress stranded like an island in the middle of an amazing ensemble cast of characters that, apart from her, all cross paths in meaningful ways.

In one episode in season two, Sophia instructs the other inmates about the vagina because she “designed one herself.” Apart from this brief storyline (which goes out of its way to call attention to Sophia’s surgery), Sophia spends time trying to recapture her relationship with her estranged son who, as we learned in season one, has turned her into the authorities for fraud surrounding the funding of her transition. Once again, Sophia’s storylines all revolve around the fact that she’s transgender.

Sophia can’t even casually interact with other inmates without constantly being forced to remind the viewer of her transness. In one scene, Sophia playfully asks Red, “You caught the whole ‘used to be a man’ thing, right?” when Red laments her own self-consciousness about her image. And, in another, Sophia thanks Red for doing her a favor by asking, “You ever been kissed by a six-foot-tall black transgender woman?” The writers never let the audience forget that Sophia is transgender; she has to pop in and issue a reminder in every scene. They trust us to remember that Poussey, Nichols, and Big Boo are gay, but Sophia must announce her transness wherever she goes.

Truly revolutionary queer television would grant Sophia a more meaningful place in the ensemble cast of Orange Is the New Black. It would give Laverne Cox the opportunity to portray a person rather than a token. Imagine Sophia becoming romantically involved with another inmate, developing friendships, and finding a new life among women in the prison. Imagine Sophia being part of the show’s central drama instead of being an awkward bystander who only gets clued in when she cuts people’s hair. Orange Is the New Black will undoubtedly be back for a third season.

It’s time to give Laverne Cox a more interesting character to play, a character as deep as she is groundbreaking.

Photo via Orange Is the New Black/Netflix