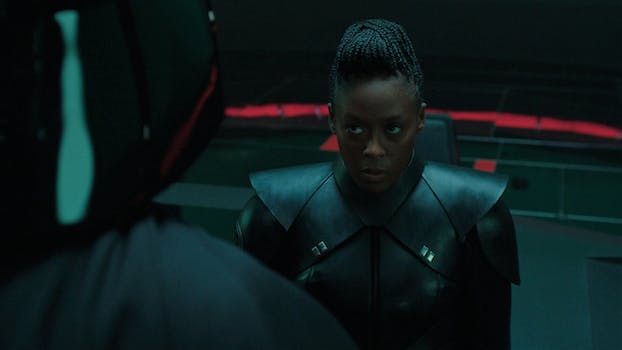 Anakin Skywalker looms large in this strategic standoff between Reva, Vader, and Obi-Wan.

Reva Sevander‘s backstory comes to a head this week, confirming a neat little piece of foreshadowing from episode 1: Reva was a Jedi trainee who witnessed Anakin’s massacre at the Coruscant Temple. Since then she’s been hell-bent on revenge, climbing the Inquisitorial ranks to get closer to Darth Vader. This culminates in an unexpected alliance with Obi-Wan in episode 5, as he and Reva use each other to outwit Vader in different ways. In theory, anyway.

With Leia and Obi-Wan under siege with a group of refugees, this episode plays out like a long-distance duel between Vader and Obi-Wan. Inside a locked bunker, Obi-Wan must buy enough time for the refugees to escape. Vader has already infiltrated their hiding place using Leia’s droid to jam the doors and is waiting in his spaceship for Reva’s troops to break in.

Interspersed with all this, we see flashbacks to the early Clone Wars era, as Anakin and Obi-Wan duke it out in a practice duel. Obi-Wan is attempting to teach his padawan a lesson that never really sticks: There are more ways to “win” than just straightforwardly defeating your opponent in combat. In the present day, this pans out in the form of two tricks. Obi-Wan uses a decoy ship to get the refugees off-planet, and he uses Reva to keep Vader distracted. Allowing himself to be arrested by the Inquisitors, he gives Reva the ultimate chance to win Vader’s trust—and get close enough to kill him.

Considering Disney’s love of nostalgic fanservice, I’m surprised that Hayden Christensen hasn’t had more screentime. If anything, the show includes too much Darth Vader and not enough Anakin. Best used sparingly, Vader is meant to be scary and imposing—a difficult goal if his main role is “Reva’s demanding boss.” By comparison, there’s a real hunger among Star Wars fans for Christensen to get his due. People think he was done dirty by the Prequels, and want to see him and Ewan McGregor face off against each other. This week’s flashbacks gave us a taste, but the show should really be giving us more.

We do see, however, that Vader has become a better strategist since his padawan days. It turns out that he knew about Reva’s secret motives all along, setting her up for an easy defeat. Obviously, Obi-Wan didn’t know this, but he still used her as cannon-fodder. There’s no way he thought Reva had a chance of winning that fight. Vader ends up stabbing her in the gut, although in the grand Star Wars tradition, she survives to fight another day.

Reva’s betrayal of Vader is the kind of twist that works whether you predicted it or not, highlighting the absurdity of the anti-Reva backlash. After the first two episodes, there were a lot of un-generous complaints that Reva “didn’t make sense” because she seemingly killed the Grand Inquisitor (a character who is canonically alive later on), and inexplicably knows Darth Vader’s real name. These apparent plot holes were easy fodder for people who hated Reva out of poorly-disguised racism—ignoring the fact that Obi-Wan Kenobi is a serialized TV drama, and this kind of mystery would surely be explained in later episodes. Which has indeed just happened.

With a revenge quest echoing the samurai movies and Westerns that inspired the original Star Wars, Reva is the kind of character who will thrive in the expanded spinoff canon. The only problem is that her defining trait is a dead-end. She can never defeat Darth Vader. With a good writer, this could be a compelling tragedy. But Obi Wan-Kenobi is not very well-written.