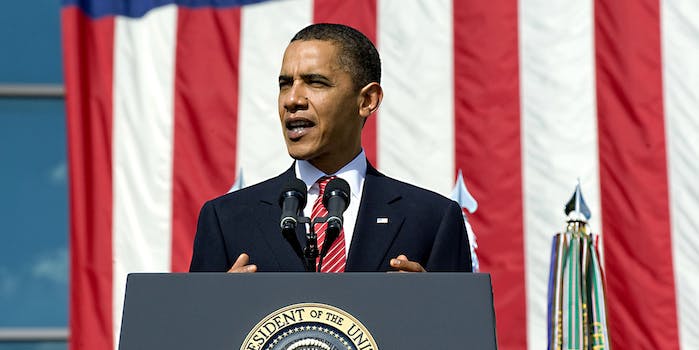 Media doesn't work the way it used to.

President Obama’s immigration speech, in which he announced a number of major changes to the U.S. immigration system, happened last night. You may have missed it, as nearly every major network in the United States declined to run it. Or you may not have, since the president wisely took advantage of the Internet and Whitehouse.gov as a tool to run the speech, reach out to Americans, and slap the major networks in the face for their snub.

When the leader of the free world can’t get a television spot, it’s a problem—one reminiscent of the time where there was considerable debate over a potential conflict between the State of the Union and a critical Lost episode. Fans of the show avidly insisted that the show must go on, even if the commander in chief was issuing one of the most important speeches of the presidential year.

Rumors swirled around what the president would be planning for the speech, given his threats of executive action over immigration in the wake of Congressional foot-dragging on addressing the subject. He, like many Americans, believes that the United States has a serious policy problem on immigration, and after giving elected officials time to fix it, he took matters into his own hands:

[O]ur immigration system is broken, and everybody knows it.

Families who enter our country the right way and play by the rules watch others flout the rules. Business owners who offer their workers good wages and benefits see the competition exploit undocumented immigrants by paying them far less. All of us take offense to anyone who reaps the rewards of living in America without taking on the responsibilities of living in America. And undocumented immigrants who desperately want to embrace those responsibilities see little option but to remain in the shadows, or risk their families being torn apart.

It’s been this way for decades. And for decades, we haven’t done much about it.

But what’s troubling about the speech is the fact that no major network seemed to want to air it, although Univision and Telemundo, two major Latino networks, both planned to interrupt their programming for the president’s address to the nation. PBS also picked it up, reflecting its obligation as the Public Broadcasting Service, and NPR aired the speech, too (guess all that government funding is good for something). CNN, with a vested interest in political coverage, promised to run the speech as well.

ABC (hey, if you like politics, you’ll love Scandal!), NBC, CBS, and Fox all refused to run the speech, instead going with their usual programming—though in the West Coast, where time zone differentials often shake out badly (at least for fans who like to avoid spoilers). CBS announced that it would air the speech live at 5pm, reflecting the 8pm start time on the East Coast. But for East Coasters, evidently fall sweeps are more important than what may be one of the most important political developments of Obama’s presidency, ranked on par with comprehensive healthcare reform.

Something deeper than sweeps is going on here. It seems peculiar, to say the least, that networks popular among the Latino audience would be dedicating airtime to the speech even interrupting the Latin Grammys to do so, while networks focusing on white American audiences would not be. While critics of racialized discussions about the Obama administration are often accused of playing the race card, this is definitely a case in which the race card must at least be pulled out and examined.

Many white Americans don’t have a direct interest in immigration reform—or if they do, it’s reform that will make immigration more restrictive—and thus, didn’t think they had a reason to tune in to the speech. The logic seems to be that immigration issues happen to someone else on a border far away and are primarily an abstract problem. Issues like amnesty for undocumented immigrants or abuse of migrant workers are not concrete, and don’t have real consequences.

U.S. networks aimed at such viewers may have assumed that people wouldn’t be interested—or may have wanted to avoid outrage from those who believe that the borders of the U.S. are too porous, and who oppose amnesty. For anti-immigrant white viewers with thoughts about immigration that are bound up in xenophobia and racism, watching a black man tell them that their country needed to be more welcoming to immigrants might have been simply too much to bear.

The White House was less than pleased about the action from the networks and saw it as a deliberate dismissal of the president’s importance to the nation. An unnamed source inside the White House told Politico:

In 2006, [President George W.] Bush gave a 17-minute speech that was televised by all three networks that was about deploying 6,000 National Guard troops to the border. Obama is making a 10-minute speech that will have a vastly greater impact on the issue. And none of the networks are doing it. We can’t believe they were aggrieved that we announced this on Facebook.

The Facebook comment was a reference to the fact that the president announced the speech on Facebook before pursuing traditional media contact methods to get in touch with the press at large. It’s telling evidence of the president’s desire to stay intimately connected to Internet culture and to keep up steady contact with voters who interact with him primarily online, and not through other means. For Obama, the first Internet President, it made perfect sense to turn to Facebook, just as he’s used other online media for announcing policy statements and making commentaries, right down to opening himself up for public questions on Reddit.

But it’s not as though he didn’t try to go the traditional route first. Again, our mysterious Senior White House Official:

[W]ith plans underway for a Thursday night address on Obama’s plans to issue executive actions on some of the most sweeping immigration reform in decades, those feelers came back with a negative report. None of the major networks wanted to take time away from their prime-time programming for Obama’s 8 pm speech. So the administration did not send out a formal request to the networks and took to Facebook to publicize the speech with a special video message from Obama along with a link to the livestream.

While the White House and the networks are telling two different stories, with networks claiming that they were shut out by the White House decision to publicize on social media and the White House arguing that it was forced to when the networks refused to air the speech, the divide is more than just a political spat, and it’s not just a racial one, either. It’s also a fascinating digital one.

Using every tool at hand, the White House quickly spread news about the speech, allowing it to spread rapidly across the U.S. in a way that wouldn’t have been possible a decade ago—the Obama mobilization team went into high gear, as it did throughout his prior campaigns, as well. Any American with access to a computer and broadband Internet could watch, if she felt so inclined.

The Obama team have distinguished themselves when it comes to connecting digitally, as this case illustrated. As with other aspects of the president’s digital strategy, this certainly reflects the new face of the presidency in America, one that requires a much more intimate and immediate connection with voters. A president who can’t work the rope line of the Internetthe fiber, if you will—is doomed to failure, no matter what kinds of policy proposals he or she makes. In this instance, the networks refused to cooperate, the administration took to broadband, and many of the networks also grudgingly promised to run the speech on their digital platforms for viewers who preferred policy to Bones.

Ironically, by refusing to air the speech, the networks ended up giving the speech more attention as media (online, of course) picked it up. The major networks no longer operate in a world where they have a stranglehold on the White House and its connections with the press, and they learned that that hard way last night.