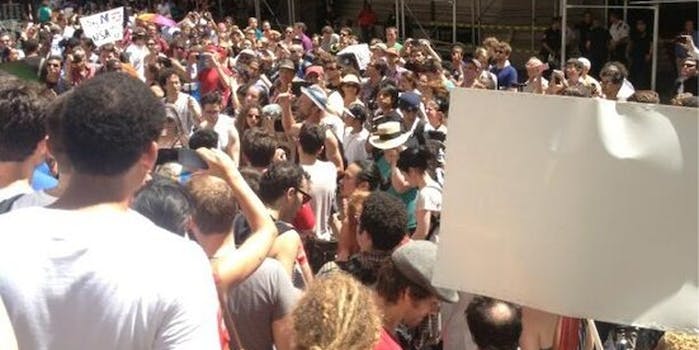 Hundreds took to the streets on July 4 to protest NSA surveillance.

The rally is part of a national movement called Restore the Fourth, which today launched more than 100 protests across the United States. The demonstrations are aimed at calling attention to what the group believes is an erosion of the Fourth Amendment by the NSA’s domestic surveillance activities.

The movement attracted everyone from socialists to veterans, many of whom toted signs like “Impeach Obama” and “I guess perjury isn’t a big deal to anyone anymore.” The latter is a reference to James Clapper, the Director of National Intelligence who admitted giving false testimony to congress about the NSA’s domestic spying. 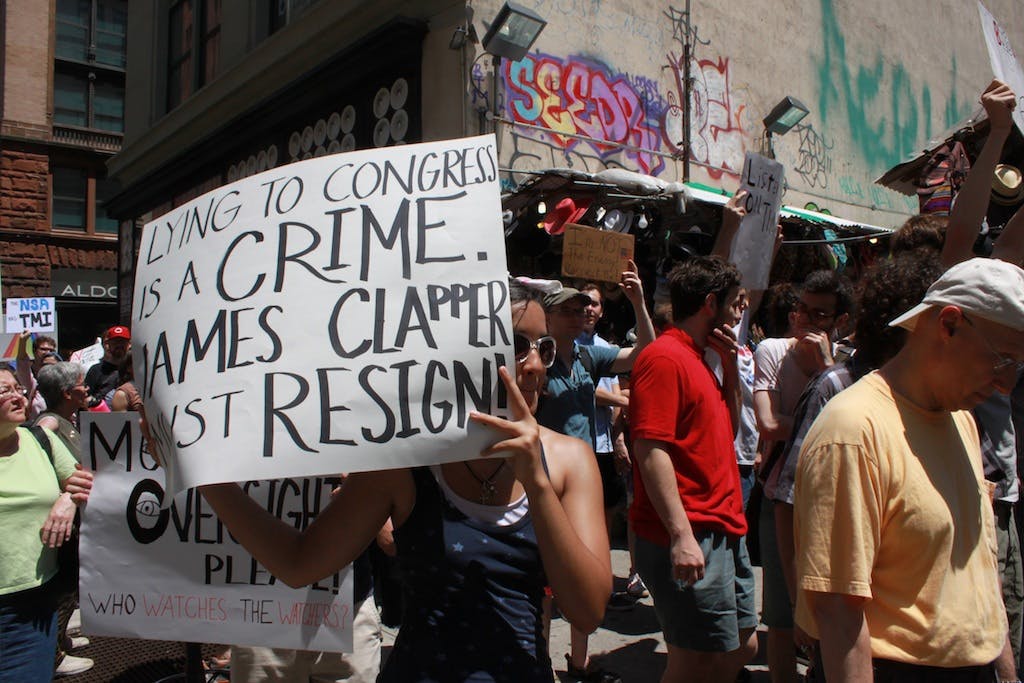 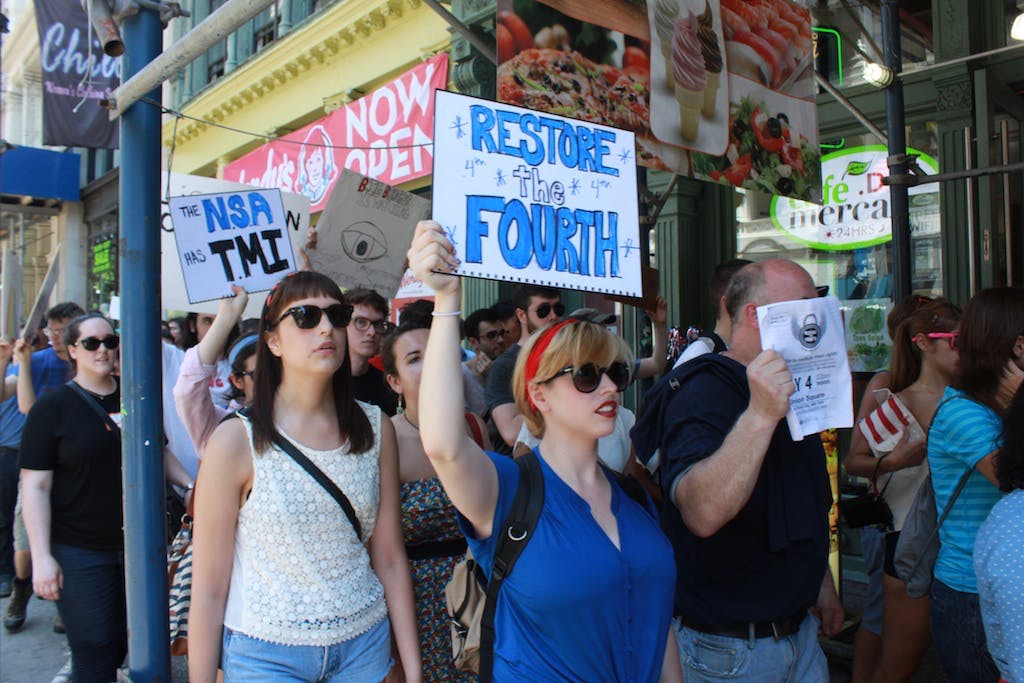 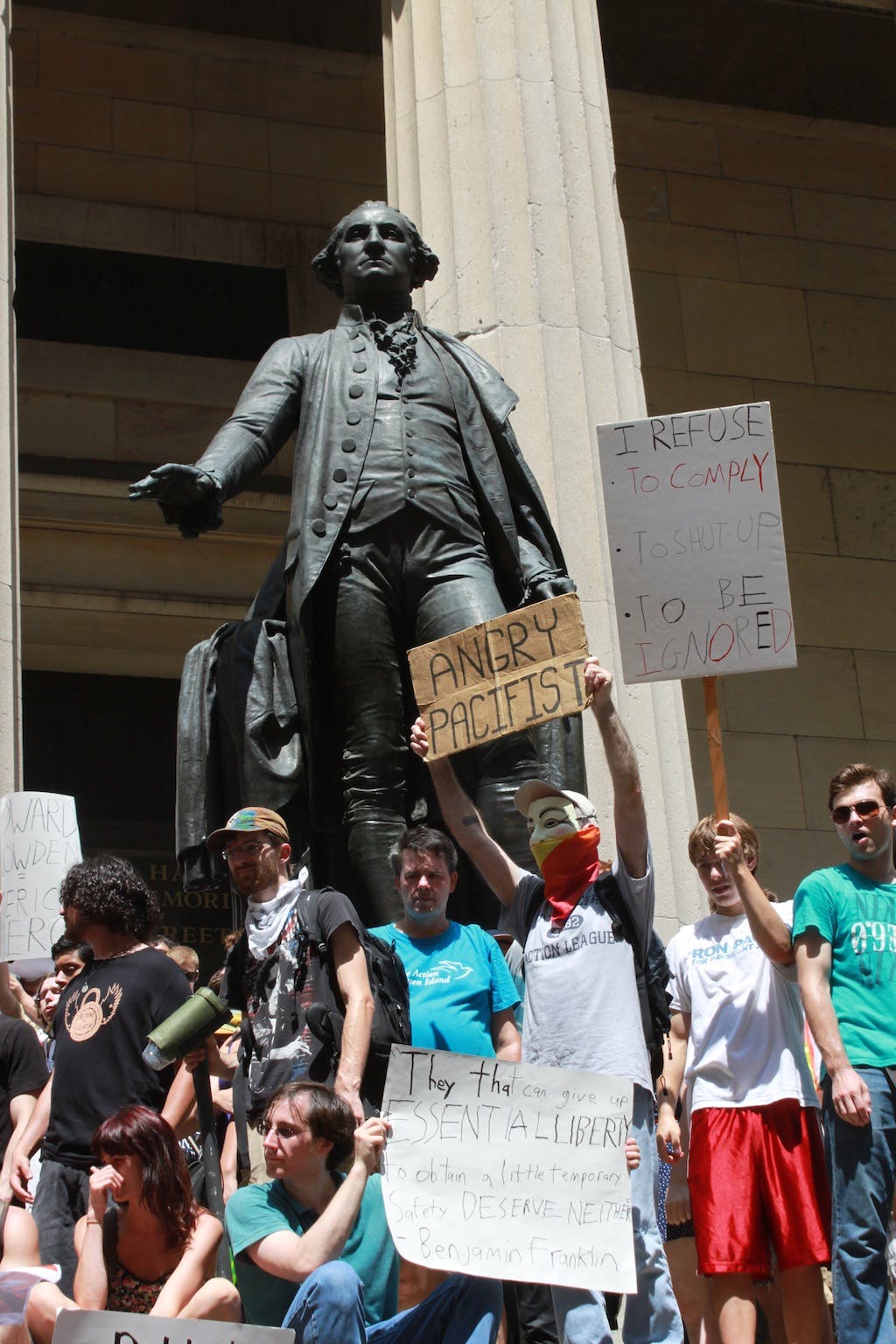 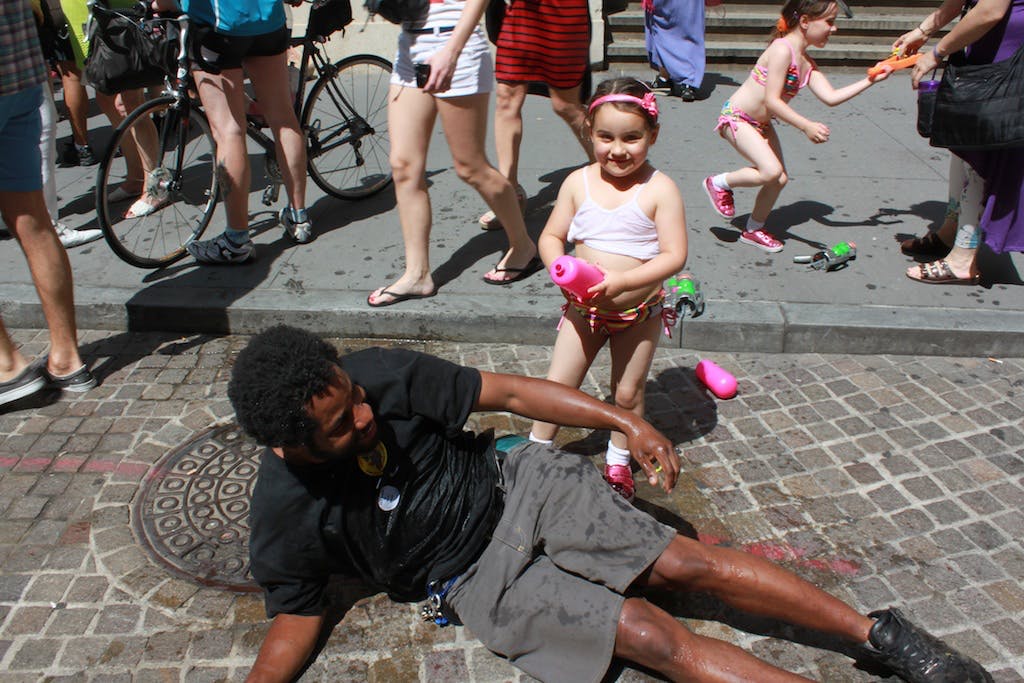 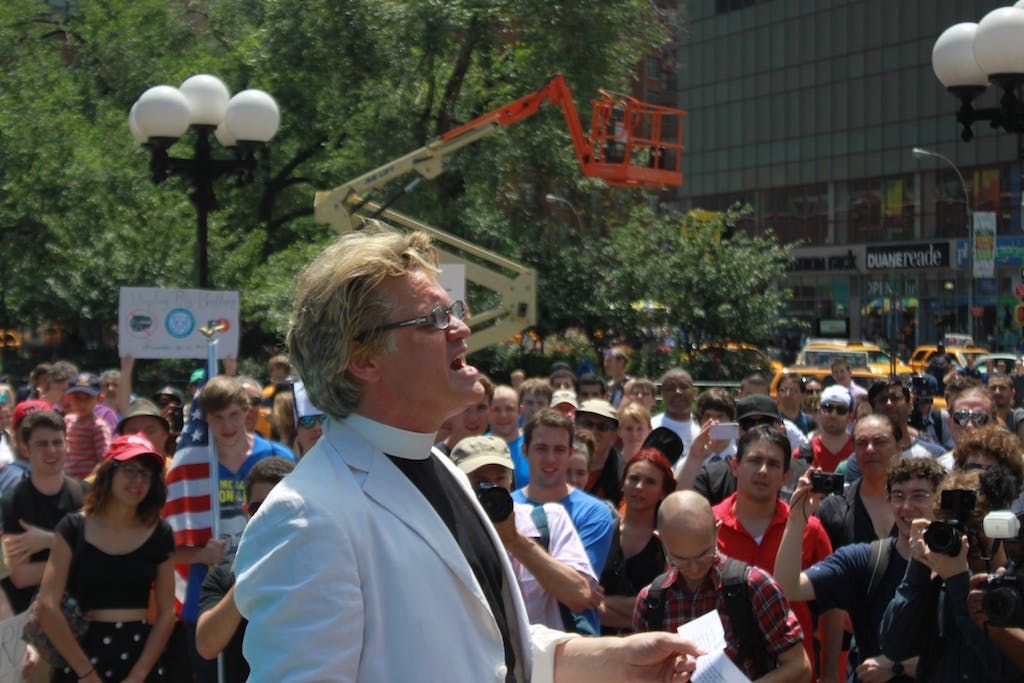 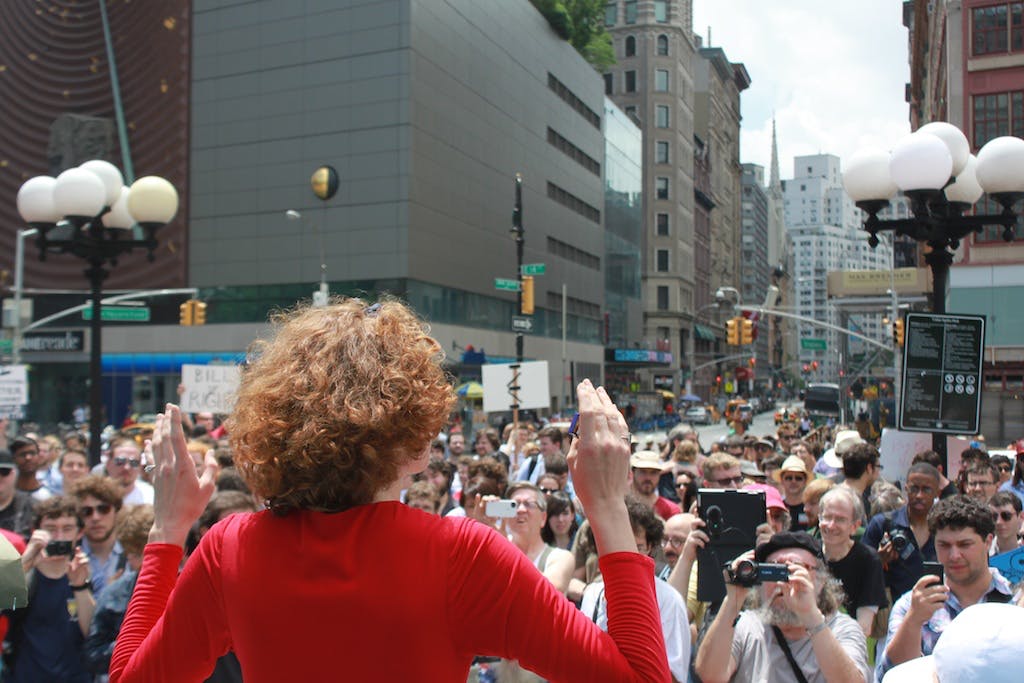 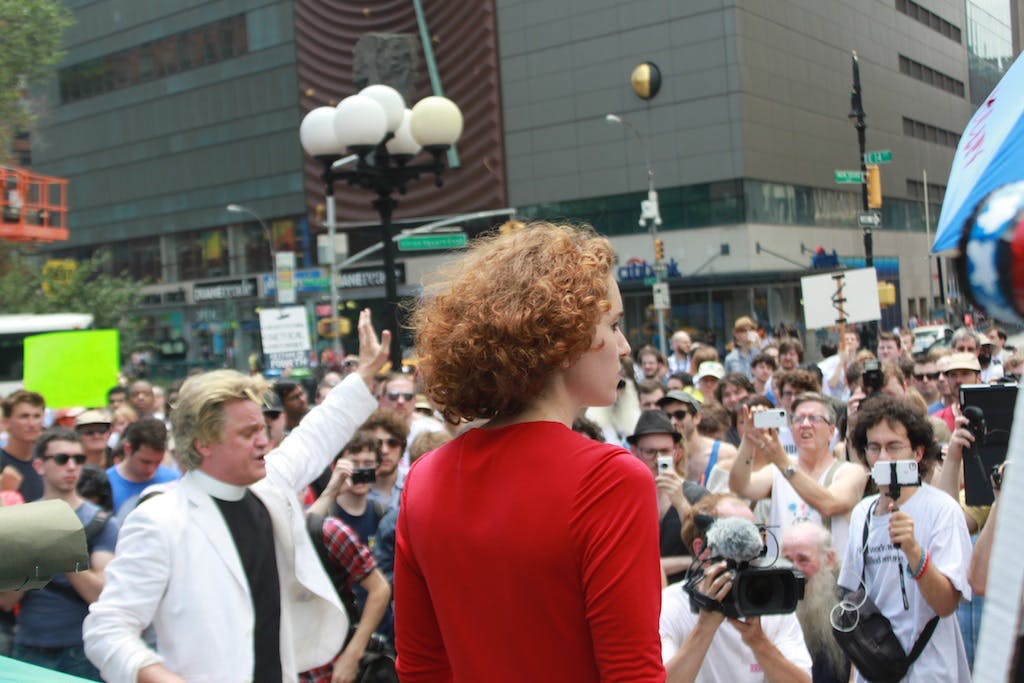 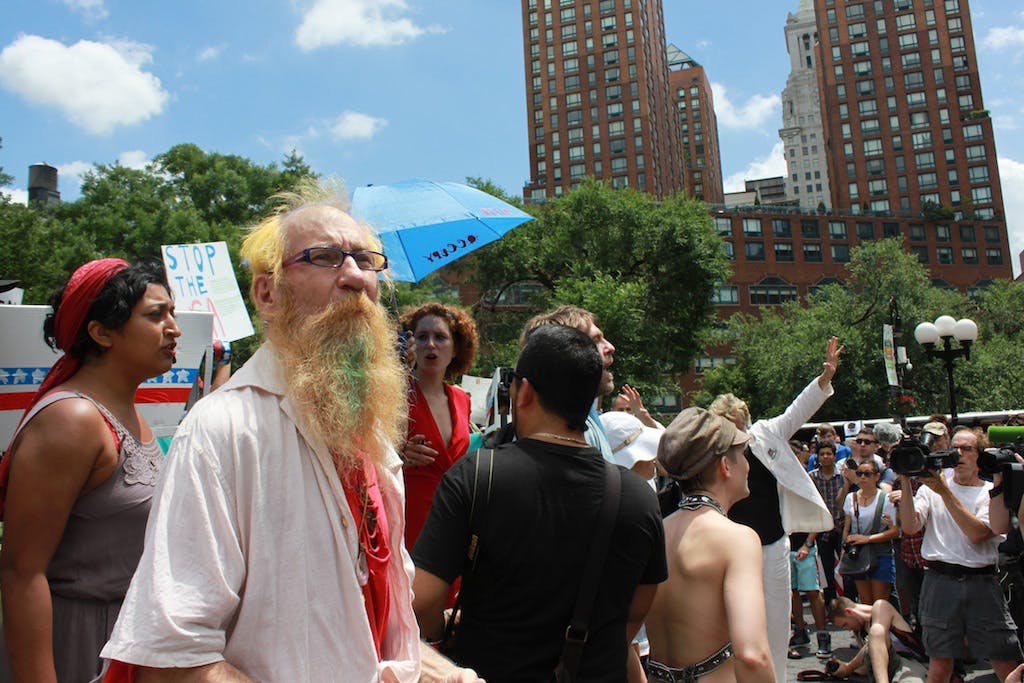 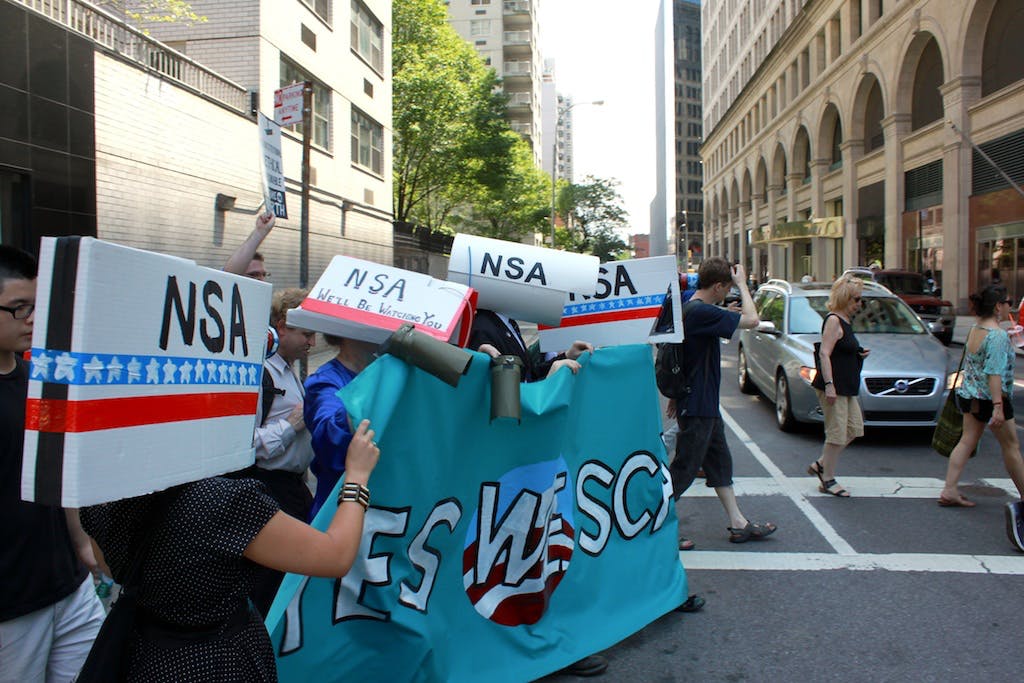 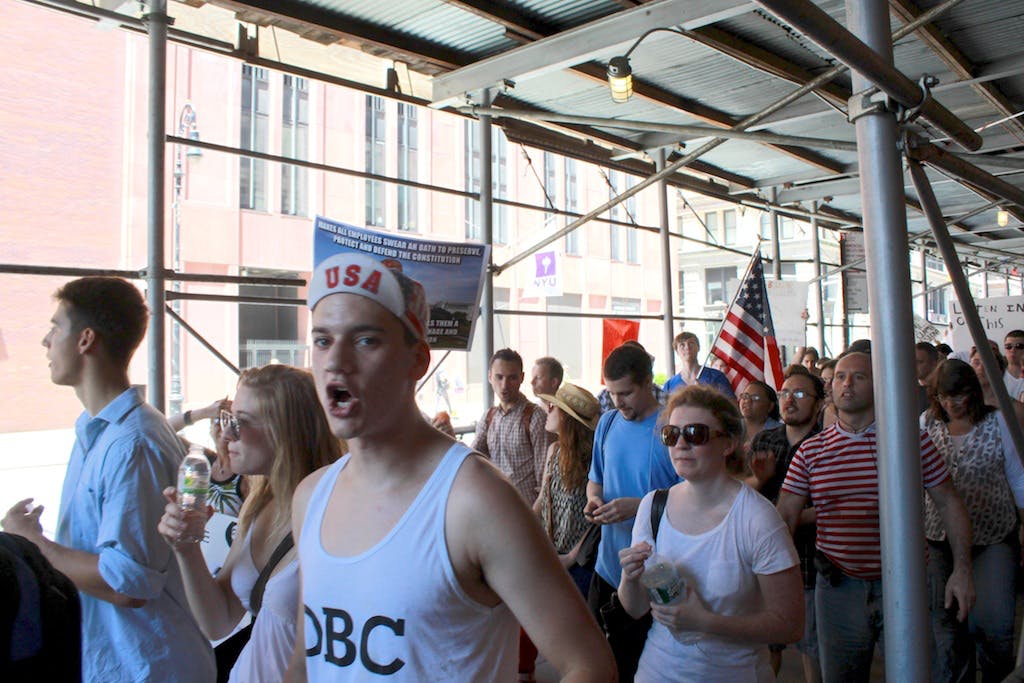 Still, the movement has yet to garner the widespread appeal of Occupy Wall Street. “This is still just the middle class,” protester Sandy English, 50, told the Daily Dot. English is an organizer for the Socialist Equality Party, which he explained was using social media in an attempt to get the working class to come out. “In the past few years there has been an explosion on Facebook of the working class,” he said.

As crowds gathered, Reverend Billy of the Stop Shopping Gospel Choir activist group—which equates the devil with “corporate commercialism”—spoke on local privacy issues like the New York Police Department’s controversial “Stop and Frisk” program. The program essentially gives police the authority to frisk anyone they suspect of a crime and has increased the number of searches more than three-fold in the last decade.

Around 12:40 the protesters began marching towards the federal courthouse chanting, “Hey, hey, ho, ho, the NSA has got to go.” 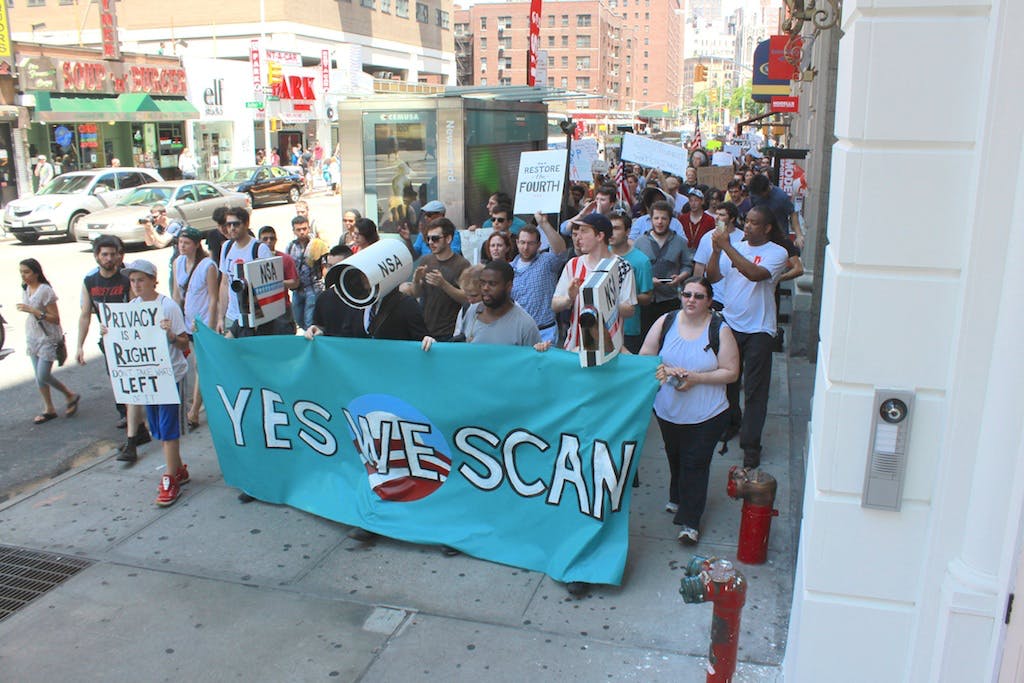 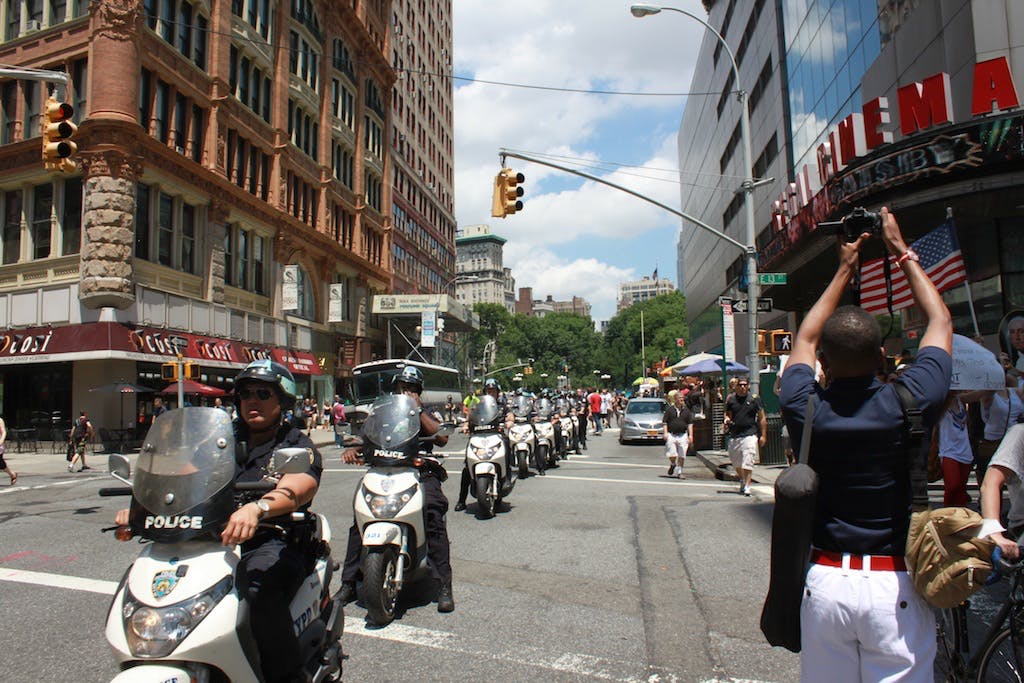 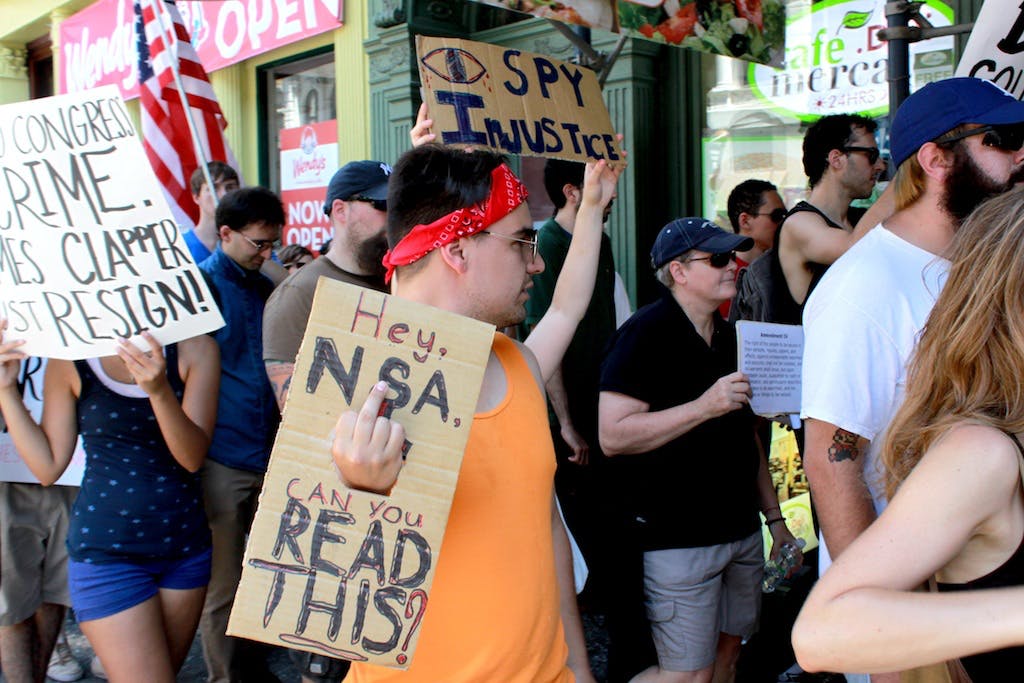 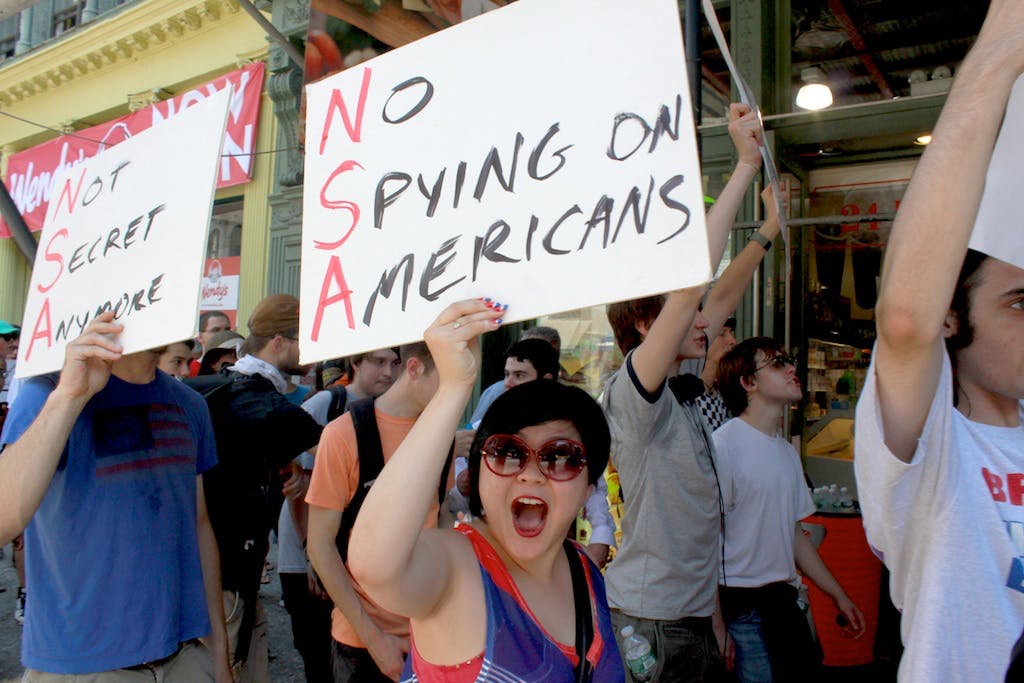 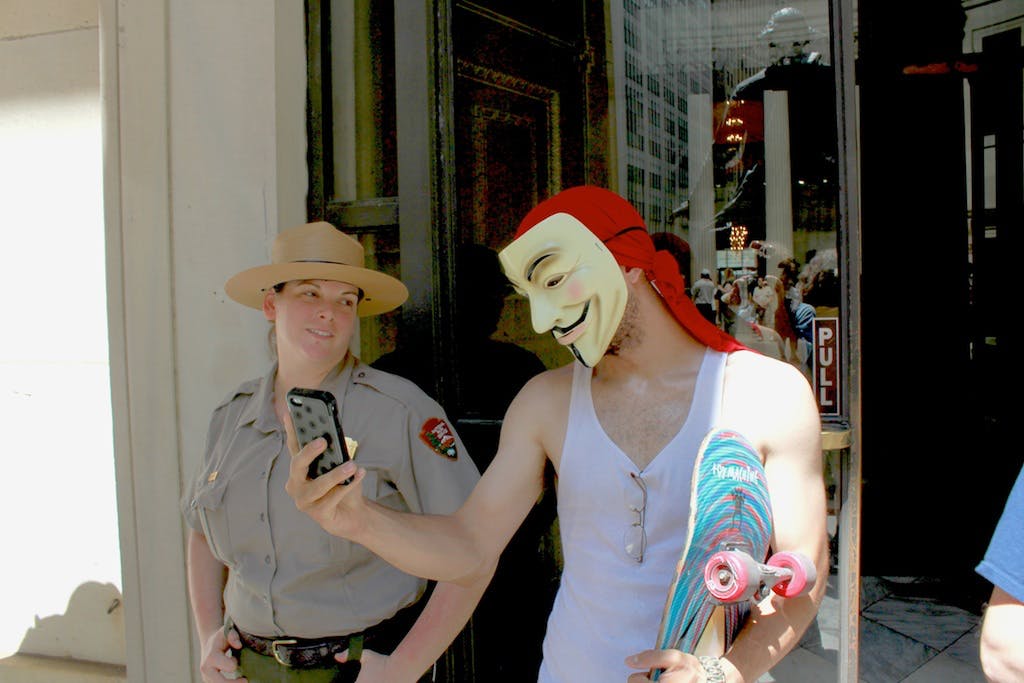 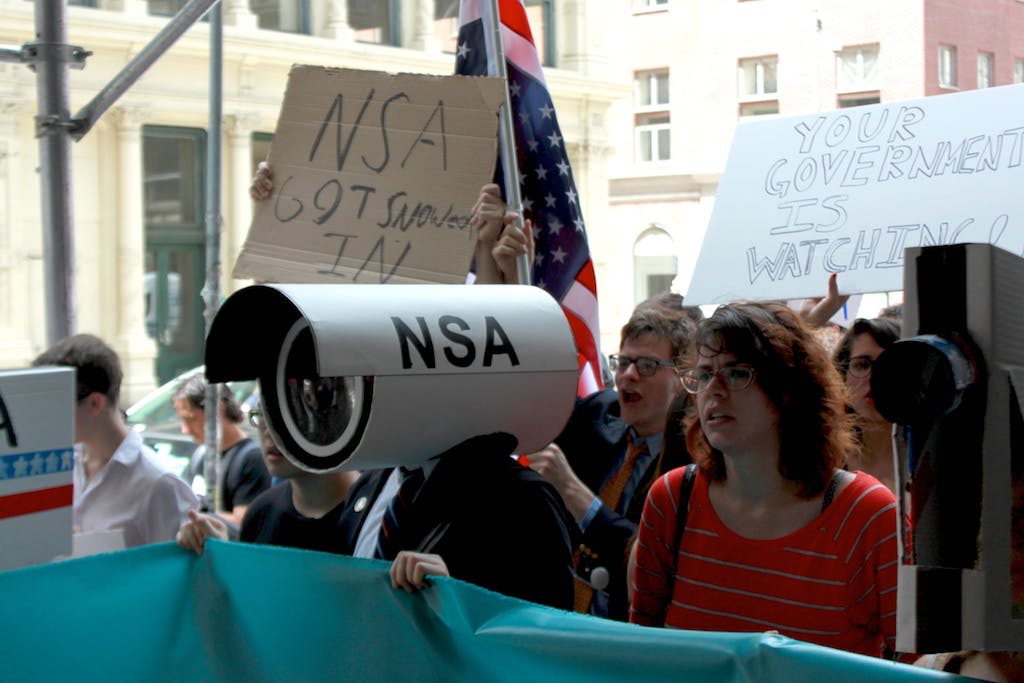 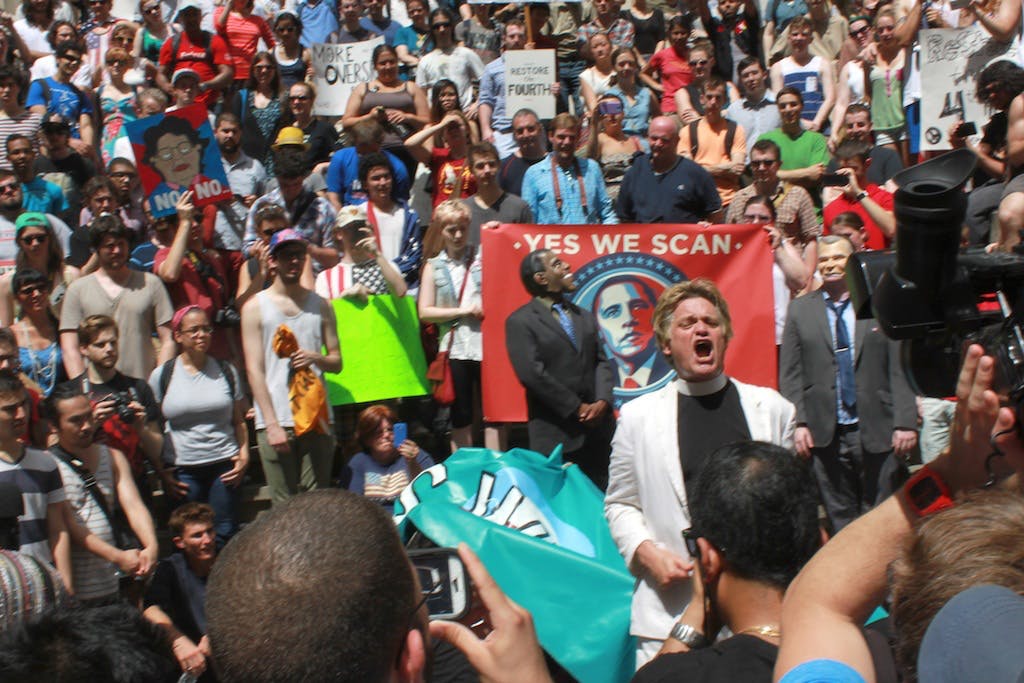 “There was a time after 9/11 when there were no young people at these protests,” Donald, of Reverend Billy’s choir, said. “People are finally getting their balls back.” According to Donald, who has been an active protester in New York since 1965 and who participated in the Stonewall riots, the young make-up of the crowd was reminiscent of the Vietnam protests. Drawing a parallel between the draft and Internet rights, he observed that young people only protest when something personally affects them.

One protester, Randi Ryan, 60, said she came out on the 90-degree day not because she personally cared about her online privacy but because she believed the NSA, through programs like PRISM, which surveil American’s photos, emails, chats, and other online content, violate the Fourth Amendment: “I didn’t know you could do that. That’s our Bill or Rights,” she said. “Mind your own business.”

Around 2:30, the police-lined protest reached the federal courthouse and recited the Fourth Amendment. The organizers, who utilized the “people’s mic” of the Occupy Wall Street movement, explained that they wanted the protest to be peaceful and to disperse before there was any trouble. “This is not the end,” said Ben Doernberg, explaining that there would be another protest on August 4. Doernberg told everyone to email Restore the Fourth NYC to stay informed. “We know it’s ironic, but it’s a good way to keep in touch.”

After a speech by Reverend Billy and a chants of “Bush, Obama, same old drama” and “Snowden is a hero,” everyone disbanded.