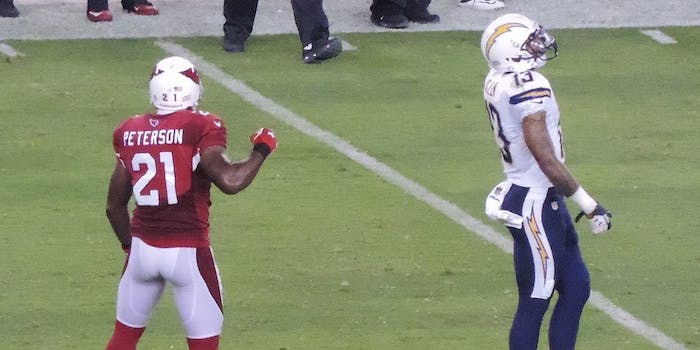 For this Arizona Cardinal, Super Bowl week was the perfect occasion to attempt record.

His peers in the NFL may not agree whether Arizona Cardinals defensive back Patrick Peterson is a shutdown corner, but no one can question his new record.

Just a few miles from the host stadium for Super Bowl XLIX, Peterson visited Deer Valley High School where he helped set the new Guinness World Record for most selfies taken in one hour. A new record of 1,449 selfies eclipsed the previous total of 657.

WE JUST BROKE A WORLD RECORD! @RealPeterson21 now owns the @GWR for most selfies taken in 1 hour with 1,449! #SBonNBC pic.twitter.com/Ispyc4s4o9

The former LSU-star and four-time Pro Bowler posed with each student for no more than two seconds, and, as the rules stated, each snap was taken with a different student. Peterson’s face, arm, and neck had to appear in each picture which had to be taken with a smartphone or tablet camera.

On a related note, the debate over Peterson’s standing among the NFL’s elite cornerbacks was brought up by none other than the Seattle Seahawks’s very own shutdown corner, Richard Sherman. Sherman was quoted as saying that the Cardinals star might not even start for his team. Apparently, all is forgiven as the two players hugged it out during the Jan. 25 Pro Bowl in Glendale, Ariz.

[email protected] on @RSherman_25: "We both have respect for one another." https://t.co/jTsV78Emoh pic.twitter.com/uFEMqV2BNe