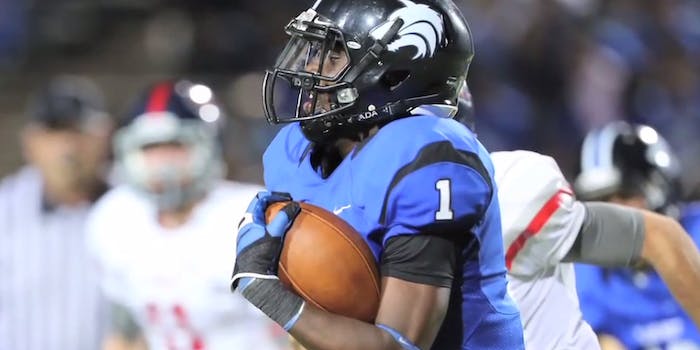 For a hefty chunk of the morning, I’ve been trying to discern the coded language said to be hidden in this tweet.

ATX think they ready for The Kraken?

That’s 6’2” defensive back, future University of Texas star, and Rockwall-Heath High School senior DeShon Elliott. The Heath, Texas, prospect was joined Wednesday morning on National Signing Day by a massive assembly of his classmates. In front of the school, and in front of the national college football echo chamber, Elliott clarified his short-term academic future.

This pageantry is traditional, but in recent years the ascent of social media—particularly Twitter—has added youthful transparency to the entire recruiting process. Hundreds of kids are still faxing in their letters of commitment today, but that’s largely a ceremonial gesture now. For coaches and fans, recruiting now means following bushels of teenagers on social media, sending them messages of questionable virtue, and trying to dissect intentions based on the whims of coddled kids.

Understandably, many sports reporters have soured on the idea of playing gossip games with teens. My friend Blake Hurtik covered recruiting for the San Antonio Express-News for three years before writing a resigned manifesto:

…a huge part of my job became maintaining and monitoring the high school sports Twitter universe of San Antonio, since that’s where actual news involving kids happens now. Star recruits announce (or recant) their college plans there, kids spread rumors that the QB at the rival school is ineligible, cheerleaders post photos from a Halloween kegger that got busted and resulted in multiple arrests, MIPs, suspensions, and a police report perfectly accessible by reporters.

Over those three short years, I saw Twitter grow into a monster and we abided.

He went on to publicly denounce the bubble: “I don’t want to be part of the problem. College football and our unbridled addiction to it are breeding a disturbing climate that the young men who we love to cheer for now reside in.”

He’s mostly right. Except that I’m unabashedly pro these antics. Following students on Twitter is like reading tea leaves, looking for hints at where they might commit. I’m also in favor of paywall sites like Horns Digest, where over 3,500 ravenous Longhorns fans are presently chatting in hypothetical pipe dreams that are at least seven months away.

Thing is, recruiting has always been a dirty, fan-driven business where coaches have to color outside the lines to land prize-fighting talent. Coaches used to run their local media, and if a prospect didn’t play nice, his reputation could easily be discredited. Now control of the media narrative has been flipped.

While their tweets may be at times exuberant and immature, these students now have a voice—one that encourages a network of solidarity across state lines.

Baltimore-area quarterback Kai Locksley recently switched commitments from Florida State to Texas. Immediately after, Locksley began a Twitter campaign to rally the troops and recruit his football buddies. This reportedly included a longrunning group text between some of the nation’s most talented kids. It worked, to an extent—Locksley’s 11th hour flip to Texas was allegedly instrumental in convincing UCLA wide receiver pledge Ryan Newsome to switch allegiances Wednesday morning. You can guess where the news broke.

Coaches have to play the game and that boils down to maintaining a Twitter presence, and making an attempt to connect on a cultural level with recruits. No one is better at this than Texas A&M head man, Kevin Sumlin. For a school that prides itself on its military-minded, rural approach to tradition, Sumlin is a shockingly progressive contrast. He’ll attend Drake concerts, fly a helicopter to high school games, and tweet one-note high fives.

Oklahoma State’s Mike Gundy—no stranger to viral moments—hates this. In a Wednesday Signing Day presser, Gundy blamed all of these late flips to fan interaction on Twitter:

We went through a time in my first four or five years here where (flips were) really common. The last three or four years, you didn’t see it as much. This year, people are back to flipping. There were a lot of guys changing their minds and changing schools. I think the reason for that is because of the internet. The information that’s out there, instant messaging, Twitter, direct messaging and all that. There’s so much out there now.

I think the fans play a role in that, because they can contact the recruits. I think they’re a huge impact in recruiting now, whether we as coaches (believe that or not). These fans who are contacting these players can affect the way they think. You never know why kids do what they do, but I’m convinced, in some of the ones we were involved in this year, they were affected be people who contacted them on their Twitter account.

It’s definitely a circus, but it’s also created a more informed fan culture—one that humanizes and celebrates the talent. That’s preferable to nameless uniforms and hiding behind the university shield. Forget about whether teamwork values are a better path toward collegiate wins, and consider that these players have professional dreams and some will be commercial properties for seven years before they’re allowed to financially profit from their likeness.

To that end I have no problem with UCLA commit and the state of Texas’s No. 1 running back prospect Soso Jamabo trolling local news by offering the exclusive fake scoop that he’d be playing football at ITT Tech.

You heard it here first..https://t.co/YW3zyTeqej

Recruiting naysayers also like to point out that this nationwide trend is inherently a fool’s errand. The common analogy tossed around fan forums is that Signing Day is akin to receiving a bunch of Christmas presents that you can’t open for two and a half years, and half of them will break anyway.

But recruiting, and specifically the arbitrary star system sold by sites like Rivals and ESPNU, matters. According to Yahoo Sports Radio’s Geoff Ketchum, 50 percent of five-star high schoolers will go on to be NFL draft picks, and the same goes for 20 percent of four-star kids. Packing a room with talent speaks volumes, and it’s why grown men in Waco, Texas, erected a fake “coming soon” billboard that features restaurant franchises that have no plans to set up shop, all to lure kids to play ball at Baylor.

It’s why Ketchum got into a nasty Twitter brawl with reporter Billy Liucci over conflicting loyalties and scoops. Both run fan sites, but Ketchum accused Liucci of operating as a mouthpiece for his university and drinking with players. Whether or not that’s true almost doesn’t matter: These scoop-hungry reporters are fully integrated into high school and college culture, making a living by texting teenagers and their girlfriends.

If nothing else, Signing Day is about prideful fun. In addition to Jamabo, UCLA bolstered its star power  by inking Cordell Broadus, who is now paired with defensive back Justin Combs. In other words, UCLA football now features the sons of Snoop Dogg and Diddy.

Hey, it beats pretending that this whole charade is about education.
Screengrab via Max Preps/YouTube