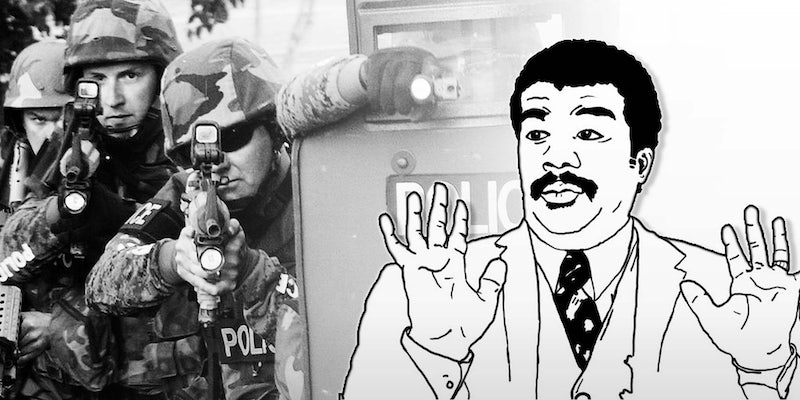 Sending the SWAT team to your neighbor's home? What could possibly go wrong?

There’s a lot of pressure involved with being an Internet badass, and not everyone can take the heat. Such is the case of 22-year-old Michael Adams Jr. who, during his time as a computer hacker, had failed to become the target of a “swatting.” Taking matters into his own hands, Adams simply called the police himself, who responded to a made-up hostage situation at his neighbor’s Marple, Penn., home this past September.

Swatting is well-known and particularly dangerous prank that involves convincing a heavily armed, high-risk police unit, such as SWAT, to perform a raid on someone’s residence. In order to cause enough alarm to warrant more than just a knock from a uniformed officer, the prankster usually claims the situation involves an armed dispute or bomb threat.

Sending militarized officers carrying sniper rifles and submachine guns into a (perceived) deadly confrontation is obviously unsafe for the recipient of this prank and the safety of the officers themselves—to say nothing of the huge waste of resources (LAPD claims each SWAT response comes with a $10,000 pricetag). But, sending those same amped-up, heavily armed officers to raid your neighbor’s home is probably one of the dumbest things someone could do to themselves.

Nevertheless, Adams was convinced a swatting was just the thing he needed to get the notoriety he thought he deserved.

According to a local report, Adams told police he was the victim of a prank. He then admitted to being a hacker himself at which point the police began a search of his electronic devices. The authorities not only quickly realized that had Adams placed the call himself, but also later discovered he may have been involved in six other such calls, in multiple states—an interstate crime which may require the intervention of federal law enforcement.

According to the Delaware County District Attorney’s Office, Adams is now facing charges of falsely reporting weapons of mass destruction, false alarms to an agency of public safety, and other related offenses to be determined.

This ambitious act of self-destruction aside, swatting operations have frequently targeted celebrities such as Tom Cruise, Miley Cyrus, and Clint Eastwood, much to the dismay of the LAPD. Last year, a 12-year-old was charged with two felonies after a false report lead a SWAT team to the home of Ashton Kutcher.

In March, the home of noted computer security journalist Brian Krebs was visited by a tactical police unit after hackers spoofed a 911 call from his home. The swatting followed a report filed by Krebs on a Deep Web marketplace where hackers traded social security numbers and credit reports.

The lesson here is not that swatting is dangerous (it is) or that not everyone who calls themselves a hacker is a genius (they’re not), but that taking shortcuts while seeking to become Internet famous is perilous. If you’re going to play a prank to gain notoriety, try sending pizzas to your house instead of a SWAT team.

Correction: According to Philly.com, Adams called authorities to his neighbor’s house, not his own as originally reported. When police discovered that the resident at the address in question was out of town, they questioned and charged Adams, who lived next door.