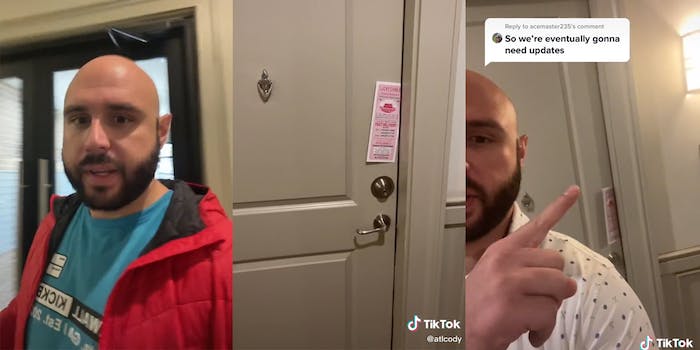 ‘No one on my floor has come in or out of their building in 3 days’: Viral TikTok of flyers left in apartment doors sparks theories

'Are you really telling me people live here, but no one on my floor has come in or out?'

A TikToker named Cody has been documenting some of the intricacies of his Atlanta apartment complex, including menus stuck in doors for days and vehicles in the parking garage that are collecting dust.

Is this something sinister, or completely explainable?

In his initial TikTok, posted on Halloween, Cody says that although he was told the building is full, several doors have Chinese food menus stuck in them—which he says were put there two days earlier. Well, that’s not that strange, right?

He then shows the parking garage, which he claims houses more cars than there are apartment units (on his floor, at least). In a more recent TikTok, Cody, again in the parking garage, zooms in on a car with tags that expired in 2019, covered in what appears to be a layer of dust. He also visited the property’s website, which apparently shows four open units. Cody started the hashtag #menugate.

Of course, the comments sections lit up with theories. Perhaps Cody, whose bio lists attorney and engineer, is a “ghost but doesn’t know it,” or he’s in his “own version of The Truman Show and all of the extras went on strike”? Is it a way to “artificially inflate demand and reduce supply”? Empty corporate housing or Airbnbs? (Probably getting warmer with the last two.)

“Your building got zillow’d,” one commenter said, referencing real estate site Zillow, which recently vowed to slow down its property-buying rampage.

The Daily Dot reached out to Cody for comment or updates, but several commenters asked him to check the Wi-Fi networks or start knocking on doors. In a TikTok from the weekend, he shows a message from someone who claims they used to live in the same apartments (the property name was blurred out), and says that it got “super weird when the management changed.” This person’s fiancé also allegedly found a “baseball bat wrapped in barbed wire in the courtyard,” which led to some Walking Dead jokes.