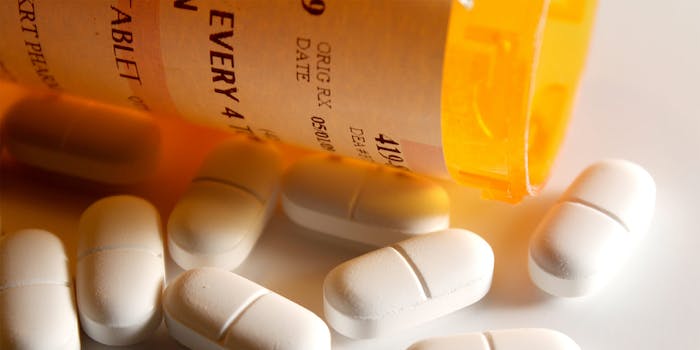 Melania Trump is solving the opioid crisis with low-rent graphics

This morning, President Donald Trump announced he would hold a major briefing on the opioid crisis from his country club in Bedminster, New Jersey.

I will be holding a major briefing on the Opioid crisis, a major problem for our country, today at 3:00 P.M. in Bedminster, N.J.

In a rare feat of coordination for the administration, First Lady Melania Trump tweeted about the briefing, which will include her and Secretary of Health and Human Services Tom Price.

While the message is certainly admirable, the presentation left much to be desired. Because it’s.. a little low-rent.

This looks like the title card of a 70's grindhouse film https://t.co/V8Swkr51hU

By contrast, here is the vice president’s tweet about it.

Later @POTUS Trump & @SecPriceMD will meet to discuss continued efforts to end the scourge of opioid addiction in this country. pic.twitter.com/VwbwlFHPiP

After all, the opioid epidemic is one of America’s most profound social issues. More than 35,000 people died from overdoses of either prescription opiates or heroin in 2015. Surely it merits more than lifting an image from Getty, zooming too far in so it’s pixelated like whoa, and spending nine seconds debating the font?

It’s been a point of humor from the Twitterati that the Trump White House tends to skimp on its budget for design: There was the iMovie sent out after Aya Hijazi was freed, and the initial Trump-Pence campaign logo that was just a bit sexual. But still, the pixelated nature and lack of spaces in the image really left people bewildered.

where to start with this exploitive hot mess https://t.co/kBqACUKm8v

Ok but whoever looked at this graphic and copy and said it was ready to run as the First Lady of the United States is definitely on drugs https://t.co/CJDo0gIxuP

This looks like the title card of a 70's grindhouse film https://t.co/V8Swkr51hU

I have full faith in our government's ability to STOPDRUGADDICTIONhttps://t.co/OA58styfb9

My tax dollars call for a better design eye than this. https://t.co/EMP7Lcprtu

Then again, maybe that the tired view. The wired view is that a lack of spaces is a new messaging strategy from the administration. After all, here’s what the president tweeted later in the day.

E-mails show that the AmazonWashingtonPost and the FailingNewYorkTimes were reluctant to cover the Clinton/Lynch secret meeting in plane.

Then again maybe they’re just bad at this.