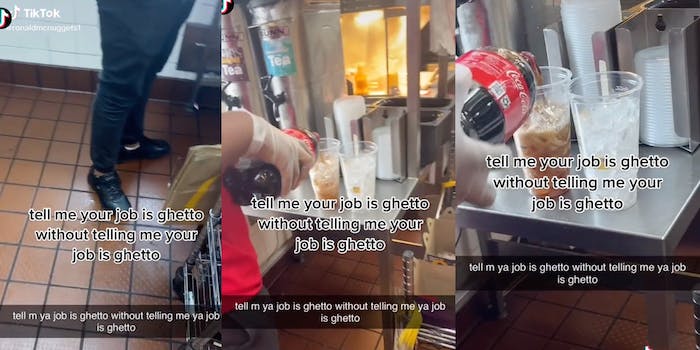 'When I worked at Carl's Jr. we did this for a week and no one noticed or even complained.'

A video showing McDonald’s employees pouring sodas out of bottles instead of a soda fountain has garnered over 870,000 views on TikTok, where it also sparked discussion about how common the practice is.

The video features two employees using the bottled sodas instead of the soda fountain because it is not functional, a situation that is all too common in the fast-food industry, according to the comment section. Many commenters shared their own experiences of having to hand out cans of soda or be asked to run to the store to grab a few liters of various beverages to meet the needs of customers when the machine needs to be serviced.

“I work fast food (too) and when we run out of sweetener we have an employee run to a store (and) grab soda bottled to get us through a few hours,” one commenter wrote.

Some commenters debated whether customers would even be able to tell the difference.

“I think (people) would notice it was different because it won’t have that spice to it like the fountain one lol,” one commenter wrote. “It would be different if it was Pepsi.”

Another commenter replied that their Carl’s Jr. location had done this exact thing for a week without anyone being the wiser.

“They wouldn’t,” the commenter wrote. “When I worked at Carl’s Jr. we did this for a week and no one noticed or even complained.”

The Daily Dot has reached out to @ronaldmcnuggets1 via TikTok direct message and to McDonald’s via email for clarification regarding its policy for soda fountain malfunctions.