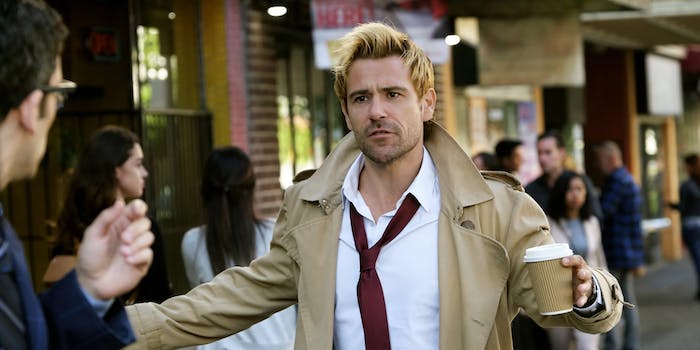 DC’s Constantine will leave ‘Legends of Tomorrow’ because J.J. Abrams is rebooting the character

During the Legends of Tomorrow panel at this weekend’s San Diego Comic-Con, fans learned some sad news. DC Comics antihero John Constantine, a recurring Legends character since 2017, will leave the show next season. Ordinarily, this would be a run-of-the-mill casting update, but it’s tied up in a weird conflict within the DC franchise: Constantine is only being written out because J.J. Abrams wants to reboot the character at HBO Max, with a different actor.

Superhero fans are used to seeing the same characters appear in different mediums, like the simultaneous airing of Gotham (featuring a young Bruce Wayne) and the big-screen Batman franchise. But apparently, there are limits. Matt Ryan has been playing Constantine since his own shortlived solo series in 2014, and his depiction is much closer to the comics than the 2005 blockbuster starring Keanu Reeves. For many newer fans, Ryan is the defining version of Constantine. It would be hard to launch another reboot while he’s still appearing on the CW, even if HBO Max’s version is more prestigious than the proudly B-list tone of Legends of Tomorrow.

If Matt Ryan had lost his job due to this CW/HBO Max dispute, then it would definitely count as a dick move. But this is Legends of Tomorrow, a show with a famously chaotic attitude. The show’s writers found a creative solution: As soon as Constantine leaves in season 7, Matt Ryan will return as a brand new character.

Ryan will now play Dr. Gwyn Davies, “an eccentric scientist from the early 20th century” who will assist the time-traveling Legends team. This presumably means Ryan will lose his unconvincing Constantine dye job, and (judging by the name) will return to his natural Welsh accent. Considering the show’s comedic tone and love of bizarre plot twists, the main characters will probably just joke about his new character’s mysterious resemblance to John Constantine, and move on. It’s no weirder than some of the hijinks you see in daytime soaps.

The HBO Max Constantine reboot will reportedly cast an actor of color in the title role. It’s expected to have a darker tone than the previous two adaptations, since Matt Ryan’s version is more comedic while the Keanu Reeves movie departed greatly from the comics, recasting Constantine as an action-packed American hero. The classic Hellblazer comics are more cynical and politically complex, mixing dark magic with social realism in 1980s-’90s Britain. Rather than depicting Constantine as a powerful magician, he’s more likely to defeat his enemies through lies and trickery—usually without a true sense of victory. This downbeat, morally ambiguous tone didn’t work for a Hollywood blockbuster, but it may be more viable in the current era of adult superhero adaptations.