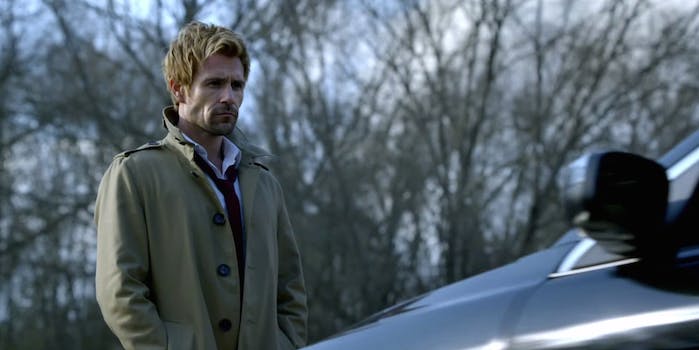 Constantine's soul may be damned, but how does the show stack up?

The latest comic book-turned-TV show is about to light up the screen.

Constantine premieres on NBC tonight, but fans at New York Comic Con were given an exclusive look at the pilot two weeks early. (Fans at San Diego Comic-Con also got a sneak peek this summer.) People were excited and intrigued to see John Constantine, the main character of the Hellblazer comics, and his trenchcoat brought to life and how it compared to the film version with Keanu Reeves playing Constantine.

For those who’ve never read the comics, the trailer gave audiences a vague idea of the quality of special effects and what would be in the show—or rather, the pilot, which featured most of the scenes teased.

Fans were also curious. The show’s had more than its fair share of controversies even before a single minute of it has aired on TV.

Due to network TV broadcast rules, NBC couldn’t legally show Constantine, who is a chainsmoker in the comics, smoking, but showrunner David S. Goyer and the other writers are showing plenty of hints, including Constantine putting out a cigarette and fiddling with a lighter. I counted at least two instances in the pilot and there will likely be a tally (and maybe even a drinking game) among fans for how often it happens in later episodes.

Later on, comments from showrunner Daniel Cerone regarding Constantine’s sexuality yielded massive backlash among Hellblazer fans, and Constantine’s producers faced accusations of straightwashing the comic’s canonically bisexual protagonist. The showrunners have backtracked since then, and in an in-depth (and must read) history of John Constantine and the Hellblazer comics, the creators of Constantine told Vulture’s Abraham Riesman that “they’re leaving the door open for some kind of queerness in the future.”

Even before fans at SDCC saw the pilot, Lucy Griffiths—who played the female lead—was written out of the show. In her place, producers cast Angélica Celaya as Zed, a pagan sorceress and former girlfriend of Constantine’s who plays an important part in numerous Hellblazer issues.

As it turns out, it’ll likely be a wiser choice in the long run because Liv Aberdine, the daughter of one of Constantine’s oldest friends, is one of the weaker parts of the pilot.

Having to fit a whole lot of plot and exposition into a little over 40 minutes of television, Constantine feels clunky and overloaded and dimly lit. If you didn’t read the comics, you might end up feeling lost for much of it.

Liv, as an “amalgam” of various characters from Hellblazer, felt more like a mashup of comic book tropes while playing that “fish out of water” role. With Liv’s departure making headlines, audiences don’t really have a reason to care about her, and you don’t find out much about her that doesn’t involve her mysterious missing (and dead) father, who contacts Constantine through a vessel to ask him to protect her because a demon from Hell is hellbent on killing her. The episode doesn’t even pass the Bechdel test.

Liv exits by the end of the episode with a scene that was likely filmed and tacked on after the original pilot. In the final moments of the episode you get the smallest of teases of a major character.

Constantine’s supporting players, in the form of Chas (Charles Halford) and Ritchie Simpson (Jeremy Davies), serve mainly to push the plot forward in the pilot, although as Constantine’s friend and companion, Chas will likely play a bigger role. Harold Perrineau’s presence as Manny is almost as looming as the width of his character’s wings, and while it doesn’t have the full effect probably intended, I’m hopeful for future episodes; Perrineau was excellent on Lost and he looked to be having fun in the role.

The show wouldn’t work without the perfect Constantine, and luckily Constantine seems to have it with Matt Ryan. He’s brooding, he’s blunt and sarcastic, he’s funny, he’s got daddy issues, and he’s got a tough act to sell to an even tougher audience. He’s damned and haunted by the memory of the girl he condemned to hell, and here’s hoping that future episodes explore that more in-depth—and not just with more manpain.

With one episode, he easily falls in line with the long list of lovable TV jerks, and Goyer promised that Constantine is, indeed, a jerk.

There’s a lot of mystery and intrigue around what happened in Newcastle, a glimpse of a very iconic helmet, and plenty of nods to the comic that inspire hope that some of the Hellblazer writers will be onboard to write some episodes.

Let’s hope the fans are onboard too.