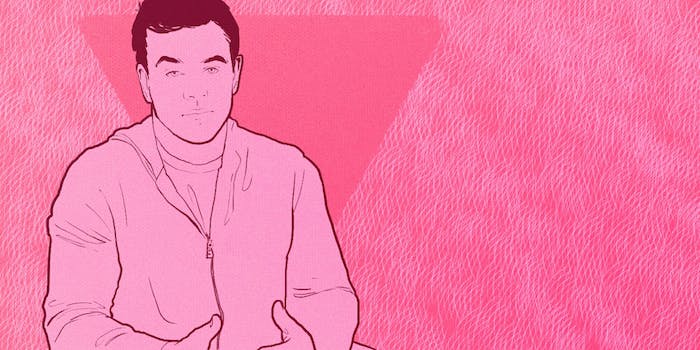 Matt Damon thinks actors should keep their sexuality a secret. Here's why he might be right.

Poor Matt Damon. Every time he opened his mouth in September, he put his well-shod foot in it. First, his comments to Effie Brown about diversity and Project Greenlight were criticized far and wide. Barely two weeks later, Damon became the center of yet another controversy, this time involving out gay actors in Hollywood.

Here is the story as was initially presented: Damon told Elizabeth Day of the Guardian that gay actors needed to stay inside the closet if they wanted to succeed. He pointed to Rupert Everett as an example of someone who had, in effect, screwed things up for himself by being an out gay actor.

It’s worth looking at the original interview to see what really transpired.

Referring to the fact that Damon had played Liberace’s lover in the 2013 television film, Behind the Candelabra, Day asked Damon, a straight man: “Is it harder for actors to be openly gay in Hollywood?” The response from Damon was, “I’m sure. When Ben and I first came on the scene there were rumours that we were gay because it was two guys who wrote a script together.”

He continued, “It put us in a weird position of having to answer, you know what I mean? Which was then really deeply offensive. I don’t want to, like [imply] it’s some sort of disease—then it’s like I’m throwing my friends under the bus. But at the time, I remember thinking and saying, Rupert Everett was openly gay and this guy—more handsome than anybody, a classically trained actor—it’s tough to make the argument that he didn’t take a hit for being out.”

Normal? Normal is a sexuality. Normal is “straight.”

So this is, to be fair to Damon, a far cry from the impression that he said, in essence, “Stay in the closet!” And rather than blame Everett for being out, Damon was simply pointing to and implicitly criticizing the Hollywood system for shutting him out.

And yet. Some of what Damon did say reveals a lot about Hollywood’s sense of how sexuality ought to work.

In another part of the interview, Damon says, “I think you’re a better actor the less people know about you period. And sexuality is a huge part of that. Whether you’re straight or gay, people shouldn’t know anything about your sexuality because that’s one of the mysteries that you should be able to play.”

Day and Damon both go on to play up how “normal” he is:

Other than this, Damon insists he’s entirely normal. He has a wife, Luciana, whom he met while filming in Miami in 2003 when she was working behind a bar, and the couple have four daughters ranging in age from four to 16 – Alexia, from Luciana’s previous relationship, Isabella, Gia and Stella. Damon is a self-confessed family man. He has a rule that they will never be apart for more than two weeks while he’s filming. His daily life is so average even the paparazzi have decamped from outside his home in Los Angeles because he never does anything that merits a photograph.

Here’s the problem, though. Damon ignores, perhaps not willfully but simply because he knows nothing different, that his constant talk of his marital status and his “normal” family life is part of his sexuality.

Normal? Normal is a sexuality. Normal is “straight,” and if Damon didn’t have this “normal” life and wife and four children to serve as confirmation of his “normalcy,” he would have been hounded for possibly being gay, just as his pal George Clooney was for years before he finally, after years of declaring he had no interest in marriage, tied the knot with Amal Alamuddin.

Or take an even better example: Angelina Jolie. Today, Jolie exists on an ethereal plane, flitting elegantly in exquisite designer outfits between her palatial residence in France and other homes on several continents, her large and multicultural brood of children and iconic blonde husband in tow, the equally large retinue of nannies and caretakers carefully tucked out of view in all photographs. She’s not just some token “Goodwill Ambassador” for the United Nations but a bona fide Special Envoy of the UN High Commissioner for Refugees, an actual diplomat.

But there was a time when Jolie was a wild, queer child, clad mostly in black, inhabiting intense and aggressive roles in Gia and Girl, Interrupted; jumping into pools at Golden Globe parties; and tongue-wrestling her biological brother on the red carpet.

At some point, her sexual edginess and presumed bisexuality became too unwieldy for someone who wanted to be more than a good actor in interesting roles and a tabloid favorite. As I wrote here in 2007, Jolie’s career has been a steady trajectory of de-queering and straightening out. First, she married Billy Bob Thornton and the two regaled us all with tales of Very Heterosexual Sex in the back seats of limousines and walked around with vials of each other’s blood around their necks. When even that got to be too much, Jolie began the next chapter of her life, one over-determined by motherhood and an eagerness to Do Something About the State of the World. Hence, the Angelina Jolie we see today.

Boring? Sure. But in an age where it’s celebrity and not cinematic success that counts, she has built up enough cultural cachet that she will continue to make the right kind of headlines and reap profits from endorsements and baby pictures; financially at least, she and her kids will be alright.

But none of this would have been possible for the old Angelina Jolie, who seemed headed to a disastrous and short-lived career, flaming out in a burst of queer ambiguity. One false step—a lesbian lover somewhere, perhaps—and Jolie will be back to trying to get suitably challenging roles in films, her queerness a taint on her sainthood. (To her and Pitt’s credit, they appear to be doing an excellent job of affirming their child Shiloh’s gender ambiguity.)

To return to Matt Damon and his “normal” life: His comments, whether about out gay actors or about how actors should be mysterious about their sexuality, came just before Oct. 11, which has been National Coming Out Day since 1987. To many, his words might emphasise the importance and necessity of “coming out,” a ritual that is often presented as being critical not only to individual self-affirmation but to community survival. The rationale behind Coming Out Day is simply this: The more people know more gays and lesbians, the better it is for queer people who will automatically be treated better because. As the Human Rights Campaign (which has appropriated the day, even though it has nothing to do with its origins) suggests, “When people know someone who is LGBTQ, they are far more likely to support equality under the law. Beyond that, our stories can be powerful to each other.”

There are fundamental problems with this rationale. First of all, the agenda of “equality”—gay marriage, fighting openly in imperial U.S wars, and hate crime legislation—is not necessarily something that everyone is on board with. And I don’t just say that the co-founder of Against Equality; increasingly, there’s a larger cultural awareness that the equality agenda has set us back.

There’s another problem, which is the idea that people need to know queer people in order to care about them. This does not actually demonstrate a widening of our sense of social justice, but its shrinking.The idea that people will support gays and lesbians because they know them presupposes a society bereft of a rich commitment to abstract ideals of justice. In other words, surely people should support gay and lesbian/queer rights regardless of whether or not they know any such people. I, for instance, believe that clean drinking water should be freely accessible to everyone. I shouldn’t have to watch someone die of thirst to feel that.

What’s more, as I’ve written elsewhere, coming out is based on a mostly white, eurocentric notion of sexuality. Even in the United States, different groups and communities negotiate sexuality differently. As Patrick Johnson’s complex oral history, Sweet Tea: Black Gay Men of the South tells us, black queerness in the South makes itself evident differently than in, say, the mostly white gay enclaves of Chicago’s gay neighbourhoods. In one place, being “out” is not the point even as everyone knows you’re a flaming gay man in a member of your all-gay chorus in church. In another, you are practically required to hoist a rainbow flag outside your window to indicate you’re gay. Not being out does not equal being closeted in the South and in many parts of the world. In Asia and the Arab world, holding hands in public or, really, even actually having sex with other men or women, is no indication of a different sexuality.

In this context, the call to come out is not a liberatory one but coercive, demanding that we all plane down our different and complex relationships to our queerness and instead hew to a monolithic idea of what counts as queer.
Ultimately, that prescriptiveness is also what enables Matt Damon to so blithely and perhaps cluelessly state, in the same interview, that actors should keep their sexuality a mystery and that he is just a normal guy. Ultimately, it’s not the closet that damages us the most because, let’s face it, we can do all sorts of things in the closet where things stay hidden. Ultimately, coming out is a one-time deal. Straightness, on the other hand, is the more tenuous and precarious place to be, always a work in progress and always under threat of being blown up with a single misstep.