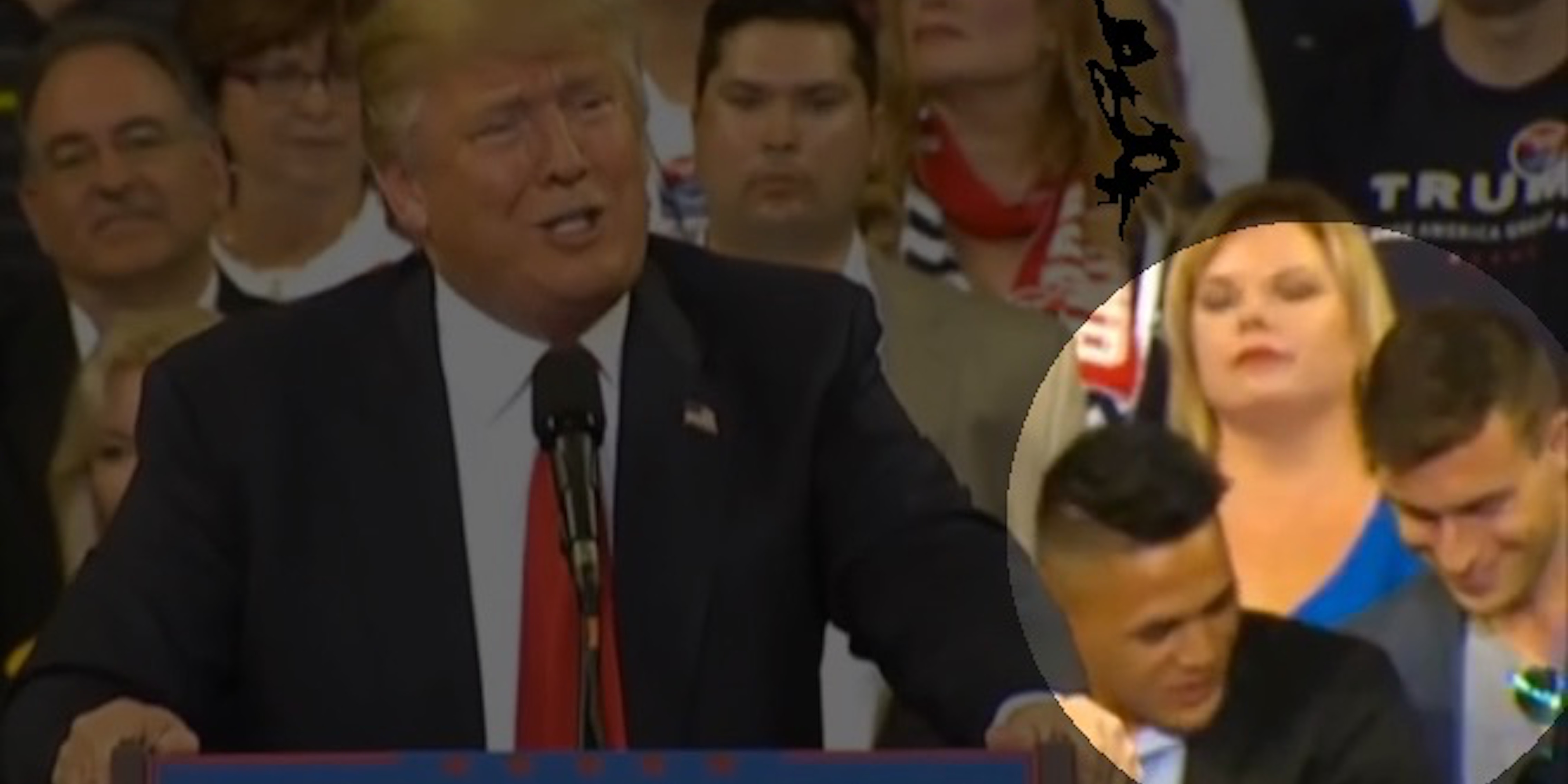 They stole the show.

Donald Trump‘s appearance on the University of Central Florida campus on Saturday made headlines—but not because of anything he said.

The Internet was instead captivated by two young men standing to Trump’s left after seeing one feed a chip to the other, airplane-style. Who were these mystery dudes? Were they “Trump bros?” Were they protestors?

Sign that US political campaign has gone off the rails: full grown adults feeding each other during rallies https://t.co/DMA7vPjCjD

Nope. Turns out they were just hungry, and the nachos they’d bought for the event were really, tremendously, irresistibly good.

Marius Loots, the chip-eater, told the Daily Dot via Facebook that he and his friend aren’t Trump supporters. They decided to attend the rally after some friends offered them VIP tickets.

“I go to the school, so we thought ‘why not?'” he said. “It was a chance to hear Trump directly without media bias, even though I made it clear to the people who invited me I wasn’t endorsing him.”

The pair didn’t realize they’d be on camera, directly behind Trump. They’d originally had different seats but were told to move over because billionaire Trump supporter David Siegel—famous for wanting to build his own private version of the palace at Versailles—wanted their spots. (You can see Siegel in the left of the frame above, near Trump’s right hand.)

“Some guy came up to us and said, ‘Do you know who is going to sit here? A billionaire. So I’m going to need you guys to move over.’ If it wasn’t for that, we probably wouldn’t have been onscreen at all,” Loots said.

Loots and his pal didn’t come to the event with plans to troll Trump, but the rally was lengthy, and listening to the Republican frontrunner’s notoriously repetitive riff about winning and Making America Great Again was starting to make Loots hungry. Fortunately, his friend still had the pork and cheese nachos they’d picked up at concessions earlier.

If you watch the full video of the rally, you’ll see Loots whisper in his buddy’s ear just before the nacho slowly, deliberately—you might even say heroically—makes its way into his mouth.

Were the nachos good? Hell yeah—they were great.

“They were amazing,” Loots confirmed. (It should be noted that this guy loves nachos. When interviewed on Tuesday evening, Loots sent a photo of the nachos he was eating at that very moment.)

But when you’re standing behind the man the American media has been unable to turn its focus from this year—a man known to have suspected dissenters thrown out of his campaign events—an innocent nacho can quickly turn into something more. Is it any wonder that people were suspicious of the nacho boys’ motives?

“The funny part was the comments from Trump supporters thinking we were coordinating protests,” Loots said.

Indeed, there were several calls from #TrumpTwitter for the lads to be investigated for supposed subversive activity:

@DanScavino Who were those creepy guys making signals behind Trump?

Again, what was going on with the guys behind Trump is: They were bored and hungry and had access to very good nachos. But perhaps the choice of snack—given Trump’s opinions on Mexico—was exactly the problem.

There are long lines for nachos in the arena. As @nando731 points out, there's irony in Trump lovers buying Mexican food. #TrumpUCF

Fortunately, the Secret Service was less paranoid than Trump supporters on Twitter. Agents did confront the two nacho-loving bros but apparently decided that hand-feeding your friend is not (yet) a crime.

“We noticed a few [Secret Service agents] get closer to us throughout the speech, and we were escorted out after by a few of them, but they were very professional and there was no issue,” Loots said.

And although he went into the rally feeling “neutral” about Trump, he quickly made his mind up about the controversial candidate.

“I really only decided Trump wasn’t for me when he asked people to pledge an oath to vote Trump; the only thing I pledge to is this country and defending the Constitution,” he explained.

Sounds like the evening left a bad taste in his mouth.

Photo via Right Side Broadcasting/YouTube