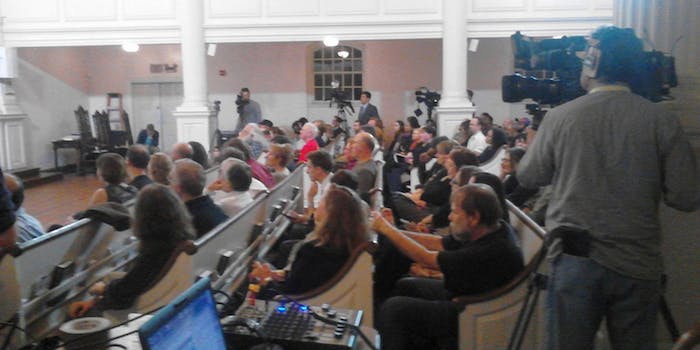 Manning lawyer: ‘We have a serious problem in this country’

During the conference, Coombs read out a statement from Manning, which said, in part, “We consciously elected to devalue human life in Iraq and Afghanistan.” He asserted that the American response to 9/11 will in time be viewed in same light as McCarthyism and the Japanese-American internment camps of World War II.

“What I can tell you about Bradley Manning is a very moral person,” Coombs said. “And that morality was with him from the beginning. … He went [to Iraq] with the goal of helping save lives. … I certainly believe that because of his strong sense of morality that he would do the same thing.”

Regarding the verdict, he said: “Myself and others were in tears. [Manning] looks to me, and he says, ‘It’s OK. It’s alright. I know you did your best. I’m going to be OK. I’m going to get through this.’”

A campaign to encourage President Obama to pardon Manning has been launched by the BMSN and Amnesty International, with a petition on We the People, the White House’s petition platform. The group has also begun fundraising for a college trust that will allow Manning to attend university once he regains his freedom.

Coombs, who will remain as Manning’s attorney, is not holding out much hope for a presidential pardon. He said Manning will be eligible for parole not in 10 years, but in about 6.5, given his time served.

Regarding the fairness of the trial, Coombs noted the difficulties that journalists had covering it.

“When it comes to a fair trial, what’s important is: What is the perception of the public? Is it perceived as a fair trial? In this instance, that answer would have to be no. And that’s sad.”

In 25 years of defense work, Coombs said he had seen child molesters and murderers who received much less time.

At one point while he was speaking, Coombs slipped up and said “Guantanamo” when he meant Quantico.

An early discussion on a plea deal, Coombs said, would have saddled Manning with a sentence longer than 35 years and would have compelled him to testify about every aspect of the leak and the leaked materials.

“With regards to my client’s feelings on WikiLeaks,” Coombs said, “the chat logs talk about how he turned to WikiLeaks for conversations, that ranged the whole spectrum of topics. I think he viewed that as a lifeline to him while he was deployed. The idea that WikiLeaks or Julian Assange or anyone else forced him to do anything, or asked him to do anything, is just pure fabrication.”

Addressing whistleblowing, Snowden and the National Security Agecy, and the closed nature of the trail, it was Coombs’ belief that the NSA leaks were not great for his client, but “it also had some benefits for us because it brought attention back to his case.” He also believed there was nothing that came up in court that justified closing it to the public.

“We have a serious problem in this country,” he said, “and that’s overclassification.”

Within the day it is likely that Manning will be moved from Maryland to a post-trial confinement facility near the Ft. Leavenworth disciplinary barracks, to be released in about a month into general population.