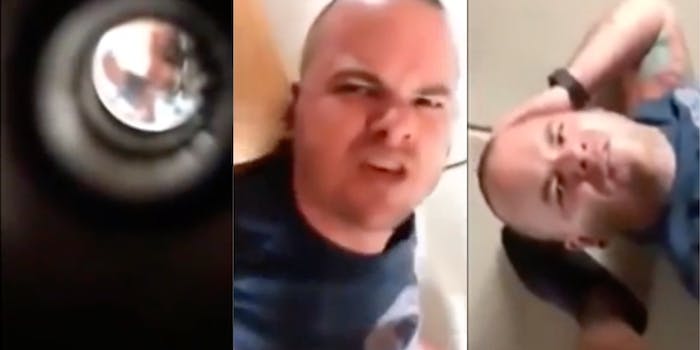 Video: Neighbor tries breaking into man’s apartment, says he was ‘practicing’ how to pick his own lock

'I was trying to figure out how to do it on my door.'

The old saying goes: “Play stupid games, win stupid prizes.” A trending Reddit video shows a neighbor “playing stupid games” and finding himself caught trying to break into someone’s apartment. He then claims he was picking the person’s lock to practice getting into his own apartment.

Posted to Reddit’s r/WinStupidPrizes, a man is filming his door because he can hear and see his neighbor working his lock tumbler, seemingly trying to break into his apartment. He puts the phone’s camera up to the peephole, where another person is evidently picking his lock.

He lets the would-be cat burglar play with the lock for a second. He suddenly unlocks the door from the inside, jumps on top of, and straddles the lock-picker while in the breezeway.

“Dude, I wasn’t doing anything, I promise,” says the lock-picking neighbor.

“Why you trying to break into my crib, bro?” says the man, right before he slaps the neighbor for his transgressions.

“Please stop, dude; I wasn’t,” the lock-picker says in a plea. The man slaps him again, even harder. But then, making it worse, he provides a sketchy reason for picking the man’s door lock.

“I was trying to figure out how to do it on my door,” he says. “My door is fucked up, so I had to try another door to do it on.”

The angry videographer slaps him again.

The potential burglar continues making up excuses about his actions, and it’s clear they are acquainted. The man, who isn’t buying what the neighbor is selling, says, “you were trying to break into my shit the whole time.”

“I was not!” says the would-be intruder, essentially running away from an ass-whopping.

The comments were great, of course.

“You have to own it, so much that you believe it yourself, no matter how ridiculous it is,” wrote r/Luthais327.

r/UnDeadBread commented: “It sounds like some of the dumb shit my kids come up with when I catch them doing something they’re not supposed to do.”