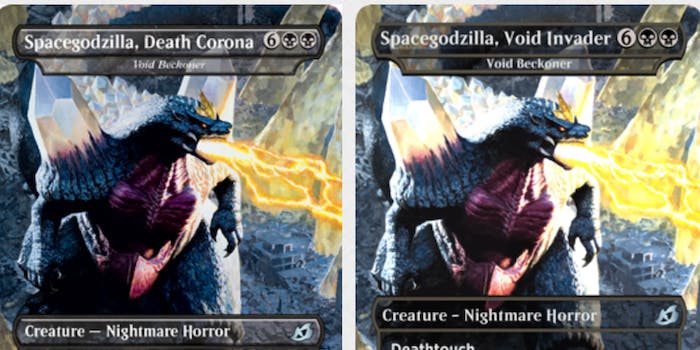 The name was picked out months ago.

A canonically correct name for one of the monster’s abilities in Magic The Gathering has put its creators in a tight spot.

Spacegodzilla has an ability called “Death Corona,” which was printed on a card in the game’s latest expansion. Wizards of the Coast, the company behind the card game, has decided to reprint the card under a different name, given the current pandemic’s name is “coronavirus.” The coronavirus has so far killed 50,000 and infected more than 1 million worldwide.

“The initial printing of Ikoria will arrive on shelves soon and this card will be part of the set, but we are taking steps to remove or change the card where possible,” Wizards of the Coast said in a statement.

The company said it was changing the name to “Void Invader” for all future printings.

“In context, the card we’re about to show you made sense when it was originally conceived—’the Corona Beam’ is Spacegodzilla’s traditional breath weapon,” the statement reads.

Fans are applauding the company for its decision.

“Imagine having the name ‘Death Corona’ ready for months, and slowly realizing it’s gonna become a problem once the set drops,” Twitch streamer Gaby Spartz wrote in a Tweet. “Good on WotC to get out ahead of it, but man they ran SO bad.”

However, this limited release’s tie to a major historical event and subsequent name change has some speculating about how much this collector’s item could end up costing.

“Copies of this card with the Corona name are probably gonna be more expensive as a result of this,” Twitter user @pluch1016 wrote. “Terrible luck for Wizards with this name.”

Another user jokingly suggested that the coronavirus should be the one to change its name since Wizards seemingly had first dibs.

“I mean, if MtG claimed the name first, shouldn’t it be the virus that has to swap?” Twitter user @insidetheboxjd wrote.

The Daily Dot has reached out to Wizards of the Coast for comment.