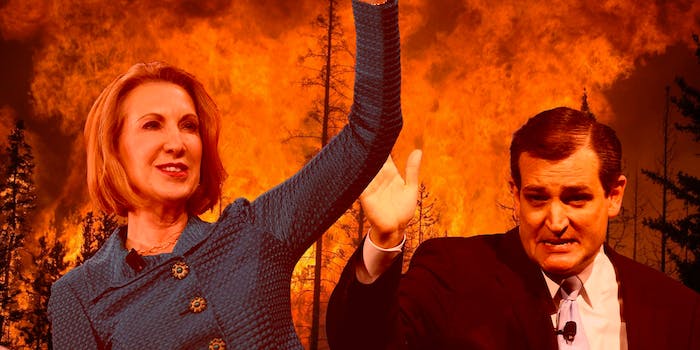 Lucifer2016.com has an absolutely hellish redirect

All thanks to John Boehner.

Have you heard? The devil’s running for president.

That’s what the current election looks like to former Speaker of the House John Boehner, who visited Stanford University on Wednesday evening. According to the Stanford Daily, this is what happened when Boehner was asked about his feelings on GOP presidential candidate Ted Cruz:

Boehner made a face, drawing laughter from the crowd.

“Lucifer in the flesh,” the former Speaker said. “I have Democrat friends and Republican friends. I get along with almost everyone, but I have never worked with a more miserable son of a bitch in my life.”

Thursday, everyone went pretty much bonkers over Boehner, who after all had not just likened Cruz to the devil but literally called him Lucifer in a human vessel. That almost overshadowed Lucifer’s, err I mean Cruz’s, announcement that Carly Fiorina will join his campaign as his choice for vice president.

And now, thanks to an unknown mischief-maker, visiting the URL Lucifer2016.com will redirect you to the Satanic duo’s campaign website. Makes sense, considering that a country with them two in charge sounds a lot like hell.

Similarly, CarlyFiorinaForVicePresident.com will take you to a different website than implied. But at least in this case you’ll wind up on the site for an organization worth supporting.

And you know what? Cruz doesn’t even deserve to be called the devil. Lucifer was an angel before falling from heaven. And Cruz is very unlikely to ever hold such high office.