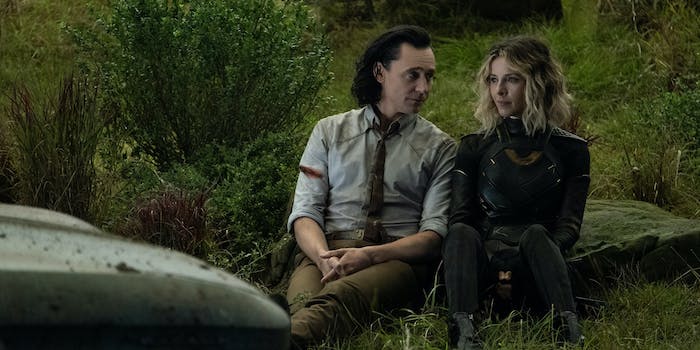 The show's director says Loki and Sylvie's relationship is about 'self-love.'

Loki‘s main romantic pairing is between Loki and Sylvie, a female version of Loki from another universe. The show’s creators undoubtedly expected to inspire strong reactions by introducing a female Loki, along with the confirmation that both Loki and Sylvie are queer. But they probably didn’t expect the most common criticism of the Loki/Sylvie romance: many fans perceive it as incest. Basically, Loki/Sylvie reignited an old debate immortalized by this viral 2015 Buzzfeed quiz: Would you fuck your own clone?

The controversy hinges upon the fact that Loki and Sylvie (probably) have the same parents—albeit in different universes. MCU canon introduced Loki as a blue-skinned Jotunn who was adopted as a baby by the Asgardian king Odin. We assume that Sylvie has similar origins, although aside from a brief flashback to Sylvie’s childhood in Asgard, we don’t know anything for sure. Some people interpret this as a kind of brother/sister relationship, echoed by the fandom term for this trope: “selfcest.” Meanwhile, other Loki fans find the backlash absurd because a) Loki and Sylvie aren’t traditionally “related,” and b) it’s a hypothetical situation with no bearing on reality.

Speaking to Polygon, Loki director Kate Herron weighed in on the debate. “[The show is] looking at the self and asking ‘What makes us us?’” she said. “I mean, look at all the Lokis across the show, they’re all completely different. I think there’s something beautiful about his romantic relationship with Sylvie, but they’re not interchangeable.”

In Herron’s interpretation, the two characters are “both Lokis, but they aren’t the same person,” adding that “they have completely different backgrounds.” Thematically, she explained, Loki and Sylvie’s relationship is about “self-love.”

Amusingly, the most popular pairing in MCU’s Thor fandom is already Loki/Thor, with more than 11,000 fanfics on Archive of our Own. So while people debate the ethics of Loki kissing his alternate-universe self, Thor fans have been shipping him with his adoptive brother since 2011. And that’s without even mentioning the rampant incest that occurs in Norse mythology.