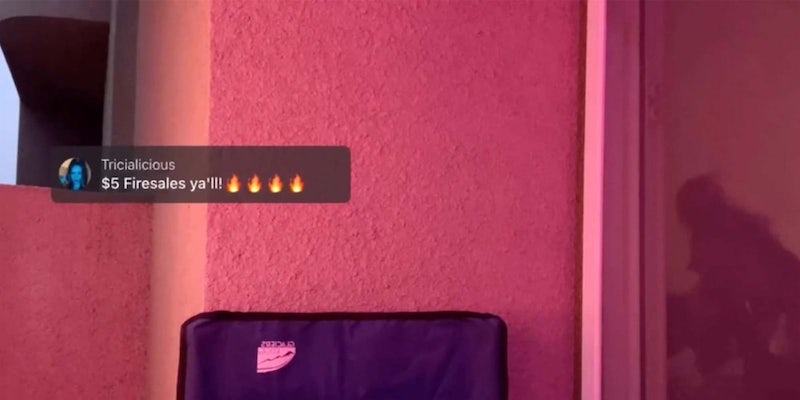 The video sparked a conversation about domestic violence against men on Reddit.

In a livestream from early July, Tricia Evans, also known as Tricialicious, is seen repeatedly hitting her boyfriend and calling him the N-word and a homophobic slur.

“I’m gonna beat his ass,” Evans says before stepping off camera. The physical altercation is then shown through shadows on the walls of the room in which the livestream is being filmed.

The video found renewed interest on the r/iamatotalpieceofshit subreddit where redditors were appalled at Evans’s behavior.

“It has come to my attention that the guy is the husband or boyfriend so in light of that: I hope he leaves her and find someone better,” one user wrote.

“Abusive, racist, homophobic garbage,” another said. “Has she been reported? She should be behind bars.”

“Words cannot describe the sheer confusion I have on why the hell you would do that and record it,” a redditor remarked. “I think I even heard an n word in there. Horrible person.”

It also sparked a conversation about domestic violence against men in the comments below the post, with many people sharing their experiences.

In another livestream on July 4, however, Evans and the man shown in the video said that their fight was an elaborate stunt.

“It was acting,” says Evans’s boyfriend.

“We were trolling,” confirms Evans.

Her boyfriend goes on to confirm that he was not physically harmed and is an actor. Evans also apologized for the stunt, calling it “in bad taste.”

“But, I kind of have made a career out of that, doing things in bad taste,” Evans said. She also told viewers that they were “asking for” a prank by donating to her livestream, and that she and her boyfriend had been drinking the night the stunt was filmed.

On her Youtube channel, Evans identifies herself as an insult comic who is “always serving up spicy Kobe beef & piping hot tea.”

In the livestream, Evans also said she and her boyfriend had been “cleared by the LAPD” and had “cleared” the stunt with Child Protective Services.

“We promise to tone it down,” said Evans.

The Daily Dot has reached out to Evans, the Los Angeles Police Department, and Child Protective Services in the State of California.