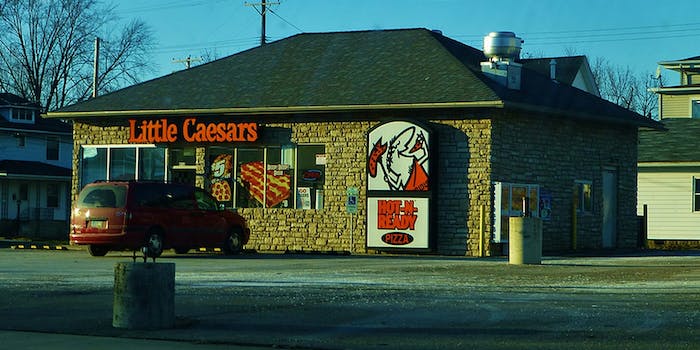 Why all y’all hating on Little Caesars, fam?

Shut up and eat your cheesy bread.

Is it just me, or do people only order pizza from Little Caesars so they can complain about it?

Making the rounds online this week was an admittedly hilarious exchange between the ultra-cheap fast food chain and a customer dissatisfied with how his pie was prepared:

You’ve got to feel for whoever runs the brand’s Twitter account. Instead of bantering with users about fun promotions and bacon-encrusted products, they mostly field angry @’s about having to wait longer than five minutes for so-called HOT-N-READY boxes. Some people have no chill.

Can we talk about all the people waiting on their "hot-n-ready" box haha @littlecaesars pic.twitter.com/tOvyHYYWET

@littlecaesars You've officially turned into home of the hot n never ready!! 20+ in a drive thru is terrible. #stepyourgameup

Can you hire people that know how to cut a freakin pizza please! @littlecaesars

@littlecaesars like, it's weird waiting more than five minutes for food here…. Lol

Um, what were y’all expecting? An instant $5 pizza that looks like it came out of a brick oven in Naples? If you prefer Pizza Hut, why didn’t you roll down the street to Pizza Hut? Are you surprised that a cashier making minimum wage doesn’t take pride in his or her work? Of course not. You know Little Caesars is trash; that’s why you typically go there when you’re dead broke and/or have the munchies.

And, for some reason, simply roasting this humble pizzeria is not enough. One of the most widely plagiarized posts on Twitter—and the original was likely faked as well—suggests that Little Caesars unilaterally blocks anyone who confronts them with evidence of their incompetence.

So little Caesars jugged me I mention them n confront them and these mfs blocked me ion believe this shit😂 pic.twitter.com/MN3MqburtD

Moreover, a block from Little Caesars appears to be a badge of honor for many a troll. The chain has even had to push back against customers who blithely claim to have been blocked.

tb to when I got blocked by little caesars

C’mon, fam. That’s not a good look. At the very least, I’d hope you have something better to do than drag a downmarket purveyor of greasy, Italian-themed cuisine. Because apparently you still enjoy their food enough to make it the fastest-growing pizza chain around.

I can’t believe I have to say this, but: LEAVE LITTLE CAESARS ALONE.