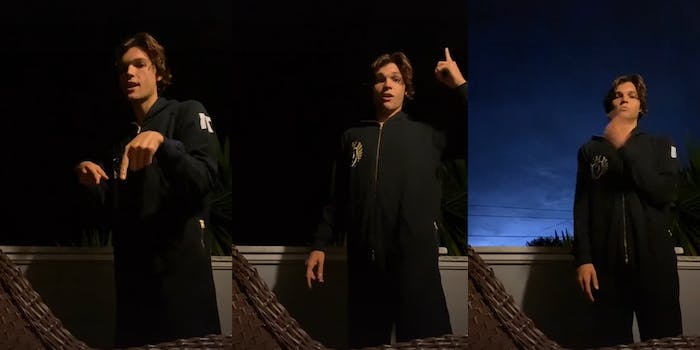 The Michael Kelso lookalike apparently can control the weather.

Last month, Mike Panero set up what seemed like an innocuous TikTok: He’s outside at night, his camera trained on him and the sky behind him. “I think I’m in a thunderstorm, I’m not sure,” he says.

He ventures into some vague hypotheses about rain and thunder, then starts a countdown from seven. When he hits one, there’s some perfectly timed lightning in the background, and Panero freaks out so hard he topples his camera. “Bro, I’m psychic.”

The video has more than 8 million views, and the comments are filled with people calling him Thor, or telling him he looks like Kelso (Ashton Kutcher’s character from That ’70s Show). People also pointed out the obvious: He called lightning thunder, which Panero attributed to dyslexia. Panero has also been very open about his ADHD, and how he gets through the more difficult moments.

The video picked up steam again this week after being posted to r/PublicFreakout, with the caption “Thunder boi.” But Panero posted another video that same August night, where he also mysteriously predicted lightning behind him.

Commenters again pushed the Kelso theory, citing Kutcher’s line from an episode of That ’70s Show where he tells Jackie (Mila Kunis) that he “can’t control the weather.” We reached out to Panero for comment.

Update 8:38am CT, Sept. 17: Panero gave the Daily Dot some background on the TikTok:

“The night of this video, I was struggling with a sinus infection, which is something I have been facing the past six months. [That] evening at 3am, a dry lightning storm came through Santa Cruz, California. I happened to wake up with intense pressure in my sinuses, feeling as if my head was going to explode! I had to wake my parents up for help. As I woke them up, we realized there was the most beautiful dry lightning storm happening outside. Lightning storms are a very unusual scene here, and it was truly magical.

“Unfortunately, the night this happened, the lightning sparked fires in the Santa Cruz Mountains, including other cities in Northern California. Over 500 fires were sparked by this storm that rolled through, causing devastation and stress to so many communities. These fires are still being maintained a month later and will impact families for years to come. Although, the silver lining is witnessing my community come together to support each other through this natural disaster and unprecedented times. I feel grateful to be part of this community in Santa Cruz, a town that is united and extremely supportive with one another.”