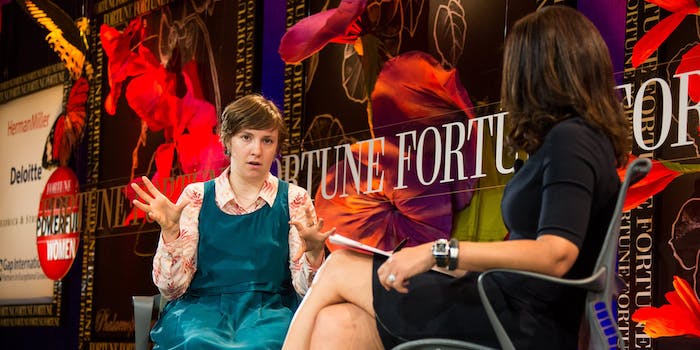 Lena Dunham didn’t rape her little sister—but why did she joke about it?

Making light of sexual assault is not OK.

It’s been a week since the latest furor over Lena Dunham—this time over a passage in her memoir Not That Kind of Girl which described childhood exploration of her infant sister’s vagina—erupted, and I still don’t know where I stand.

Conservative website Truth Revolt titled their Dunham takedown as “Lena Dunham Describes Sexually Abusing Her Little Sister,” which seemingly would have immediately galvanized left-leaning liberal Lena lovers…but it didn’t. Sure, sites like Salon and Slate jumped to their requisite defense of Dunham (much of which was carefully worded around the gray-area laden issues of children being children, and Dunham’s sister Grace choosing not to identify as a victim).

Avoiding further armchair psychology is always a good thing, but the issue here at hand isn’t about where you stand on whether Dunham is a latent pedophile or a just another child. If there’s anything to take Dunham to task for, it’s this: the language she used to describe the situation. Dunham’s brand may be to provoke, but when it comes to complex sexual issues, being cavalier for the sake of shock value is lazy, careless and unsafe.

Where Dunham lost me was not in this passage, but in a sentence buried within (emphasis mine):

One day, as I sat in our driveway in Long Island playing with blocks and buckets, my curiosity got the best of me. Grace was sitting up, babbling and smiling, and I leaned down between her legs and carefully spread open her vagina. She didn’t resist and when I saw what was inside I shrieked.

My mother came running. ‘Mama, Mama! Grace has something in there!’

My mother didn’t bother asking why I had opened Grace’s vagina. This was within the spectrum of things I did. She just got on her knees and looked for herself. It quickly became apparent that Grace had stuffed six or seven pebbles in there. My mother removed them patiently while Grace cackled, thrilled that her prank had been a success.

Given that in the same breath, Dunham also described trying to convince then-slightly older Grace to kiss her in exchange for candy or lay on top of her for unlimited TV time, as behavior “a sexual predator might do to woo a small suburban girl,” it’s apparent that she labors under no delusions of being an actual sexual predator. But the language she used? Well, it blurs the line. Aside from the obvious reference to sexual predators, the line about Grace not resisting is problematic at best, and grossly triggering at worst. She’s since apologized for her word choice, but it doesn’t make it OK.

As feminist author Luvvie Ajaye put it, “How was Lena allowed to print that? Where were the gatekeepers? The friends? The editors? How did no one in the process of book proposal to book writing to book editing to book publishing not say ‘hey [sic]. We should probably leave this part out?’ Was discernment busy? In the grand life of Lena Dunham, was finding pebbles in her sister’s Love Pocket so important that it just had to be in her memoir?”

To be clear, my issues with Dunham’s semantics aren’t intended to veer into the territory of joke policing. As Lindy West wrote last summer on Jezebel after getting into a debate with comedian Jim Norton on Totally Biased with W. Kamau Bell about comedy’s rape joke problem, “I don’t believe that previously non-raping audience members are going to take to the streets in a rape mob after hearing one rape joke. That’s an absurd and insulting mischaracterization. But I do believe that comedy’s current permissiveness around cavalier, cruel, victim-targeting rape jokes contributes to (that’s contributes—not causes) a culture of young men who don’t understand what it means to take this stuff seriously.”

In much the same way, it’s not that Dunham’s casual use of sexual predator is going to necessarily send other children into droves of sibling fondling, but it does make it much harder for victims of actual sibling sexual assault—a complex, and very real issue—to come forward without being worried that their accusations may be similarly dismissed as “childish exploration” rather than the potentially serious crime it actually may have been.

As the onslaught continued to unfold over the week, Dunham’s sister, Grace, waded into the fray to defend her sister on Twitter.

heteronormativity deems certain behaviours harmful, and others “normal”; the state and media are always invested in maintaining that

And she’s not wrong! The media, even left-leaning media, has a way of demonizing behaviors it deems outside of the spectrum of “normal” behavior. But a narrow worldview isn’t what’s working against Dunham in this case—it’s the casual way in which she threw around language usually reserved for criminal behavior to turn pages and sell books. Provocation may be Dunham’s brand, but by her own engineering, so is being an agent for social change. And trading on one, simply to engender the other? That’s where things get incredibly murky.

Dunham has long since made it part of her platform to champion feminism and left-leaning politics as part of her brand. She’s outspoken on Twitter about her unwavering commitment to organizations like Planned Parenthood, and she remains a champion of LGBTQ rights; hell, I can even argue that as insipid and color-blind as Girls may be at times, Dunham is staunchly dedicated to telling stories about wonderfully flawed women that aren’t just a size 2, cookie-cutter model, with a perfect career and love life.

She may not necessarily need to carry the mantle of social justice at all times, but as someone who has built quite a platform out of giving a voice to the marginalized. Dunham carved herself into a niche where frankly she should have known better, before referencing predatory sexual behavior in such a cavalier manner.

I can’t find fault in Dunham including the incident in her memoir. I may not have cared for the anecdote, but as someone who has written about the necessity of unlikable protagonists, I get the importance of sharing the uncomfortable and abnormal. However, just as important as context is in anecdotal retellings, so is gravity. Dressing up retellings of drunken nights, bad scripts, relationship mishaps gone awry? All par for the course. Approaching sexual assault with the same gravitas is not.