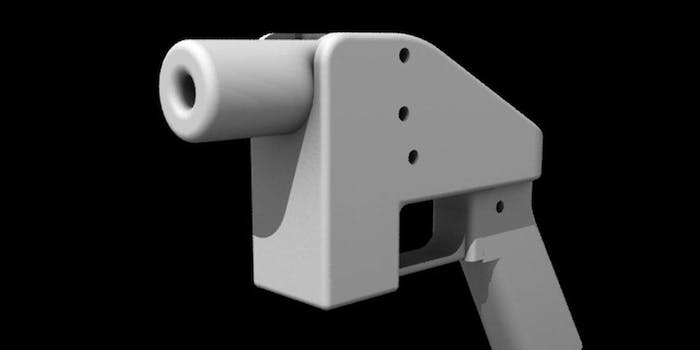 The technology could enable weapons to slip through metal detectors undetected, a leaked memo warns.

The U.S. government is starting to freak out about 3-D-printed guns. A May 21 memo circulated among state and federal law enforcement agencies, and obtained by Fox News, declares that the weapons may be “impossible” to stop—both from proliferating across U.S. households, and from passing unnoticed through security checkpoints.

“The only security procedure to catch [the 3-D firearms] is a pat down” a law enforcement official told Fox News. “Is America ready for pat-downs at every event?”

Plans for these so-called “wiki” weapons can be downloaded from the Internet and sent to a 3-D printer, which builds the component parts by building up a series of cross-sections using a plastic polymer. The only non-plastic part is a common nail; even bullets can be made with a 3-D printer.

Legislators at the federal and state level, including New York Senator Chuck Schumer, have proposed outlawing the 3-D weapons. But the memo, compiled by the Joint Regional Intelligence Center, forebodes a future where guns spread with the ease and speed of pirated movies:

Proposed legislation to ban 3D printing of weapons may deter, but cannot completely prevent their production. Even if the practice is prohibited by new legislation, online distribution of these digital files will be as difficult to control as any other illegally traded music, movie or software files.

That’s pretty much what Cody Wilson wants. The 25-year-old law student and second amendment advocate whose non-profit, Defense Distributed, has been at the forefront of the technology, has claimed he wants to make gun control impossible.

On May 6, Wilson and his crew successfully fired the first gun printed entirely from 3-D parts, a pistol they called The Liberator. It’s only non-plastic part was a single common nail.

The memo refers specifically to Defense Distributed and the Liberator, suggesting that weapons like it will enable anyone to slip past security.

Magnetometers may fail to detect the Liberator, depending on device sensitivity. Though it is prohibited by federal law, manufacturers may deliberately omit the unnecessary metal insert, leaving only a small nail and ammunition as the sole metal component. Future designs could further reduce or eliminate metal entirely. Unqualified gun seekers may be able to acquire or manufacture their own Liberators with no background checks.

Wilson wants to make gun control impossible. But as law enforcement officials warn of pat downs at every public event, one has to wonder: Will the real repercussions of his technology be to push us into the groping arms of an ever more invasive security state?