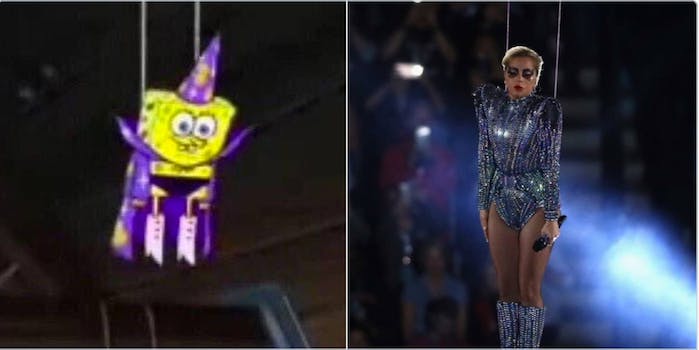 Who did it better, Lady Gaga or Spongebob?

It took only seconds after the conclusion of Lady Gaga’s halftime show at Super Bowl 51 for the internet to explode with new memes.

Many clever viewers took to Twitter to compare Gaga’s performance with Spongebob Squarepants, of course. Most compared her stunts with those performed by Spongebob during his Spongebob’s Goofy Goober Rock performance.

Similarly to Gaga, Spongebob flies around the Krusty Krab as he performs his anthem about how it’s cool to be a kid (and a goofball.) He’s also suspended from the ceiling.

“Spongebob has no impact” #SuperBowl pic.twitter.com/4OcmAxFr67

Along with Spongebob, Gaga’s halftime performance inspired other new memes, mostly referencing the moment she jumped into the NRG Stadium.

when you accidentally send the screenshot to the person you’re talking to #SuperBowl #ladygaga #PepsiHalftime #pepsihalftimeshow pic.twitter.com/TNenYwNuMX