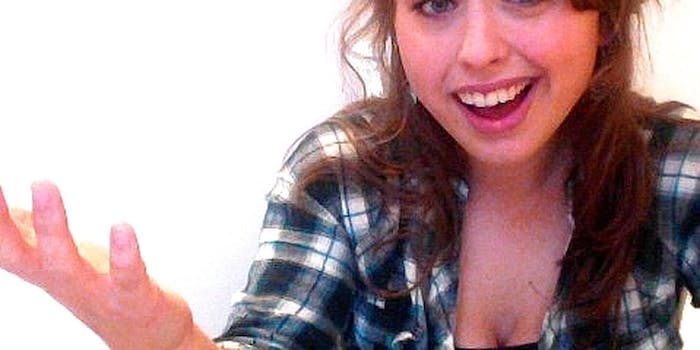 Laci Green's Sex+ series is officially on hiatus after she started receiving hate mail about an old video.

Nothing ever goes away on the Internet. Sex education vlogger Laci Green learned this the hard way, and trolls are forcing her into silence in order to teach her a lesson.

Beloved for her sex-positive Tumblr and weekly YouTube series, both aptly named Sex+, Green posted a farewell to followers Monday, below a piece of hate mail that included an aerial photo of her apartment building.

“i am going to be taking a break from tumblr. i’m not sure how long. i have been getting a slew of people (who i can only guess are from ‘social justice’ tumblr) telling me to kill myself, making violent threats, sending me my home address they somehow found. my inbox this morning was graced with pictures of my apartment building.”

In a text message, Green confirmed with the Daily Dot.

“Think I am going to take a break from youtube and all other mediums for the time being, but nothing permanent,” she said.

The trouble began Friday when Green received a message from Tumblr user doctorswithoutboners accusing her of transphobia:

“Hi Laci. Why do you use the word ‘tranny’ in your video about Haters from 2009? … You really shouldn’t be using that word as a cis girl and it’s really disappointing for the people who look up to you.”

Green conceded her mistake and apologized (emphasis her own):

“Probably because I was 18 and ignorant. You are totally right and I sincerely apologize for my mistake. Before I educated myself about trans issues I had not the slightest inkling of how the word is used to dehumanize nor its place in the cycle of violence against transfolk. Now I have seen people hurt by it and seen it used as a nasty slur. Words have power, and ‘tranny’ is not a word for anybody but transfolk themselves to use because only they can reclaim it. If I knew that was in a video, it would have been long long ago removed. Consider it banished forever.”

Green took down the video, but some Tumblr users apparently didn’t find this adequate, also citing an apparent opinion Green once made about sexism and Islam.

The blogger tweeted she’d spent the morning on the phone with police and was becoming deeply concerned for her safety.

“i’m trying not to freak out, but there’s this pit in my stomach like im gonna puke. sometimes i wonder if making videos is really worth it,” she wrote.

Green’s farewell post has elicited 3,000 notes from her fans, many deriding the militant “social justice” sector of Tumblr, whom they suspect to be behind the threats.

“Disgusting. She said something transphobic in a video at least 3 years ago. And when someone brought it to her attention, she apologized for it,” thegrumpus wrote.

“How do you [social justice bloggers] live with the overwhelming cognitive dissonance of labeling yourself as someone who fights for people’s rights while simultaneously being okay with harassing someone like this because they made a mistake,” hatewizard wrote.

It seems Green’s assailants aren’t interested in discussing their concerns. They just want to silence her.