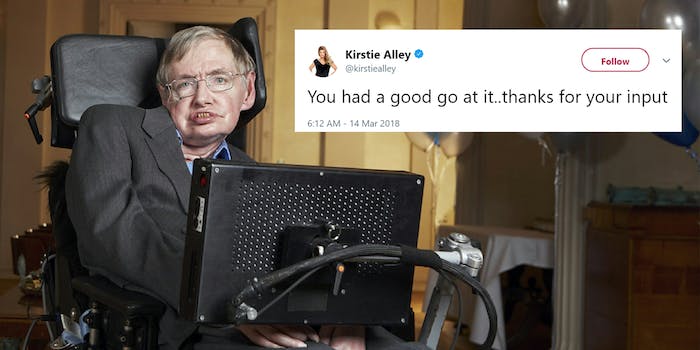 'Thanks for your input.'

Stephen Hawking’s death prompted Twitter reactions from many people in the science and tech communities, as well as celebrities. But actress (and Scientologist) Kirstie Alley wins for the weirdest (and possibly worse) response to finding out that someone—especially a brilliant physicist—has just died. On Wednesday morning, she tweeted a photo of Hawking along with the caption: “You had a good go at it..thanks for your input.”

“Thanks for your input”? Yes, that’s what she said.

It doesn’t seem like Alley’s tweet was intentionally mean—she later tweeted that Hawking was “one of the top 3 funniest people on the planet”—but the internet saw it differently.

Many thought the tweet was accidentally hilarious, while others saw it as a savage comment about someone who just passed away.

I've been thinking about it a lot and I'm pretty confident this is the funniest thing anyone has ever said about someone who just died https://t.co/JrbyrtzIF8

I can’t stop laughing at how stupid this is. https://t.co/4pdtQnmkhk

and we have a winner for "best stephen hawking obituary" https://t.co/iwutxC2j1P

Please put "thanks for your input" on my tombstone https://t.co/YJed3mhcaH

I have been staring at this tweet for 15 minutes straight, I understand nothing https://t.co/g6PmXEgBkX

Kirstie really said goodbye to Stephen Hawking like he was her summer intern? Wild. https://t.co/PHcyMohUxg

When I die please have Kirstie Alley do my eulogy https://t.co/FixFCWXsb7

All I want in my miserable fucking life is for Kristie Alley to write my eulogy https://t.co/HKioCCUuvG

I'm definitely getting Kirstie to write my epitaph https://t.co/dW0FCdeIP9

As for Alley, when she dies, she said she wishes to have her headstone read: “If you have the gas money I have the car.”

Although I will be cremated I want my headstone to read: If you have the gas money I have the car https://t.co/DDuFERFoHq