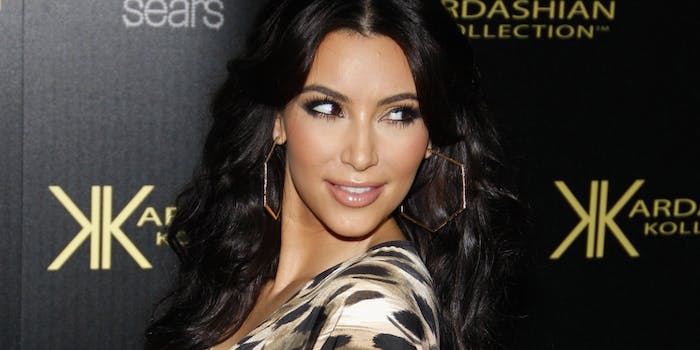 Dropping hints that it's pretty hilarious.

The iconic businesswoman has given us a lot to thank for: an amazingly comprehensive video game, child deity North West, and the receipts that exposed Taylor Swift for the snake that she is. And, of course, lots of people were introduced to the lives of the Kardashians through E! Network’s Keeping Up With The Kardashians.

We have to give it to Kim K. She’s strategically crafty when it comes to her public life, orchestrating subversive moments, as when she posts naked selfies—or manages to be around yet not involved in conflict between boo Kanye West and Amber Rose. The internet typically obsesses over her latest antics, but the latest Kardashian meme comes from a recently revisited scene in one of the family’s old reality shows.

January 2011 was a very different time for Kim Kardashian; it would be a while before she became serious with Kanye, let alone have his child. On Kourtney and Kim Take New York, Kim goes on a date while enjoying the single life. She explains in an on-camera interview that she’s dropping hints that she’s single. Producers then cut that into a scene of her on the date succinctly saying, “I’m single.”

Quite the hint, right? The humorous moment of course tore through Tumblr when it was originally posted in 2012 on a later deleted blog. But the GIFs and likes have been preserved, racking up over 535,000 notes.

It’s a GIF-set and moment in Kardashian history that most Tumblr lovers and fans will remember. And now, four years later, the scene is finally being memeified.

The framework is simple, with part of the closed captioning text altered to reflect some condition besides singlehood.

And, like anything on the internet, the meme has spiraled into the strange, overtly graphic, and highly specific. If anything, the detail really adds to the moment. Many of these memes really encapsulate the thirst that runs rampant through Tumblr.

In more recent takes, Kim actually transforms into someone else. The meme has also been repurposed to involve other memorable pop culture moments or properties.

Even a speechless Kim works.