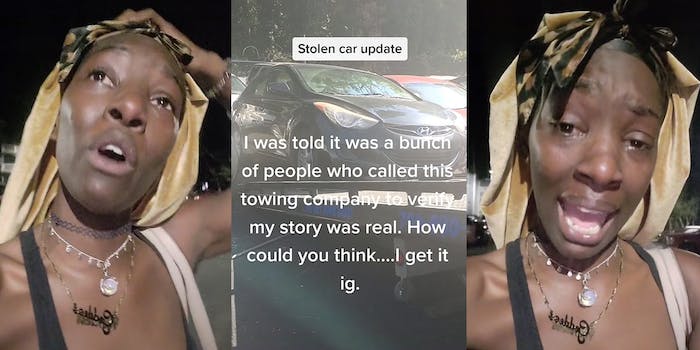 ‘Why is that even a trend’: Woman’s viral TikTok about stolen Hyundai highlights the ‘Kia boyz’ challenge

A woman’s viral TikTok about her car being stolen may be tied to a bigger trend of hotwiring certain Kia and Hyundai models.

Earlier this week, user Kitty (@ssacred_rebel) posted a TikTok detailing how her Hyundai was stolen from the parking lot of her apartment complex in Charlotte, North Carolina, and abandoned after a maintenance man allegedly chased four men away.

“My ignition was torn apart,” she says, obviously distraught. “There are two flat tires, and now my car is in the fucking tow yard.” Her video has garnered over 10 million views since it was shared Tuesday.

Kitty posted an update Thursday from the tow yard, noting that she is having to foot the bill for the tow. We reached out to the creator for comment via Instagram DM.

In the TikTok comments, several people reference “Kia boyz,” a name attached to thieves who’ve reportedly been targeting late-model Kias and Hyundais that don’t have push-to-start ignition, according to Auto Blog.

This trend exploded last year in Milwaukee, with Kia models made in 2011 or later, and Hyundais made in 2015 or later, reportedly being the prime targets. Thieves allegedly use USB cables or screwdrivers to jump-start the ignition, after peeling back the steering column.

In the comments of her original TikTok, Kitty says 60 cars were reported stolen in the last week in Charlotte. There have also been reports of Kia and Hyundai thefts in Ohio, Michigan, Nebraska, Texas, and Florida.

The trend comes from the thieves filming themselves stealing and joyriding. Plenty of evidence and tutorials have been posted to TikTok and Instagram, and victims have documented the aftermath as well.

The trend has also had tragic consequences, in which people were killed or injured.

A search for “Kia Boyz” or “Kia Boys” on TikTok doesn’t bring up any hashtags, but you can still find content. Some of the videos have a safety warning on them. We’ve reached out to TikTok for comment via email.

In a statement, Kia says it’s “aware of the rise in vehicle thefts of a subset of trim levels. All 2022 models and trims have an immobilizer applied either at the beginning of the year or as a running change.”

Similarly, a Hyundai representative told the Daily Dot via email that the company “is concerned with the rise in local auto thefts. The safety and well-being of our customers and the community is and will remain our top priority.”

Update 7:25am CT, Aug. 9: In a statement, a TikTok spokesperson said the platform “does not condone this behavior, which categorically violates our policies and will be removed if found on our platform.”