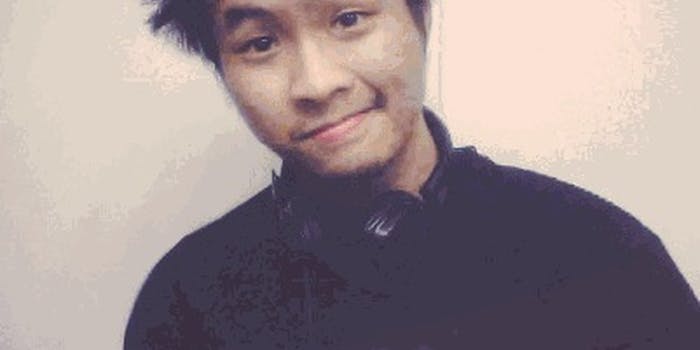 Khoa Phan tells complete stories in 6 seconds, using nothing but construction paper. And he always ends by telling you to have a nice day.

All the creativity in the world can’t account for a sticky finger.

Creating a slick stop-motion Vine without any mistakes is a difficult prospect. One finger slip can ruin an hour of hard work. Khoa Phan‘s Vines, however, are smoother than a freshly oiled bowling lane.

Phan typically uses construction paper to craft his stop-motion videos, telling complete stories in just six seconds: Mario grabbing a mushroom, floating into space, or getting stuck with a stick of dynamite. There’s a lot of charm and positivity infused into his must-follow Vines, and they rarely fail to raise a smile.

Phan, who celebrated turning 23 last month with a Vine, runs a vehicle-exporting business. It’s perhaps his side gig as creative support for storyboarding that’s helped him create such terrific vines.

He opted for construction paper since he had some on hand, and it’s “very easy to manipulate, and easy to reuse.” Phan tries to reuse paper in multiple vines when possible.

It typically takes Phan between 30 minutes and an hour to create one of his clips. One took over two hours to put together, due to some issues with Twitter’s video-sharing app. He keeps track of ideas in a sketchbook, and tries to lay out how he wants to shoot each clip before starting. In videos in which he appears, he sometimes asks a friend to tap his iPhone screen for each shot.

Phan considers his vines to be “pretty personal.” His positivity shines through in his videos, many of which end with a message reading “have a good day” or “have a nice day.”

“I am a very positive person. The message “Have a nice day!” became a thing when I did other animation. It just became my sort of trademark saying now in animation and carried onto Vine. My thoughts are, if I can [be] positive I hope to help someone’s day a bit better with it; hence why I wish everyone a good day. There’s so much going on in the world, so I try to stay upbeat when times are hard.”

His videos have led to Alyssa Milano becoming one of his more than 9,500 followers, while one of his vines landed in the Editor’s Pick section of the app.

As far as other viners go, Phan enjoys the work of Nick Confalone, fellow stop-motion artist Pinot, and Ian Padgham.

That said, none have anywhere close to the same level of whimsical charm that Phan brings to the community. His videos invoke a sense of joy that you don’t get from other Web communities. His passion for creating the fun clips shines through, and Vine is far better for his talent and videos.

Have a good day, Khoa.