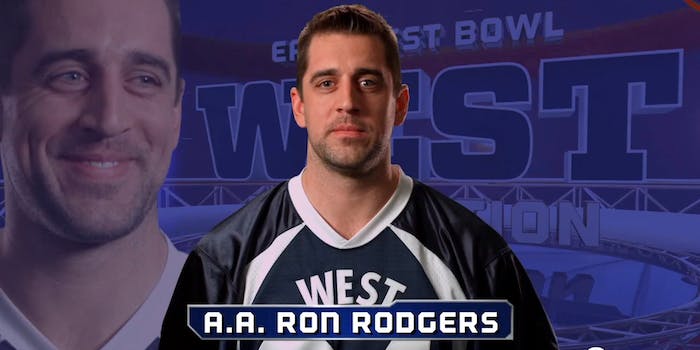 Key & Peele are back with another East West Bowl, and this time they brought along the pros.

Keegan-Michael Key and Jordan Peele are back with their third edition of the East West Bowl. The sketches, which air on their Comedy Central show Key & Peele, make fun of the ridiculous names that often accompany football players. While the first two editions of the East West Bowl centered around college football, this time as part of Key & Peele’s Super Bowl special, the duo enlists the help of some real-life NFL stars.

Key & Peele play most of the hilarious characters like Legume Duprix, Marmadune Shazbot, and Swordless Mimetown, but some NFL stars like Leger Douzable, Ishmaa’ily Kitchen, and Ha Ha Clinton-Dix join in on the fun and appear as themselves. The highlight of the clip is probably the cameo by Green Bay’s own Super Bowl-winning quarterback A.A. Ron Rodgers (pronounced Rod-Gers.)

Check out the first two editions of the East West Bowl below but after the pro edition featured real-life players like D’Brickashaw Ferguson, the rest of the names may just seem normal.