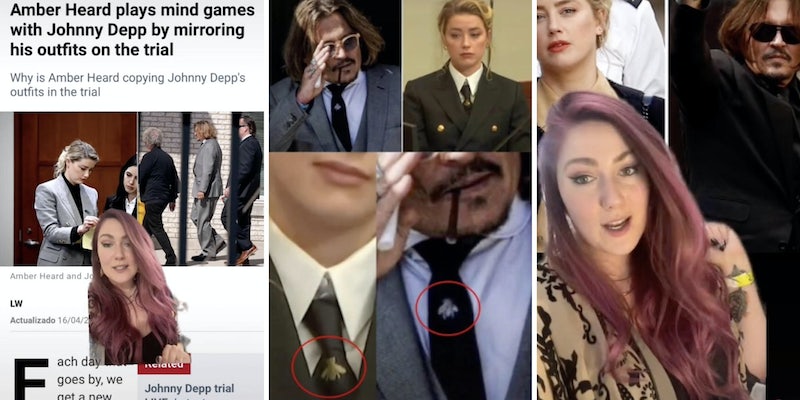 Depp is suing Heard for defamation around a 2018 op-ed.

Johnny Depp’s defamation trial against his ex-wife, the actor Amber Heard, is underway in a Virginia courtroom. And while proceedings over the trial, which is attempting to determine if a 2018 Washington Post op-ed written by Heard defamed Depp, are still underway, every aspect of the trial is being scrutinized.

Part of that comes from everything Depp says as he takes the stand in this part of the trial, but it also extends to facial expressions and what each of them is wearing. For some of Depp’s fans, the latter indicates that there’s something deliberate about the courtroom attire, at least one from one-half of the ex-spouses.

Several TikTokers used footage and photos of the trial (which is airing on CourtTV) to compare what Depp is wearing on a particular court date while showing what Heard is wearing on another court date. The insinuation from those TikToks (some of which have been viewed millions of times) is that Heard is copying Depp’s outfits.

On one day of the trial, Heard wore a gray suit, which TikTokers claimed was similar to a gray suit that Depp wore at the end of his defamation case in the U.K. (Depp sued British tabloid The Sun after it labeled Depp a “wife-beater,” and a judge ruled in The Sun’s favor in November 2020 because he found the description to be “substantially true.”) While some of the videos claimed it happened on the first day of the trial on April 11, Getty photos from that day show Heard in a pinstripe suit, although she is wearing a gray suit on April 12.

Depp wore a Gucci tie with a bumblebee on it on the first day of the trial. Days later, Heard is seen wearing a similar tie on April 13.

Some people also pointed to Heard sporting a high ponytail soon after Depp wore his hair in a ponytail. (Depp’s hair went up on April 18 while Heard, whose hair has largely been in updos throughout the trial, wore a full ponytail on April 19.

Many of the TikToks comparing Depp’s courtroom outfits and Heard’s noted the irony in Heard allegedly copying Depp’s style after Depp’s sister Christi Dembrowski testified that Heard once criticized Depp for not having any style.

“Johnny told Amber that I had just had a meeting with Dior and they were interested in him,” Dembrowski said in her testimony. “Her reaction to that was she was in disbelief and sort of disgust because she said, ‘Dior, why would Dior want to do business with you? They are about class and they are about style and you don’t have style.’ It was insulting. Taking away that one moment, that insult is there.”

The theory also spread on Twitter, where Depp fans used Heard’s outfits to argue against her.

“So… Amber Heard showed up to court copying Johnny Depp’s (distinctive) tie from the previous day’s session,” @combat_riceball wrote. “That honestly gave me chills. Deep in my gut.”

The defamation trial against Heard is set to continue for at least a month.