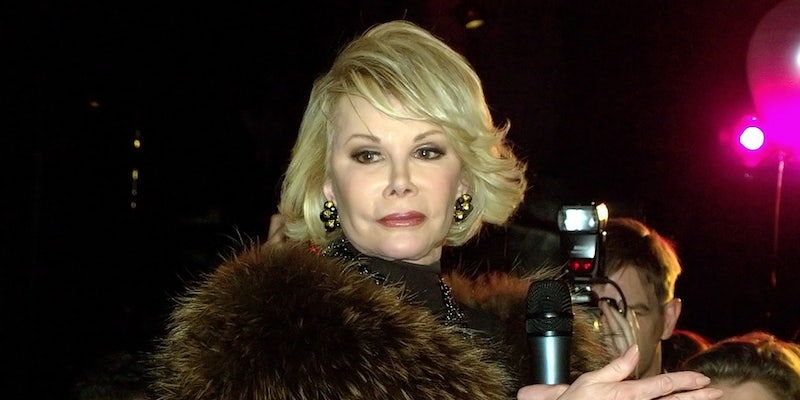 The doctor allegedly took the selfie before performing an unauthorized biopsy.

Joan Rivers‘s doctor allegedly took a selfie in the procedure room before performing an unscheduled biopsy on her vocal cords, a source close to the investigation told CNN.

Rivers was at Manhattan’s Yorkville Endoscopy clinic for a scheduled procedure on Aug. 29 to find out why her voice was hoarse and her throat was sore, which was performed by her gastroenterologist, Dr. Lawrence Cohen.

Once the procedure was finished, the biopsy, which Rivers did not give prior consent for, was performed by a different doctor—her ear, nose, and throat specialist, who wasn’t identified. This doctor wasn’t certified to perform the procedure at that hospital, and, according to a staff member at the clinic who passed the information along to investigators, she took a selfie while Rivers was under anesthesia on the table.

During the alleged biopsy, it’s believed that Rivers’s vocal cords swelled up and cut the flow of oxygen and led to the cardiac arrest that sent her to Mount Sinai Hospital in New York, where she died a week later.

Yorkville Endoscopy denied reports that a vocal cord biopsy was ever performed at the clinic, but it later confirmed that Dr. Cohen “is not currently performing procedures … nor is he currently serving as medical director.” Neither doctor has been accused of wrongdoing by investigators.

The clinic refused to answer any questions about Rivers’s procedure or the claim that the doctor took a selfie, citing federal privacy laws.