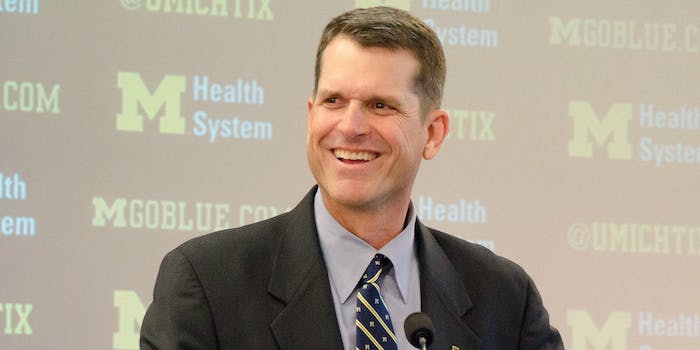 The power struggle inside the San Francisco 49ers, which led to the firing of coach Jim Harbaugh, was one of the strangest—and probably stupidest—storylines of the entire 2014 NFL season.

Harbaugh had led the 49ers to a 44-19-1 record and a Super Bowl appearance in four seasons, but the team handed the reins to little-known Jim Tomsula prior to the 2015 season. Tomsula subsequently turned in a record of 5-11 (Harbaugh went 13-3, 11-4-1, and 12-4 in his first three seasons). On Sunday night, the 49ers basically admitted their mistake and fired Tomsula after only one year at the helm.

Presenting the most egregious subtweet of 2016 so far.

Do not be deceived. You will reap what you sow.

Harbaugh is now the coach at the University of Michigan, and he just took the Wolverines to a 10-3 record and a Citrus Bowl victory. But he clearly hasn’t forgotten about how his San Francisco tenure ended. Though the team at the time called it a mutual parting of ways, Harbaugh—who, despite his team’s success, rankled players and the front office with his single-mindedness and intensity—later revealed that it wasn’t his choice to leave.

“I was told I wouldn’t be the coach anymore,” Harbaugh said last February. “And then … you can call it ‘mutual,’ I mean, I wasn’t going to put the 49ers in the position to have a coach that they didn’t want anymore. … But that’s the truth of it. I didn’t leave the 49ers. I felt like the 49er hierarchy left me.”

The only thing that would have made Harbaugh’s subtweet better? If Screech from Saved By the Bell were around to chime in on the latest news.

@allenri1 Wonder if Screech and Jim still hang out? Jim Harbaugh Appears on Sitcom (1994) Saved By The Bell http://t.co/RK9NluX4kA

Photo via Brad Muckenthaler/Flickr (CC BY 2.0)