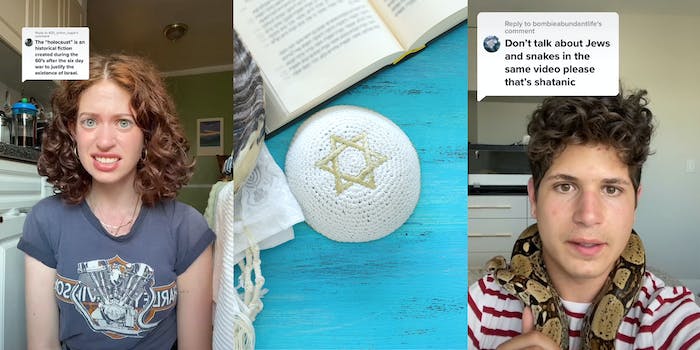 ‘The scariest part is there are a lot more people that think the same thing’: Jewish TikTokers showcase antisemitism on the video-sharing platform

'The scariest part is there are a lot more people that think the same thing.'

Two Jewish TikTokers show the hateful comments they receive on their videos, showcasing the rampant Holocaust denial conspiracy and antisemitism on the platform.

In a video posted by TikToker Max (@max_rlmao) on June 21, he responds to an antisemitic comment from a video in which he shows off his pet snake that reads, “Don’t talk about Jews and snakes in the same video please that shatanic.”

“I’m literally just Jewish and tried to show my snake at the end of the video,” Max says in the clip. “We also don’t even believe in Satan.”

Max’s video has amassed over 102,000 views, with users putting the commenter on blast.

“How much does everyone bet this is a non jewish person- I’m ethnically jewish and don’t comment this shit unless we are directly called a reptile,” one user said.

“How dare you be Jewish and have interests,” another joked.

“Now the Christian’s are going after Jews wtf,” a third added.

In another video posted on July 3, TikToker Jenny (@permanentefficacyofgrace) reacts to a comment that reads, “The ‘holocaust’ is an historical fiction created during the 60’s after the six day war to justify the existence of Israel.”

Her response video has amassed over 92,000 views, with commenters discussing how widespread the Holocaust denial conspiracy is becoming.

“The scariest part is there are a lot more people that think the same thing,” one user wrote.

“When I see stuff like this, I just wonder how many people I encounter in a day that believe it,” another said.

“The existence of deniers always fades to the back of my mind until a visceral reminder, holy shit,” a third added.

In a follow-up video, Jenny calls out commenters on her response video that accuse her of giving alt-right conspiracists a platform.

“The comments section on that video is full of people who are like, ‘Oh my fucking god, I can’t believe people actually believe that.’ First off, lucky them,” Jenny says. “And if you’re on TikTok and you’re going to fall down the alt-right pipeline, you’re not going to get to it from a leftist, Jewish girl.”

The Daily Dot reached out to Max and Jenny via TikTok comment.