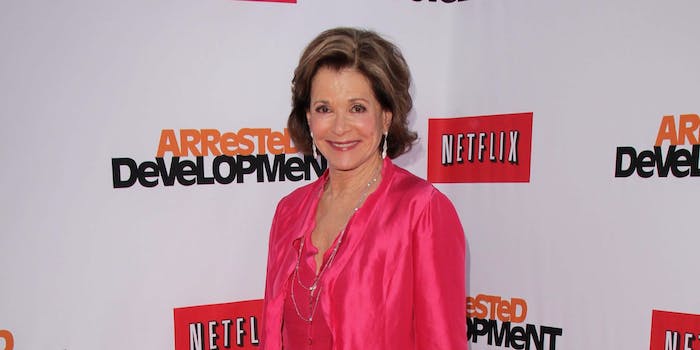 She died on Wednesday at age 80.

Jessica Walter, whose legendary career spans decades, died at her home in New York on Wednesday. She was 80.

According to Deadline, which first broke the story of Walter’s death, the actress died in her sleep.

“It is with a heavy heart that I confirm the passing of my beloved mom Jessica,” Brooke Bowman, Walter’s daughter and Fox Entertainment’s senior VP of drama programming, said in a statement. “A working actor for over six decades, her greatest pleasure was bringing joy to others through her storytelling both on screen and off. While her legacy will live on through her body of work, she will also be remembered by many for her wit, class and overall joie de vivre.”

Walter’s career spanned decades and across TV, film, and the theater, and her filmography includes hundreds of roles. She voiced Fran Sinclair in Dinosaurs, had a recurring role in appeared in the 90210 reboot, and even appeared as Morgan le Fay in a 1978 Dr. Strange TV movie. Her lone Emmy came in 1975 for the short-lived series Amy Prentiss.

But for many fans of Walter’s wit, biting humor, deadly jabs, and piercing glares, the two roles that would define Walter’s career came later in life. She starred as the completely out-of-touch matriarch Lucille Bluth in Arrested Development for five seasons and voiced Malory Archer, who snarked and drank her way through heading an intelligence agency (and was a kind of extension of Lucille Bluth), for 10 seasons on Archer.

With pitch-perfect delivery, Walter delivered iconic line after iconic line, enough that if you asked someone to pick just one, you’d get several. Lucille Bluth was a character who made the phrase “Star War” just as normal a way to refer to Star Wars, who requested toast with her order of vodka rocks, and who refused to accept any form of criticism.

In recent years, Lucille Bluth, in particular, has emerged as an encapsulation of out-of-touch American politicians who have little-to-no understanding of how much money Americans need to sustain themselves.