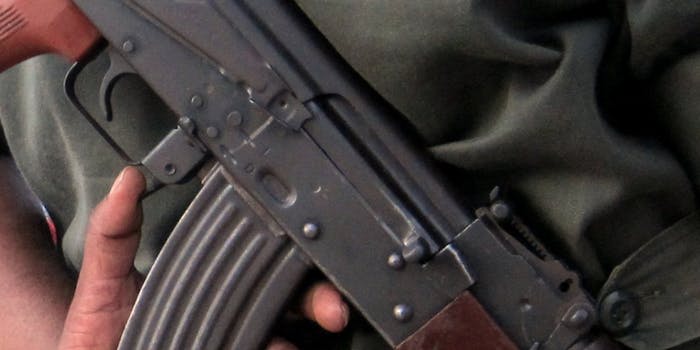 Terrorism is terrorism, regardless of skin color or religion.

If you’ve been following the news about the recent mass shooting in San Bernardino, California, you’ve probably heard the names of suspects Syed Farook and Tashfeen Malik. And given the way their names sound, you may also be tempted to jump to conclusions about their motives.

As our nation mourns in the wake of so many mass shootings in recent years that it’s hard to keep up, speculation has run rampant about both the suspects in the San Bernardino shooting, and about the suspect in last week’s Planned Parenthood shooting, Robert Lewis Dear. Both incidents feel connected to other nationwide and global controversies, such as the outcry over defunding Planned Parenthood, and the attacks in Paris by Islamic extremists.

But in the swirl of rhetoric surrounding both these tragedies, there’s one thing we must keep in mind: All these shooters are terrorists. To that end, we must rethink what comes to mind when we hear this term.

A report from the Southern Policy Law Center has found that “lone wolf” domestic terrorism is on the rise, and that violence from extremists who act in parties of one or two, serving a “leaderless resistance,” may be the biggest terror threat to U.S. soil. “While jihadism is a deadly serious concern, the report shows that authorities should not focus on it to the exclusion of other threats,” the report says. It continues:

“A timeline included with the report details a lengthy list of deadly attacks and plots across the country. They include a 2014 rampage in Nevada by a husband and wife with anti-government views that left two police officers and another man dead, a 2012 attack on a Wisconsin Sikh temple by a long-time neo-Nazi that killed six victims, and a 2010 attack that left an Internal Revenue Service (IRS) manager dead after a man who had attended radical anti-tax group meetings crashed his single-engine plane into an IRS office in Austin, Texas.”

Consider that many of the most prominent terrorists of the last few decades have been these type of loners– mostly white men, seemingly bearing no resemblance to the Middle Eastern faces we typically conjure up when terrorism comes to mind. And what they had in common was not religious extremism, but anger based on another set of beliefs. Timothy McVeigh, of the Oklahoma City bombing was angry at the government. Wade Michael Page, of the Wisconsin Sikh temple shooting, was angry at Muslims. Elliot Rodger, of last year’s Santa Barbara shootings, was angry at women. Dylan Roof, of the Charleston shootings, was angry at black people.

In the swirl of rhetoric surrounding both these tragedies, there’s one thing we must keep in mind: All these shooters are terrorists.

Meanwhile, as more information about Farook and Malik pour in, it’s starting to appear as if they fit into a familiar context. Reports say Farook was “radicalized” after communication with several internationally suspected terrorists. But before we fall back on old stereotypes entirely, it’s important to look at the wave of Islamophobic protests in the U.S. and abroad that have occurred in the tragic aftermath of Paris. These protests have happened despite the solidarity expressed by many Muslims around the world decrying the horrors the city went through. The outcry over Syrian refugees too, and whether they should be allowed to enter this country, has also contributed to this latest round of Islamophobia. Some have gone as far as to suggest that we only let Christian refugees into this country, which, ironically, happens to be an incredibly un-Christian stance.

It’s telling that the same politicians calling for caution on this issue have also been put in an awkward position when it comes to last week’s shootings. Mike Huckabee, of all people, who has been a constant detractor of Planned Parenthood, had the good sense to declare the shooting in Colorado Springs an act of “domestic terrorism.” But not all of his colleagues have had the same sense.

“Marco Rubio, who seized on the shooting of Cecil the Lion as a reason to ask where the outrage was over Planned Parenthood and “dead babies,” didn’t have anything to say about the victims in Colorado,” notes The New Yorker’s Amy Davidson. “Ben Carson, asked about the heated words leading up to the shooting, spread the blame to supporters of reproductive rights… Then he somehow connected that thought to the Islamic State.” Donald Trump, meanwhile, fell back on the old scapegoat that Dear was “mentally disturbed.” “This is so typical of the left to immediately begin demonizing the messenger because they don’t agree with your message,” said Carly Fiorina, who made a particularly good showing at a recent Republican debate, thanks to her demonizing of Planned Parenthood. “

It’s clear that those on the right don’t want Dear tied to their larger movement. But one has to wonder, what would happen if we called every white guy involved in a mass shooting a terrorist? Exploring this very idea, The Daily Show’s Jordan Klepper “spoke out” for white Christian men, imploring:

“America, these are frightening times. We’re all understandably on edge. But is at these very moments that we must remember our nation’s core moments. And that’s why I say to you, please, don’t discriminate against white men. I get it. Most mass shootings in America are done by white, Christian-looking dudes. But the vast majority of white guys are peaceful bros, who want to live quiet lives in America.”

The question is, if we are to stand outside of mosques in protest in the wake attacks by Muslims, should we not also rally in front of churches in the wake of the Planned Parenthood shooting? Terrorism is terrorism, regardless of skin color or religion.

It’s doubtful that anyone will have a hard time labeling Farook and Malik as terrorists. We had no problem labeling an individual like Mohammad Youssuf Abdulazeez, of the Chattanooga military shootings as a “violent extremist.” We had no problem calling someone like Dzhokhar Tsarnaev, of the Boston bombing a terrorist. So why isn’t the same label applied to people without dark skin, who do not practice Islam?

Labeling white mass shooters as “crazy” distracts from the point. Mass shooters rarely act just because they are crazy. They act because they believe in something. And whether they are fueled by religion or anything else, the end result is no different. It isn’t as if we’re going to forget about ISIS and jihadist fearmongers by doing so– that kind of terrorist is obviously still out there. But the truth is that in America, we’re far more likely to be affected by the actions of domestic terrorists, and domestic terrorists kill for a myriad of reasons. The Paris attacks might have happened on a much, much grander scale, but at its core, the hate in Robert Lewis Dear’s heart is the same hate that fueled the destruction in Paris, and the same hate that fueled Syed Farook and Tashfeen Malik.

They are all terrorists, and they all deserve the label.