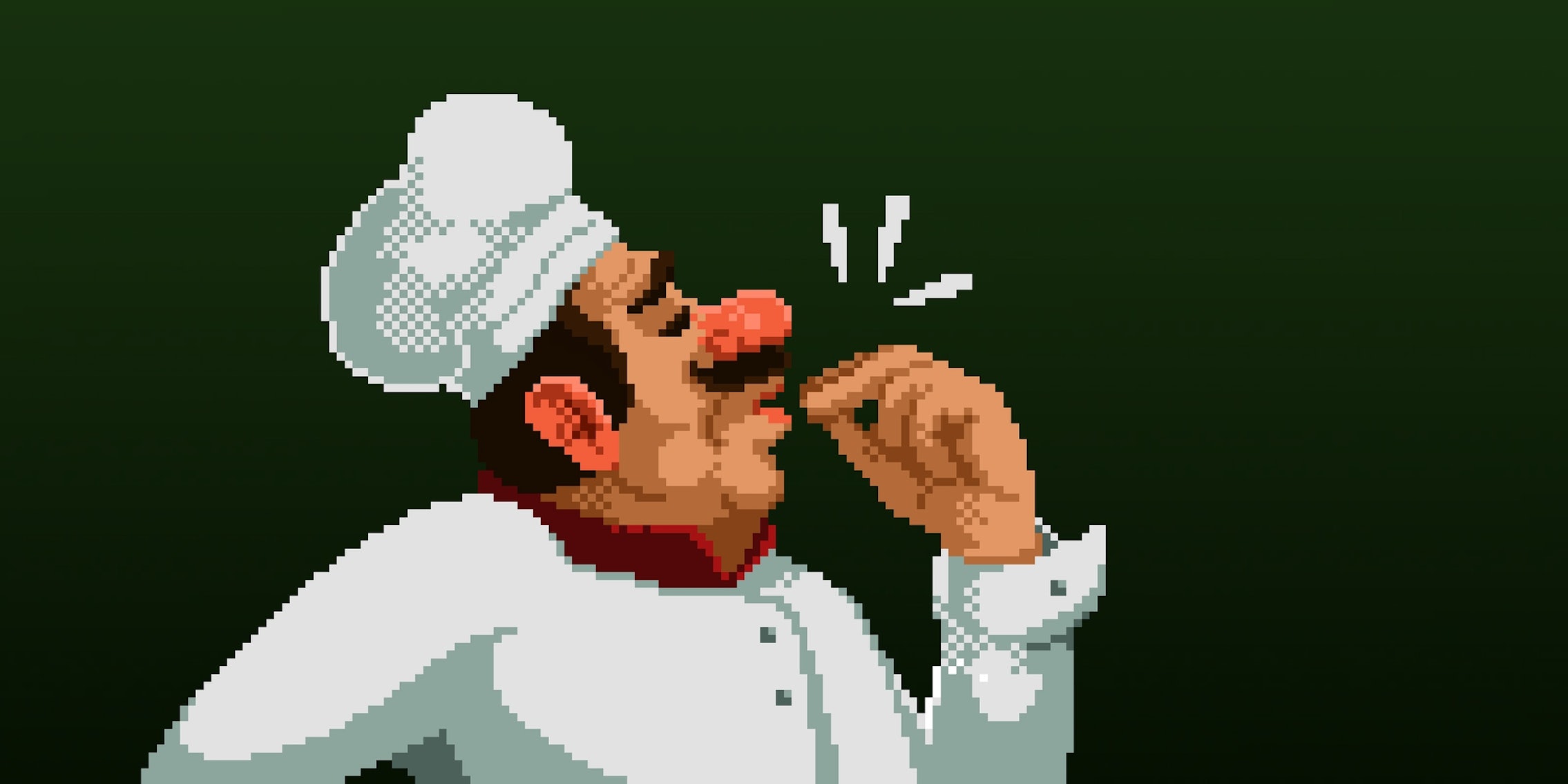 The reigning cliché used to describe something Extremely Good online is the image of the Italian chef bringing his thumb and forefinger together, kissing them, and separating them again. “This is perfection,” the gesture says—sometimes sarcastically. “It is like a good pasta sauce. It could not be any more Good.”

The “chef kiss” is the standard online reaction to any #content with such strong pleasing or horrifying characteristics that it is delicious. It could be a legitimately funny news headline, or it could be the absolute mess of bad politics, internet harassment, racism, and dead celebrities that is the year two-thousand-sixteen.

i love the lengths that gawker blogs are taking to burn everything down. it’s perfect chef kiss pic.twitter.com/xgtEAUtaSw

Zap Brannigan reading Trump quotes is the best thing ever. Under lines the inanity and pomposity perfectly. *Chef kiss*

I highly recommend being 15 and seeing this in a movie theater with your parents. <Italian chef finger-kiss emoji> https://t.co/XgqFo0lV63

when it comes to small groups, i’m like an italian chef whose latest dish is delicious, and i kiss my fingers because of it

The *chef kiss* can also be applied to actual food, but that’s not as common.

@TSSteinbacher next time, sprinkle abt a tsp of sugar on that bad boy before you heat it. *chef finger kiss*

How did the chef kiss come to be the unofficial seal of approval for good shit online and also the sarcastic repudiator of bad shit? The Wikipedia contributor/Vox explainer answer is that the kiss originated as an actual Italian hand gesture used to signify “al bacio,” meaning “delicious” or, more literally, “as good as a kiss.”

This real thing, done by real people, has become central to the “wacky” ethnic caricature of the Italian chef as portrayed on American pizza boxes and pasta sauce labels. There’s even academic literature about how U.S. chain restaurants have achieved the “goal of commodifying the Italian ethnic identity and promoting its symbolic consumption.”

The caricature of the hand-kissing chef may have started in the U.S., but it’s now a global phenomenon. In a paper on food and culture in Australian women’s magazines of the 1960s, Susan Sheridan describes the chef’s emergence in Kraft’s global marketing after World War II:

American companies such as Kraft had been established here for decades, but in the post-war years some of their staples were “ethnicised.” For instance, building on its long-popular tinned spaghetti in tomato sauce, Kraft took the risk of making it more ‘authentic’ by inventing a cartoon mustachioed chef, recognizably ‘Italian,’  [emphasis added] to sell new lines like ravioli and spaghetti dinners, which included separate packets of sauce mix and parmesan to go with the pasta.

(Chef Boyardee, on the other hand, was a real guy—a chef named Ettore Boiardi, who changed his name to “Hector Boyardee” and became a pioneer of what we now call “personal brands.”)

In 1975, Jim Henson’s Muppets introduced the character perhaps most associated with the internet’s version of the Chef Kiss: the Swedish Chef. You’ve almost certainly encountered this photo used in place of the words “*chef kiss*.” Isn’t it a little bit strange, though?

The Swedish Chef was created as a spoof of television chefs of the time, but none of the most likely targets of the parody were Italian. One was German and one was, predictably, Swedish. The Chef is known for flailing wildly and saying “bork bork bork,” not for this kiss gesture. And in the movies, you see the puppeteer’s hands, not puppet ones. That’s how the Chef is able to hold kitchen utensils.

It turns out this image is a source of controversy among serious Muppetheads. It appears to be what’s called a “poser”—not a real Muppet designed for a puppeteer, but a full-body doll created to pose for promotional photos. These can be good or bad: Muppets fans discuss their most-loved posers on forums, but they also discuss the ones they hate. The worst offender is a dark Kermit, a slightly “off” poser with a flat head that freaks out real fans. The Swedish Chef poser—the one doing the chef kiss—is also among the most-loathed.

Disney, I implore you to lock the posers in a closet for a few years and bulk up the supply of photos taken with the real Muppet puppets. Take LOTS of them. For every piece of merchandise that comes out with a “peeking over gaudy sunglasses” Piggy, “Home Alone” posed Fozzie, “kissing fingers” Swedish Chef [emphasis added] or group shot of Muppets waving to camera that debuted at MuppetFest, you should be forced to scream “WARNER BROTHERS RULE!” at the top of your lungs through megaphones in the nation’s busiest streets.

One regular poster on the Muppet Central forums was even harsher, writing, “It’s time to take this horse to the back of the barn. Face it. It’s the single most overused stock Muppet poser photo out there.”

Despite the hatred from fans, the chef has appeared on a number of licensed Muppet products. Here he is on the side of a Hot Wheels toy van: 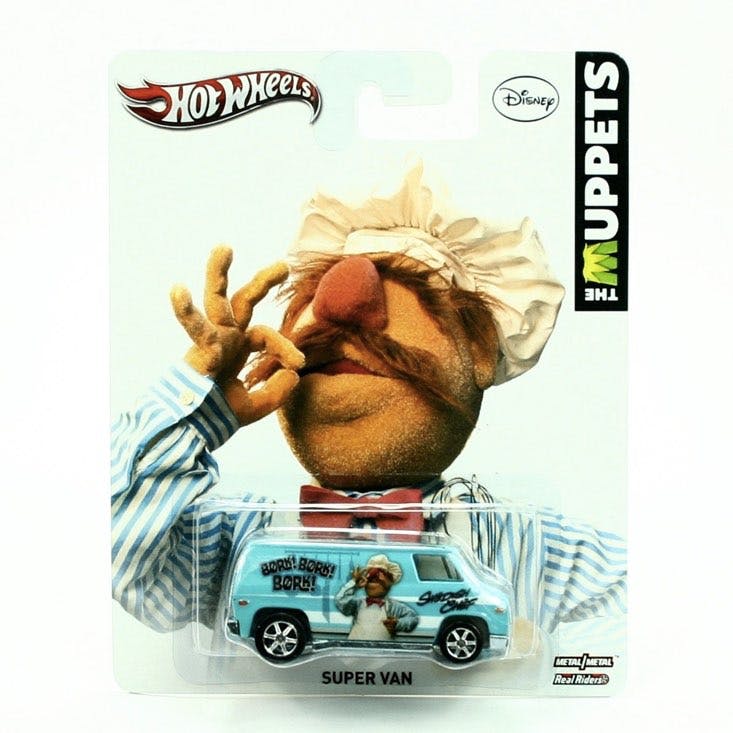 And, of course, the chef photo is all over Twitter, Reddit, and various image-sharing sites. (It should be noted, however, that some of his popularity comes from the fact that he looks like he’s smoking an invisible joint, not from the typical usage as a “perfetto!” chef kiss.)

The other major icon in the realm of chefs and finger-kissing online is Discourse Chef: Mmm, that’s-a some good discourse! This guy is usually used in the ironic sense of the chef kiss, because “The Discourse” is primarily a term for labeling and describing very bad online discussions—a way of holding them up as discrete things to be studied, mocked, or ignored. It’s especially prevalent on Tumblr, where a poster called Ladygolem first introduced Discourse Chef in 2015.

“As far as I can tell, memetic usage of ‘The Discourse’ to refer to particularly bad tumblr arguments started April 1, 2015 with natawhat’s post that captioned a screenshot ‘The Discourse’ as if it were a piece of art,” explains the meme-centric Tumblr memearchives.

Cartoonist Matt Lubchansky (who, full disclosure, has contributed work to the Daily Dot) drew his own popular, animated variation on the Discourse Chef and posted it on Twitter this past March.

His caption, “Good arguments, in good faith. Always. That’s the Online Promise™,” is pretty much the platonic usage of a sarcastic chef kiss. In case you haven’t spent much time on Twitter, I am here to tell you that “good-faith arguments” are not the number one thing for which it is known. (That would be harassment.)

Another, more current way to represent the chef kiss is in emoji. If you need to communicate to a teenager in 2013 how perfectly good or bad something is, these are your weapons of choice:

this is the new chef kiss emoji for meme usage. please tell tumbler 😩👌

There’s some debate about which face should go next to the “OK sign” emoji. The sad face does communicate the stereotypical “spicy meat-a-ball”-ness of the chef kiss, but the whistling emoji looks more like an actual kiss.

Until Apple blesses us with a single chef kiss icon, use whichever combo you prefer. Even the literal kiss emoji is acceptable.