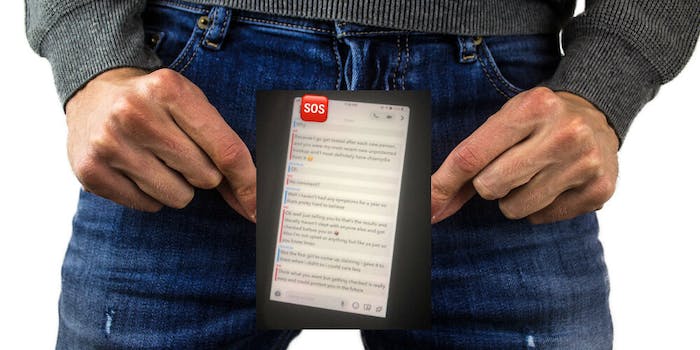 'You're not the first girl to come up claiming I gave it to them when I didn't, so I could care less.'

A screenshot of a Snapchat exchange between a man and a woman who says he gave her a sexually transmitted disease (STD) has gone viral.

In the messages, posted to the “trashy” subreddit, a woman explains to a man named “Josh” that she gets tested after “each new person.” She further explains that he was her last unprotected hookup, and she now has chlamydia, meaning he’s the only one who could have given it to her.

He responded with a simple, “Oh,” to which she asked, “No comment?”

“Well I haven’t had any symptoms for a year so thats pretty hard to believe,” he wrote.

Redditors pointed out that chlamydia is usually asymptomatic, meaning that people who do have it may not exhibit any physical symptoms.

“Ok well just telling you bc that’s the results and literally haven’t slept with anyone else and got checked before you so,” the woman wrote in response to Josh. “Also I’m not upset or anything but like ya just you know lmao.”

He then admitted that other women have also told him he exposed them to chlamydia.

“Not the first girl to come up claiming i gave it to them when i didnt so i could care less,” he wrote.

She then urged Josh to get tested.

“Think what you want but getting checked is really easy and could protect you in the future,” she wrote in the last visible message in the screenshot.

People were baffled by the apparent lack of sex education Josh exhibited.

“Chlamydia often shows no symptoms and is easily treated and cured so either way this guy is an idiot,” one redditor wrote.

Others are applauding the woman for the way she navigated the situation.

“She’s handling that pretty well. Especially after that last comment,” another wrote.

Hopefully, the man heeds the advice of the redditors and the woman, who is literally only trying to help him and his future sexual partners out.