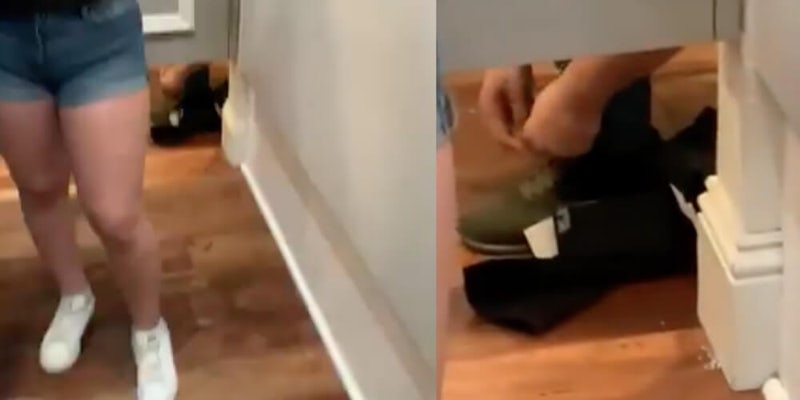 He pretended to tie his shoe in order to record her.

A woman shared a video of a man who was seemingly pretending to tie his shoe in order to record her while she was in a dressing room at Forever 21.

The woman, who goes the Twitter handle @issyr_, shared the video on Thursday and said the incident took place at Baybrook Mall in Friendswood, Texas.

The six-second-long video shows the woman recording through the reflection on the mirror in her dressing room. A man can be seen squatting down to “tie his shoes” right outside of her door.

His phone is propped up by his shoe and a pair of pants he took in the dressing room. The camera of the phone is facing inside of the woman’s dressing room.

“LADIES!!! beware of your surroundings!!!! this man was was recording me changing clothes in a dressing room at forever 21. we told the employees and another girl overheard and said he did the same thing to her,” issyr_ tweeted. “Two other people got a full description of him and we reported it.”

One other Twitter user said she experienced a similar incident at the Woodlands Mall, which is also in the Houston, Texas area.

“Same thing happened to my best friend when we were at forever 21,” Twitter user @peddieddie wrote in response. “He was in the stall next to her and he put his phone in his shoe and stuck it under the wall to record her.”

Many gave the woman suggestions regarding what they think she should have done.

One user suggested she bust open the door, smacking him with it in the process.

“Should’ve snatched the phone,” another said.

You could have easily bust the door wide open and smacked him but instead you watched him watch you.. I don’t get it

The woman responded to those who told her she should have handled the situation differently.

“1) i didn’t know if i was trippin or if this man was really recording me at first, so i didn’t feel like i had to jump right away to go after him, but i still recorded it as precaution,” she tweeted. “2) for everyone sayin i should have hit him w the door, it pulls inward not outward.”

Nevertheless, the majority of people showed her an outpouring of support.

“We’re programmed to doubt our instincts/intuition. I completely understand your reaction. Give yourself credit for reporting and providing a description,” Twitter user @DerbyCityLady wrote.

One told her she “handled it perfectly,” while another showed remorse over her getting “attacked” in the replies.

“It’s classic victim-blaming and why so many victims don’t come forward. You did nothin wrong,” Twitter user @PD_PhD wrote.

And what if you did address it and he flipped out? Honestly you handled it perfectly.

We’re programmed to doubt our instincts/intuition. I completely understand your reaction. Give yourself credit for reporting and providing a description.

Sorry you are being attacked. It’s classic victim-blaming and why so many victims don’t come forward. You did nothin wrong.

The Daily Dot has reached out to Forever 21.