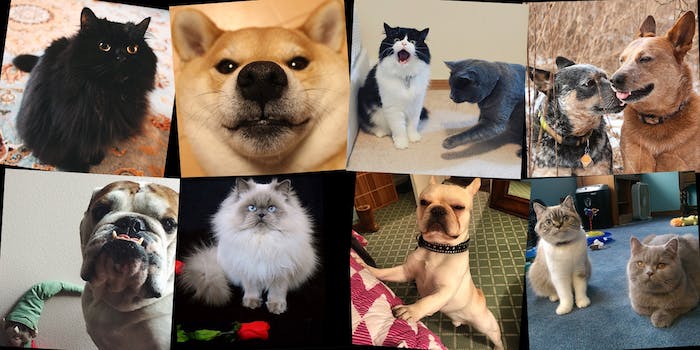 Looking back, 2014 was a spectacular year for pet celebrities. We got to know Grumpy Cat, famous for a peculiar expression caused by feline dwarfism; Marnie the Dog, a senior pup with a tilted head and a tongue constantly sticking out of her mouth; and Lil Bub, who overcame a kittenhood of suffering to become one of the wealthiest (and most generous) cats on the planet.

But as smartphone ownership grows globally—and as Instagram, once the playground of techies and teenagers, continues its march into the mainstream—the list of cute pets with social media accounts will only continue to grow.

So far, this year has been even more of a zoo than the last, with plenty of underdogs (LOL) climbing the ranks of pet celebrity status. Proud Shiba Inus, frolicking rag dolls, and bedraggled drunkard tabbies run rampant about the Web, showcasing their good looks and ludicrous antics. Here are some of 2015’s most promising up-and-comers.

I call these guys the Three Bros. You don’t wanna mess with them. They don’t have time for your b.s. because they’re straight chillin’.

Scuba’s intense lazy eye and Shadow’s unapologetic double chin make for the perfect villainous match, though their mutual love for each other makes it obvious that despite their strange looks, these kitties are pure of heart.

Not sure what she s doing…

I don’t even know where to begin with this pup. She’s sweet, photogenic, and oh-so-huggable—despite her apparent flatulence problem. This girl’s got star appeal, and she’s one to keep an eye on in 2015.

#elfieselfie #photobomb And to all a good night !