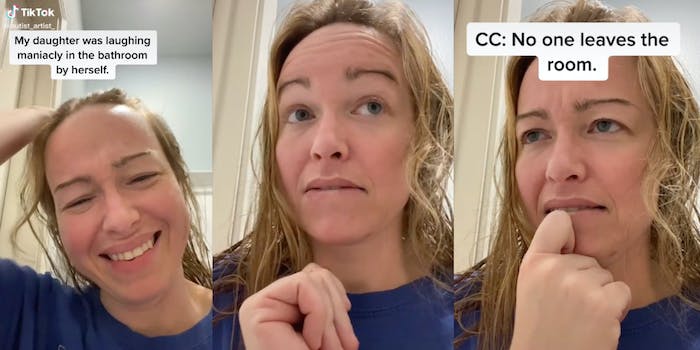 ‘Move out of the house now’: TikToker records her daughter’s creepy conversation with ‘imaginary friend’

'This was a sign for me to take birth control.'

A TikToker shared her daughter’s apparent conversation with an imaginary friend in a video that has fellow TikTokers encouraging her to move.

The TikToker, who goes by “Jess” and @autist_artist_on the platform, shared the video on Saturday. It has a whopping 2.3 million views.

At first, Jess said she thought her daughter, Ava, “manically laughing” to herself was “the cutest thing,” so she whipped out her phone and began recording. But she soon realized Ava was apparently speaking with someone while in the bathroom. “No one leaves the room,” Ava can be heard sternly saying after her laughter abruptly stops.

A door can also be heard shutting. Jess noted that even though the bathroom door slammed shut, no one left or entered the room.

Many viewers believe her daughter was talking with paranormal beings rather than imaginary friends, with one claiming there are definitely “some spirits” in the home because “kids can see them.”

“This was a sign for me to take birth control,” another TikToker said after watching the video.

“MOVE OUT OF THE HOUSE NOW!!” a third urged.

In a followup video, Jess recalls asking her daughter about the incident.

“I asked her, ‘Hey, what are you doing? Who are you talking to?’ And she said, ‘Uh, my friend,’” Jess says, adding that her daughter talked about having imaginary friends in the past but always refuses to go into detail.

But it seems like viewers will soon get to see Ava’s imaginary friends for themselves. In another video, Jess asks Ava to draw a photo of her imaginary friends. “Yes, but tomorrow,” Ava promises in response.