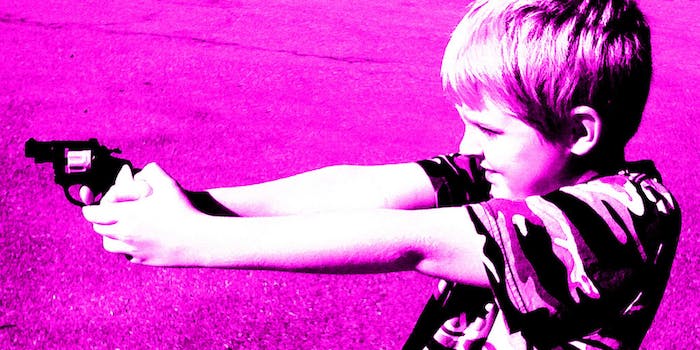 How to sell guns to children

The scariest children's book released this year is more than just an Internet joke.

Apparently, there are a growing number of American parents who feel the need to teach their kids about the Second Amendment. With gun owners supposedly under attack, and Obama making plans to take away everyone’s firearms, as well as all their other freedoms, these people are looking for an easy way to teach their children about the basic joys of gun ownership. The question is: Who will help these poor souls, petrified their children will grow up in a world where “the right to bear arms” doesn’t necessarily mean every American should own a gun?

A picture book intended to help educate children on the benefits and responsibilities that go along with being a gun owner, My Parents Open Carry (written by Brian Jeffs and Nathan Nephew, and illustrated by Lorna Bergman) tells the story of Brenna Strong and her parents, who proudly takes their guns everywhere, and openly share their stance on self-defence with everyone they come in contact with. Advocating “safe” and “responsible” fun, the book essentially reinforces the “only thing that stops a bad guy with a gun is a good guy with a gun” narrative the NRA has established in the last few years.

Unsurprisingly, many Internet reactions have been incredulous, although quite a few gun advocates are thrilled with the book. James Towle, host of American Trigger Sports Network, for instance, said it was “outstanding, outstanding … every person should buy five copies.”

But what’s really interesting about MPOC is how widely its notorious reputation has already spread across the Web. The Guardian ran a story about it that eventually got picked up in China. And even outlets that might otherwise lean conservatively have expressed concern. Keith Kendrick at family website parentdish (also based in the U.K.) warned the book had a “chilling message,” and Caitlyn Schmid of U.S. Catholic asked, “What if we decided as a nation to focus on a different ending of the story? To highlight the books that teach our children—the most impressionable and vulnerable learners among us—that we should not simply accept the fact that gun ownership is becoming mainstream.”

There’s a dark humor to the whole thing, too, as others have demonstrated. The wide-eyed, blank-faced characters of My Parents Open Carry, who blithely walk around with their guns on their hips, as unphased as if they were wearing fanny packs, can’t help but be comical in a surreal sort of way. And, of course, there’s the grammatical awkwardness of the title to pick apart, too.

my parents open carry sponsored by “national take your daughter to the range day” https://t.co/6YdkiSRkK6

“This kid’s book will be treasured + passed down to family members if they aren’t killed by handguns first.” https://t.co/z659x6E67W

I thought this was a joke, but perhaps it’s real: https://t.co/LGy7V06XPG I’m leaving society now. It’s been fun. Off to live in cave.

After getting over her initial shock at the book’s existence, children’s YA editor and publisher Elizabeth Law reacted by tweeting a photo of a proposed sequel entitled I Used to Have a Brother. And Amazon is ripe with hilarious fake reviews for the book, which basically troll its central ideas.

Considering My Parents Open Carry’s publisher White Feather Press, the message of the book isn’t too shocking—or, in context, too extreme. This is a company whose other titles include the likes of Church and State, Rumors of Eden, and most notable of all, Raising Boys Feminists Will Hate (a free copy of which is actually included when you order My Parents Open Carry.)

However, while My Parents Open Carry is certainly par for the course in terms of White Feather Press’ offerings, its presence in 2014 America shouldn’t be underrated. In some ways, its a book that’s significance only makes sense, taking into account where the country is at right now.

Long before My Parents Open Carry, children’s books, including picture books, have courted plenty of controversy. The list of these titles is long and varied. Some, like Maurice Sendak’s Where the Wild Things Are, are classics, which are hard to imagine eliciting any kind of outrage today. Others are children’s books in the “wink wink” sense, like Adam Mansbach’s Go the Fuck to Sleep, obviously intended more as a joke for people who have kids rather than for kids themselves. Then there are other children’s books that have been legitimately attacked for their stance on hot button issues, like Paul M. Kramer’s Maggie Goes On A Diet, a story crafted to teach kids about eating healthy in an increasingly obese America, which unfortunately could be seen as supporting anorexic tendencies based on its cover alone.

The Internet has only helped these books to maintain notoriety. Both unintentionally funny offerings (and more troubling ones) are perfect fodder for a meme-obsessed culture. The reaction on Twitter alone to My Parents Open Carry should let Jeffs and Nephew know that should they attempt to write anything similar in the future, the Internet will be there, waiting to make fun of them.

For all the concern the U.S. in theory places on protecting children, it is also increasingly perilous to figure out what’s actually appropriate for kids to engage with. Once again, the Internet and technology don’t help in this matter. It’s hard to tell a child why something like the infamous “Bomb Gaza” app is not only offensive, but also unacceptable for them to play, when as a basic game, it appeals to most children’s skill sets.

Outside of America, too, many seem to be less and less aware of how to send appropriate messages to children without being laughable or insulting. Just look at UNICEF’s “Take The Poo To The Loo” video they released early this year. Hypothetically, this is a fun little song about creating better sanitation in India. But in its presentation, it comes off as ridiculous, pedantic, and derogatory. Sadly, that it’s animated also makes it that much more likely that its greatest impact will be on children, who will both miss the real purpose of the video, while also being unaware of its potentially disrespectful undertones.

My Parents Open Carry has an agenda in a way way most children’s books do not. It’s capitalizing on the culture wars using a purposefully partisan approach. More than anything else, it’s reminiscent of the recent coloring book, We Shall Never Forget 9/11, a jingoistic bit of patriotism that asks kids to add their artistic touch to scenes like the death of Osama bin Laden. It could also be compared to the picture book, A Rule is to Break: A Child’s Guide to Anarchy, which had Tea Partiers up in arms over innocuous statements like, “Don’t look like everybody else! Be you,” “Think for Yourself!” as well as minutely less innocuous ones, like, “When Someone Says, ‘Work!’ You Say Why?”

That said, My Parents Open Carry takes the cake again as far as propaganda goes, because of where the gun issue stands in America right now. Its aim is fundamentally indoctrination, without taking any time to ponder whether the children its aimed at want to make up their minds about guns on their own.

Guns are already such an alarmingly casual part of everyday life for many Americans, it could be easy to shrug My Parents Open Carry off as the latest in a frustrating series of attempts to normalize something that will only further divide the country. But it’s more than that, too. Almost 10,000 American children are killed by guns each year, making this issue about more than the Second Amendment. In this light, gun control is about protecting the safety of thousands of innocent children, and for My Parents Open Carry to not only fail to acknowledge that, but to openly flaunt how wonderful guns are in the face of kids isn’t just grotesque, it’s actively harmful.

But then again, gun violence has become so commonplace in America by now, why bother? Mass shootings are such a regular occurrence in this country, they barely even seem newsworthy anymore. My Parents Open Carry is definitely an ugly piece of work, but its regular, ordinary, everyday approach to guns is so routine at this point, that its ugliness is hardly surprising.

Photo via agitprop/Flickr (CC BY 2.0)