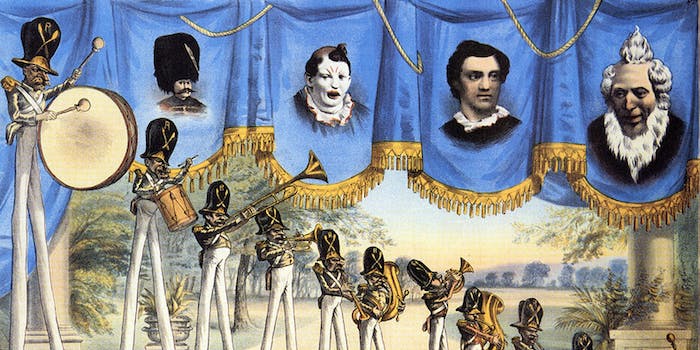 How social media changed our definition of ‘social’

Virality is no longer just a concern for brands and celebrities. It has trickled down to the masses.

This week, just over two centuries ago, Phineas T. Barnum was born. Barnum, founder of Barnum & Bailey Circus and a sly showman, delighted in attention-grabbing hoaxes. In one of his infamous tricks, he duped the media into printing a story of a mermaid specimen, actually a young monkey’s head and torso tied to a fish tail. Unsurprisingly, the saying “there’s no such thing as bad publicity” is generally attributed to him.

Contemporary marketers would describe Barnum’s stunts as going viral. Online, to “go viral” means to break away from the noise and capture the collective attention of the masses. It is to infect an unsuspecting population with an idea or a product, to replicate desire within the host almost in spite of itself, and then to be unleashed back into the public far and wide for the cycle to begin anew.

The site BuzzFeed appears to hold the recipe for regularly going viral: Its quizzes and listicles, shared relentlessly, have helped the site double in traffic over a year’s time—to over 60 million unique American visitors a month. The deodorant brand Old Spice has managed to accomplish virality a few times with goofy, tongue-in-cheek ads, and Jimmy Fallon and his Tonight Show team are similarly successful with twee skits, games, and musical performances that attract YouTube viewerships of millions.

Yet, virality is no longer just a concern for brands and celebrities. It has trickled down to the masses.

On a daily basis, users generate more messages than can be consumed by each other. This congestion overwhelmed Facebook and Twitter, justifying a competition of sorts—survival of that fittest to be shared. So the tools that just a few years ago were heralded for broadening media democracy (think Arab Spring) began reshaping the pathways to getting heard.

Facebook’s News Feed, for instance, is based on an algorithm that privileges posts it calculates to be of importance to you. (This manipulation, while not new, found itself in the spotlight upon the release of the controversial study that intentionally withheld positive or negative updates from the curated feed to examine its impact on user emotions.) The calculations are rooted in engagement metrics—likes, comments, and shares on Facebook. The ability to invoke participation from other users determines your place upon the new hierarchies formed on these platforms.

Social media metrics do have a necessary function. Life online can resemble the echolocation used by bats. Messages are sent out, and retrieving no replies signals emptiness. On Facebook, Twitter, or Instagram (and so on) you can’t know how many people view any given post—the blankness from a post unseen or a post seen-but-unreplied looks the same. Metrics provide certainty.

However, the observation of an act changes the act itself. Now that the faves and likes and reblogs have become the shorthand for validation on these systems, we in turn have begun to reshape ourselves in its image to be seen. In a post for New Inquiry, Rob Horning posits that social media metrics are “the newly reliable basis for the self.” Those fragments that are seen are those confirmed to exist; the identities we foster for ourselves are reinforced by the attention they receive online.

One of the shortcomings of social media platforms is the inability to convey nuance: These are systems built for brevity. That design has had far-reaching effects. With our lives captured in essentially sound bites, we have developed a flair for the melodramatic. We interact in ways that push each others’ buttons: we adopt bratty, flippant personas online; we jab until we produce visceral reactions; we alternately whisper in all lower-case or shout in upper-case aware that commanding attention against the noise is to draw listeners closer or to overpower it.

And for being at turns outraged, needy, snarky, boastful, and sentimental, we are rewarded with responses. Through being flattened, we then can be more easily amplified.

But this does not come without a cost, for spikes of emotions leaves one vulnerable to getting impaled. Is it any surprise that our dialogues on social media, where we willingly present caricatures of ourselves outlined by a seemingly never-ending stream-of-consciousness id, should act as kindle for conflict? Arguments erupt over our sloppiness, our imprecision, our recklessness, and spread like wildfire fuelled by the likes, fave, retweets that govern the system.

In a recent Guardian column, Dorian Lynskey writes that “the Internet amplifies and facilitates the impulse to think the worst of people you have never met and to ignore any facts or context that might take the wind out of your indignation.” We acquire a sort of road rage. Grace, like nuance, has no place online, for it may be misinterpreted as weakness or avoidance. And why lose the satisfaction of landing a retort that could draw stadium cheers from a hungry audience? This is high drama: Are you not amused?

From all this springs the allure of an “eject” button. I have seen friends, exhausted and bruised, declare social media holidays and shift the balance back to their offline lives. But it’s not, as some presume, because they view the offline as more real or valuable: in fact, it’s because they value their online interactions so much that they desire time to recover.

It’s tempting to frame the tension as between online and “in real life,” but that would be an incorrect distinction. Rather, the problem lies in how social media has skewed our definition of “social.” Our online interactions are never just between each other; instead, they are between you, me, and the machine that mediates it.

Communicating with an eye on the machine in the clouds, we have all become Phineas T. Barnum, having realized that to be heard by our network of friends, followers, and fans is to ache to be viral, crafting posts that appeal for likes, favourites, and reblogs. That’s the thing about incentives: they can go from being motivators toward a goal to becoming the goal themselves.

What’s saddening is all that goes unsaid and unseen. We soothe ourselves with the theory that the internet allows infinite possibilities for expression, but in practice it is much more limited. We get seduced by the idea that we could access nearly anyone, and we miss that algorithms are making us invisible to our friends, guided by calculations that can’t account for the offline.

And unless we acknowledge this, we will acclimate to this as a standard, as a given. As my friend technology writer Navneet Alang put it: “First you produce the machine to read the world. Then you remake the world as machine readable. A landscape composed of commodities.”

We are as valuable in social media as our willingness to be commodified. So wowed by technology, we twist and bend ourselves to better its needs—or, perhaps, more accurately those of its owners. So what if we must imagine a monkey tethered to a fish tail as a mermaid, if it means an audience to see it?

Photo by MCAD Library/Flickr (CC BY 2.0)