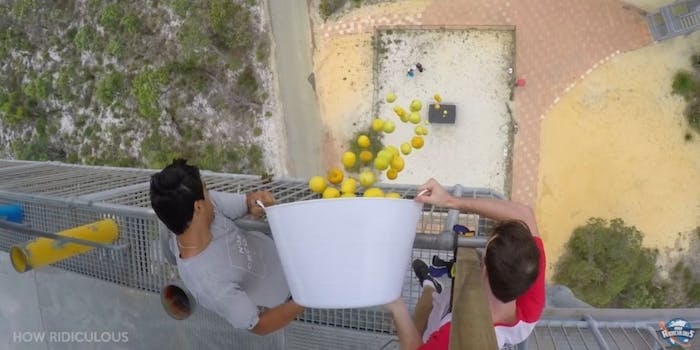 They’ve brought back the ridiculously strong trampoline, as well.

The How Ridiculous YouTube channel has scored huge viral hits lately, accumulating about 36 million combined views by pitting a bowling ball vs. a trampoline from 150 feet in the air and a 60-pound ice block vs. that same trampoline from the same height.

Which obviously means How Ridiculous needs to test out something else on a trampoline. How about 200 potatoes and a ridiculous amount of lemons?

But instead of trying to break the trampoline with the enormous weight of gravity-laden objects, now they’re trying to catch the pieces of produce as they bounce high into the air.

It actually stays intriguing until the end of the video when one of the YouTubers tries a change in strategy.