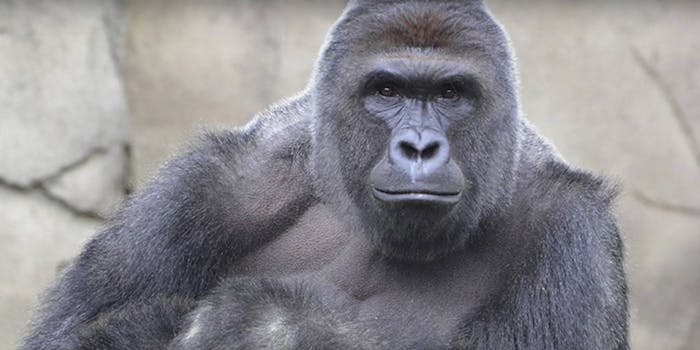 Let's just change the Heisman to the Harambe trophy already.

What have you done for Harambe lately? It’s a question countless folks ask themselves on a daily basis and certainly something I contemplate on the regular. My last Harambe tribute came in the form of a press request to Orlando Bloom‘s publicist. You know, just to see if he’s in support of the dicks out for Harambe movement.

That lone email is nothing compared to an entire football season, which is precisely what Boston College QB Patrick Towles is gifting the fallen gorilla when he takes the field this year.

Boston College was an absolutely abysmal team last season, winning a mere three games and losing every single ACC match-up. A hail Mary to Harambe may be exactly what the Eagles need to go all the way.

The college football subreddit has already sang its support of Towles, who made his announcement in an Instagram post on Thursday.

With BC QB Patrick Towles dedicating his season to #Harambe, some of our readers pointed us to this track: pic.twitter.com/7ecetM8jhf

Fans are hoping the tributes extend will beyond the gridiron and spill into Boston College’s “Screaming Eagles” marching band. The spirit is certainly there for spectators.

The Summer of Harambe pic.twitter.com/WkBVpYTNGx

Towles’ tribute rounds out an incredible week for Harambe activists. A petition to erect a Harambe memorial just outside the White House has garnered over 200 signatures in less than 24 hours, folks have been filling the Cincinnati Zoo’s Twitter mentions with Harambe love, and some hero erected a shrine at this weekend’s Quake Con in Dallas, Texas.

There is a Harambe shrine at @QuakeCon BYOC – leave your offerings of bananas, ramen or beer. #QuakeCon2016 pic.twitter.com/hMUBozJlGI