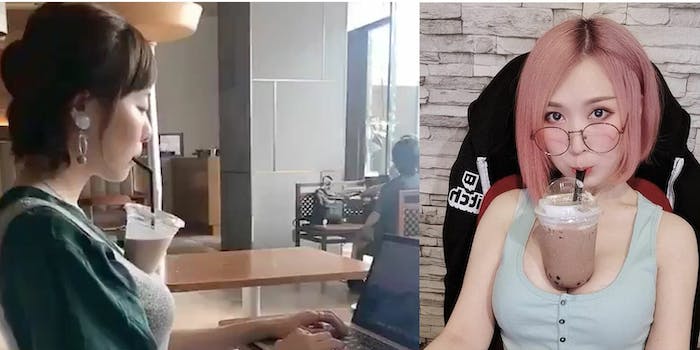 This bubble tea challenge is a balancing act

It's already inspiring a lot of fan art.

Coming from Japanese Twitter where it’s quickly gone viral, the Hands-Free Bubble Tea Challenge features women, and some men, trying to drink from a cup balanced on their cleavage.

The challenge came from a video posted by model @hcupadman featuring her using both hands on a laptop while drinking from a cup cunningly lodged between her cleavage. In the tweet, she cites balancing the tea as one of the advantages of having large breasts.

People quickly responded by putting up their photos showing them balancing bubble tea and other objects on their chest.

Though it wasn’t originally intended as a poorly disguised way to brag about breast size, it does seem to have picked up overtones of that when it morphed into a challenge. However, unlike previous “ideal body” challenges like the pen challenge and the “bikini bridge,” a lot of the entries came in artistic form.

Popular way to drink boba milk tea in Japan.
Star:Marco!where are you watching!!!
–
Who tf will drink it like that?
…
Damn. I dropped my drink on the ground #StarVsTheForcesOfEvil #手放しタピオカ pic.twitter.com/lGeorZUgut

Some people are even posing dolls in the hands-free position.

One of the early propagators of the Hands-Free Bubble Tea Challenge, @Strangestone—who is the artist behind the previously viral Tawawa challenge, where women balanced phones and then later other objects on their breasts—produced a sketch of it, which may be why others are responding with their own art.

This gives it a lighter, and healthier, vibe than those other body-related challenges, though of course there’s still an element of mockery aimed at the women who can’t play.

The challenge is striking big in the Philippines, a country that loves bubble milk tea, as well as Malaysia.

Given the fad for bubble tea in the west, it’s only a matter of time before the challenge makes it over here, too.